If Security Council Fails, Violation of UN Charter Should Go Before International Court of Justice 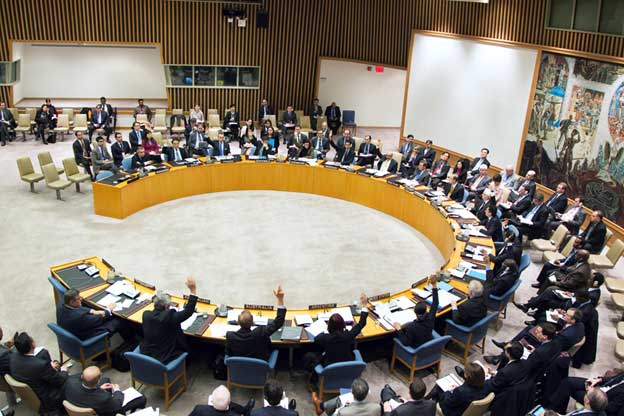 UNITED NATIONS, Feb 23 2022 (IPS) - The widening political crisis in Ukraine, which has taken a turn for the worse with the declaration of two new independent states—the Donetsk People’s Republic and the Luhansk People’s Republic — is likely to prove once again the ineffectiveness of the 15-member UN Security Council (UNSC).

The UN’s most powerful political body, whose primary mandate is the maintenance of international peace and security, has remained paralyzed because of the threat of a double veto by Russia and its new found ally China against any possible sanctions or resolutions condemning Russia for an attack on Ukraine’s sovereignty and its territorial integrity – and a resulting violation of the UN charter.

UN Secretary-General Antonio Guterres, who abruptly cut short an overseas trip, declared: “Let me be clear: the decision of the Russian Federation to recognize the so-called “independence” of certain areas of Donetsk and Luhansk regions is a violation of the territorial integrity and sovereignty of Ukraine.”

“Our world is facing the biggest global peace and security crisis in recent years – certainly in my tenure as Secretary-General. The principles of the UN Charter are not an a la carte menu. They cannot be applied selectively”.

He said the UN’s 193 Member States have “accepted them all and they must apply them all”.

“I am also concerned about the perversion of the concept of peacekeeping,” he said, criticizing the Russians, who claimed that any troop movements in and around Ukraine were meant for purposes of “peacekeeping.”

Andreas Bummel, Executive Director, Democracy Without Borders, told IPS the Russian invasion of Donetsk and Luhansk is a blatant military aggression and a clear violation of the UN Charter.

President Putin, he pointed out, has put into question the existence of Ukraine as an independent state. “Russia’s actions obviously represent a breach of international peace and security which must trigger international sanctions.”

It is not acceptable, he argued, that Russia can use its veto right in the Security Council to stop an effective response of the UN or even a condemnation. As Russia is acting only in its own interest, the use of the veto in this case is a misuse of this privilege, he noted.

The International Court of Justice (ICJ) in The Hague should be called upon to examine whether such a
misuse can be reconciled with the UN Charter, said Bummel.

“In addition, given the Security Council’s impotence in this situation, the UN General Assembly needs to assume its subsidiary competence as the UN’s highest body”.

Under the principle of “Uniting for Peace”, he pointed out, an emergency meeting of the General Assembly should be held that overrules a Russian veto in the Security Council and which mandates sanctions or other measures it deems necessary.

Speaking from the White House, US President Joe Biden condemned President Putin for his aggression against Ukraine, saying that Russian action is “a flagrant violation of international law and demands a firm response from the international community.

The US imposed a set of new sanctions—particularly against Russian oligarchies, their families and Russian banks.

“Who in the Lord’s name does Putin think gives him the right to declare new so-called countries on territory that belonged to his neighbors? Biden asked.

Putin, in an address to the nation, claimed that all of Ukraine was “created by Russia” and described the country’s pro-Western government as a threat to Russia.

James Paul, former Executive Director the New York based Global Policy Forum and author of “Of Foxes and Chickens”—Oligarchy and Global Power in the UN Security Council” told IPS the veto power certainly tends to freeze Security Council action whenever the core interests of the five Permanent Members are in conflict.

“This has always been a deep problem of the Council and prevented it from being effective, not only when vetoes are cast but also when they lurk in the background and sabotage action”.

In the case of Ukraine, he argued, the problem is not just in the present moment of high danger but in the whole long build-up that has centered on the post-Soviet security architecture in Europe and the eastward expansion of NATO.

In theory, he pointed out, this might have been managed by the Council and a security system for Europe built that would have included Russia. “Instead, we saw a whole series of moves by the United States that the Russians saw, not unreasonably, as threatening”.

Activities in the Council and veto-use have exacerbated US-Russian hostility rather than easing it, said Paul, a prominent figure in the NGO advocacy community at the United Nations and a well-known speaker and writer on the UN and global policy issues.

Meanwhile, the UNSC has remained politically impotent because the veto powers of the big five, namely the US, UK, Russia, China and France (P5), have always been a major obstacle in resolving some of the world’s ongoing military conflicts and civil wars – whether in Afghanistan, Iraq, Syria, Libya or Yemen.

Asked about the deadlock and the potential veto by Russia, US Ambassador Linda Thomas-Greenfield said: “We get things done by engaging every single day with other countries, because sometimes the veto power isn’t as powerful as you might think when other countries are unified in expressing their concerns”

Mandeep S. Tiwana, Chief Programmes Officer at CIVICUS, a global alliance of over 9,00 civil society organisations in more than 175 countries, told IPS the veto power of the permanent members of the Security Council has been a major impediment to saving future generations from the scourge of war as promised in the UN Charter.

Selective invocation of outrage by the P5 over military aggression, war crimes and crimes against humanity is a major impediment to achieving peace in our times. Civil Society groups, he said, have lobbied hard for many years to get the P5 to voluntarily give up their arbitrary veto powers to no avail.

Ironically, the P5 who are supposed to maintain international peace and security continue to be major producers and proliferators of weapons of war which fuel major conflicts, he declared.

Elaborating further, Paul said the Council has been a wrestling ring, a stage for enacting battles and for staging arguments to win over public opinion and media coverage.

The US has been able to count on the UK and France much of the time and whip many elected members of the Council into line as part of this drama.

“So, what we see today is a Council that is (as so often in the past) sidelined while other initiatives like the Franco-German effort take place beyond the UN. We see Germany acting more robustly than in the past, as the most powerful European state. The Europeans can’t use the Council, so they are using other means”.

“The veto is and always has been the Council’s political disease”, declared Paul.

In the 76-year history of the UN, the US has exercised an estimated 82 vetoes, and USSR 91, and its successor state, the Russian Federation about 28 vetoes.

“That includes all of Ukraine. It includes Finland. It includes Belarus and Georgia and Moldova, Kazakhstan, Kyrgyzstan, and Tajikistan, Turkmenistan, Uzbekistan, and Lithuania, Latvia, and Estonia. It includes parts of Poland and Turkey,” she said.

In essence, Putin wants the world to travel back in time. To a time before the United Nations. To a time when empires ruled the world. But the rest of the world has moved forward. It is not 1919. It is 2022, she added.

“The United Nations was founded on the principle of decolonization, not recolonization. And we believe the vast majority of UN Member States and the UN Security Council are committed to moving forward – not going back in time”.

“We must all stand with Ukraine in the face of this brazen attempt to usurp Ukraine’s sovereign territory. There can be no fence-sitters in this crisis,” she declared.