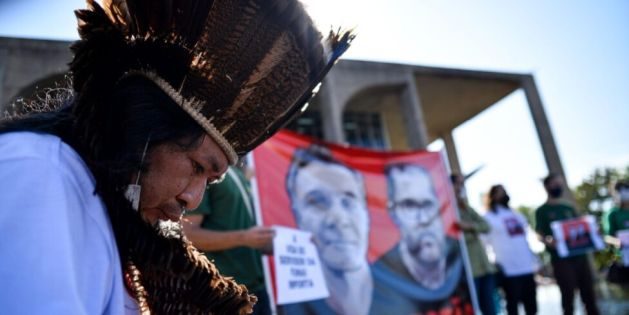 An indigenous protestor demonstrates outside Brazil’s Ministry of Justice in June, following the disappearance of Dom Phillips and Bruno Pereira in the Amazon. Their murders drew global attention to the dangers environmental defenders face in the region (Image: Antonio Molina / Foto Arena / Alamy)

BUENOS AIRES, Oct 7 2022 (IPS) - Since November 2020, the threats, intimidation and pressure I have experienced due to my work in defence of human rights and nature are similar to those suffered by dozens of leaders living in the region. I have lived through the assassinations of three friends and environmental leaders.”

Óscar Sampayo has actively opposed oil and mining developments in the Magdalena Medio region of Colombia, documenting their impact on the local community and environment. He has been threatened on several occasions by paramilitary groups involved in drug trafficking, such as the Águilas Negras, or Black Eagles.

After Brazil, Colombia is the country with the second highest number of murders of environmental leaders in the last decade, according to the latest report by British human rights NGO Global Witness. Since 2012, a total of 1,733 activists have been killed worldwide, with 68% of cases occurring in Latin America.

The figures underestimate the true scale of the violence, the authors of the “Decade of Defiance” report add. Many cases go unreported as they occur in conflict zones or in places where there are restrictions on press freedom and civil society, and inadequate independent monitoring of attacks.

In addition, few perpetrators of killings are brought to justice because governments fail to adequately investigate the crimes. Authorities, the report says, either ignore or actively obstruct investigations into killings, often “due to the collusion between corporate and state interests”.

“All over the world, Indigenous peoples and environmental defenders risk their lives for the fight against climate change and biodiversity loss. Activists and communities play a crucial role as a first line of defence against ecological collapse,” said Mike Davis, Global Witness’ CEO.

A decade of killings

Since Global Witness began reporting on environmental defenders ten years ago, Brazil has had the highest number of killings. Around a third of the 342 activists killed in the country since 2012 were indigenous or Afro-descendant, and more than 85% of the killings took place in the Brazilian Amazon. 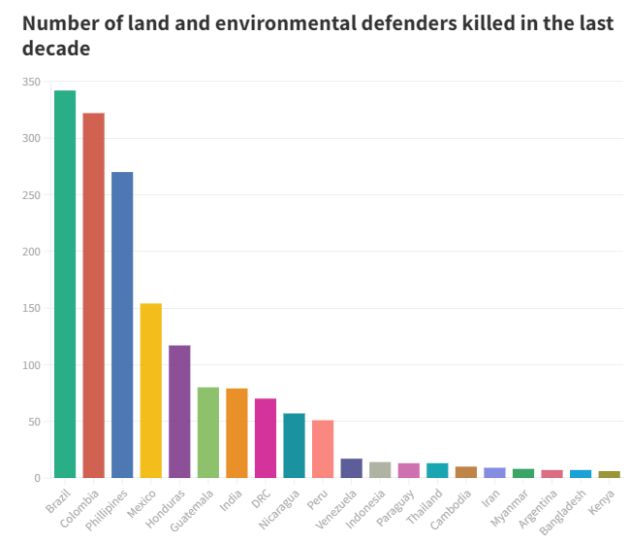 The Amazon has become the main arena for violence and impunity against defenders, the report’s authors say. Since President Jair Bolsonaro came to power in 2018, deforestation and illegal mining have been encouraged, while the budgets of forest protection agencies have been cut.

Earlier this year, the murders of British journalist Dom Phillips and a local indigenous expert, Bruno Pereira, drew global attention to conditions in parts of the Amazon. Phillips and Pereira had travelled to the Javari Valley, an area known to be a hotbed of illegal activities.

“For protesting against these environmental crimes and harms to our health, we have been subjected to death threats, legal harassment and smear campaigns,” says Eliete Paraguassu, a Quilombola woman from the state of Bahia. “We will continue to fight the systematic environmental racism enacted toward Quilombos and the indigenous communities of Brazil.”

“All over the world, Indigenous peoples and environmental defenders risk their lives for the fight against climate change and biodiversity loss. Activists and communities play a crucial role as a first line of defence against ecological collapse”

In Colombia, the signing of the peace agreement with armed groups is now more than five years old, but its implementation has not been adequate, Global Witness states. This has maintained land disputes and violence towards the most vulnerable groups, such as small- and medium-scale farmers and indigenous peoples.

Such was the case of Sandra Liliana Peña, a leader of an indigenous community in the department of Cauca, one of the bloodiest areas of the country. She had spoken out against the growth of illegal crops and subsequently suffered threats. In 2021, she was shot dead by four armed men.

Mexico has also become one of the most dangerous countries for environmental defenders, with 154 murders recorded in the last decade, most of which took place between 2017 and 2021. Forced disappearances are now commonplace, carried out by organised criminal groups and corrupt government officials, the report reads.

Indigenous territories in Mexico are said to be particularly vulnerable to large-scale extractive projects led by national and foreign companies, and supported by the government. Concerns have been expressed by the Inter-American Commission on Human Rights over the lack of consultation with communities, and over attacks on those who oppose such projects.

Global Witness highlights a case from September 2021, when authorities discovered six sets of human remains near community land belonging to Yaqui peoples, in the south of the state of Sonora. The remains were thought to belong to some of a group of ten men who had disappeared the previous July. After multiple disappearances, the community targeted companies interested in Yaqui land. While officials blamed drug cartels, some community members reportedly suspect government and corporate involvement.

Global Witness declares that the situation for environmental defenders around the world has worsened rather than improved in recent years. The growing climate and biodiversity crises, as well as the expansion of authoritarian governments, have given rise to an increase in killings since 2018.

In 2021, the year analysed by the recent report, 200 environmental defenders were killed – or four per week. Mexico was the country with the highest number of murders (54), followed by Colombia (33) and Brazil (26). Nearly 80% of the killings in Brazil, Peru and Venezuela were in the Amazon.

Despite the grim statistics and the increase in the number of deaths in recent years, researchers highlight some progress. In Honduras, a former energy executive was sentenced in June this year to 22 years in prison for ordering and planning the murder of activist Berta Cáceres in 2016.

Also highlighted as cause for encouragement is the Escazú Agreement, which entered into force in 2021. It is the first treaty on environment and human rights for Latin America and has among its objectives to prevent and investigate attacks on environmental defenders. Twelve Latin American countries have now ratified the agreement, including Mexico, though others such as Colombia and Brazil have yet to do so.

Global Witness calls on governments to ensure the safety of environmental defenders by creating new laws where they do not exist and enforcing existing ones. At the same time, companies must identify and mitigate any harm from their operations on defenders and ensure corporate accountability at all levels of action.

“Each and every death of a defender is a sign that our economic system is broken,” Global Witness affirms. “Fuelled by the pursuit of profit and power, there is a war over nature and the frontlines are the Earth’s remaining biodiverse regions.”