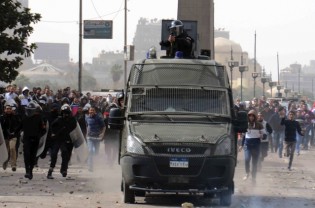 By Adam Morrow and Khaled Moussa al-Omrani
Concerns are mounting over Egypt’s future after the outbreaks of violence that marked the second anniversary of Egypt's January 25 Revolution. Massive anti-government rallies led to ongoing clashes between protesters and security forces that have left at least 40 people dead. Cities along Egypt's Suez Canal faced a government-declared state of emergency.
ADVERTISEMENT ADVERTISEMENT