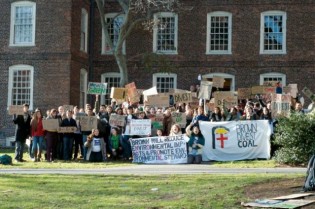 By Carey L. Biron
Nearly a dozen U.S. cities have announced their interest in withdrawing municipal investments from fossil fuel companies, joining a fast-growing movement among colleges and universities that supporters say is allowing citizens concerned with environmental degradation and global climate change to act in lieu of federal action from the U.S. Congress.
ADVERTISEMENT ADVERTISEMENT