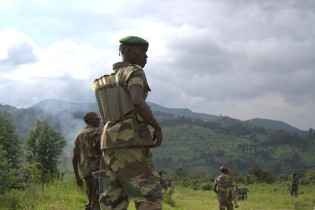 By Passy Mubalama
The children of deceased police and army officers in North Kivu, eastern Democratic Republic of the Congo, are finding themselves forced to adopt their late fathers’careers in the armed services to help their families survive.

By Taylor Toeka Kakala
On the way to his fields, Denise Mambo, a resident of Kitshanga, North Kivu in eastern Democratic Republic of the Congo, stops at a rope laid across his path.
ADVERTISEMENT ADVERTISEMENT