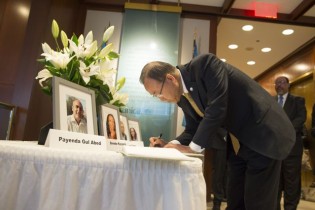 By Thalif Deen
When the United Nations spent over 2.2 billion dollars refurbishing its ageing 65-year-old Secretariat building, one of its primary goals was to strengthen security to prevent any violent attacks on the glass house by New York city’s East River.

By Thalif Deen
The deadly Syrian military conflict - now entering its fifth year - which has claimed the lives of over 200,000 mostly civilians, including women, children and aid workers, has not spared the United Nations either.
ADVERTISEMENT ADVERTISEMENT