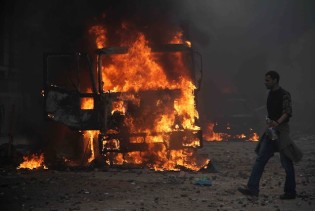 By Hisham Allam
Bloody clashes erupted in Cairo on Sunday Oct. 6 between supporters of the military and followers of ousted elected president Mohamed Morsi as the latter protested against the July military coup that deposed their leader. But as clashes occurred on the streets, a clash of ideologies has been occurring on the country’s 50-member committee as it amends Egypt’s constitution.
ADVERTISEMENT ADVERTISEMENT