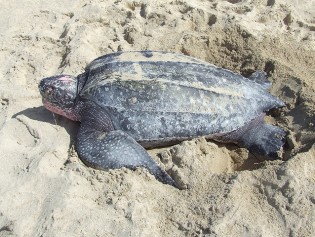 By Desmond Brown
Ordinarily they live for at least half a century. But at least 20,000 leatherback sea turtle hatchlings never made it past their nesting ground at Grand Riviere, a stretch of shoreline along Trinidad's north coast, in what's been described as "an engineering disaster" last weekend.
ADVERTISEMENT ADVERTISEMENT