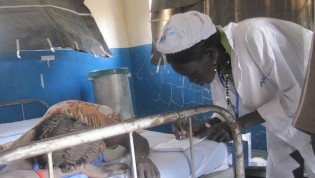 By Carey L. Biron
Within the next nine days, drinking water at refugee camps in South Sudan's Upper Nile state will run dry, warned the aid agency Doctors Without Borders on Tuesday. Meanwhile, refugees continue to stream into the state, as the few camps set up to house to entrants are stretched even further beyond capacity.
ADVERTISEMENT ADVERTISEMENT