TEL AVIV, Mar 6 2009 (IPS) - If all goes to plan, passengers will not get to see the beautiful Yitla Stream, or what is left of it, on the train from Jerusalem to Tel Aviv. 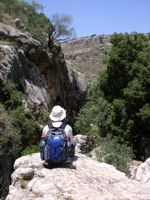 Construction plans at present include a 144-metre bridge over the mini- canyon in the Jerusalem Hills known as the Yitla Stream. Local people and environmentalists want instead a tunnel link under the Stream in order to keep the habitat intact.

Israel Railways has been working on a new high-speed train link between Jerusalem and Tel Aviv via Ben Gurion Airport for the past six years. Some of the western part of the track close to Tel Aviv and the airport has been built, but the stretch through the Jerusalem Hills is still on paper.

The most controversial plan is that for a bridge to link tunnels at either end. The Nature and Parks Authority, along with the Society for the Protection of Nature have been leading opposition to the planned bridge.

“In the morning or in the afternoon, I come down here and then quickly climb that ascent there – and that’s my heart widening,” says Eyal Arad, resident of the nearby village Nataf over a late afternoon coffee on top of the gorge cliffs, metres away from where the bridge is supposed to be built. Arad has been hiking here for the past seven years, out of 21 years of living in Nataf, and doing what he can to protect it. He has put up a big sign asking four- wheel-drive vehicles to keep distance. It is the train that he cannot stop.

On the present train line it takes 83-97 minutes from coastal Tel Aviv to mountainous Jerusalem. Ironically, it takes half that time by road, off rush hour.

But given the rising traffic load on Motorway 1 that connects Tel Aviv with Jerusalem, there is wide backing for a fast train link that could cut the 65- kilometre train distance to a 28-minute ride.

The dispute over Bridge 8 over the Yitla gorge has been in the way. “The Yitla Stream is situated in the heart of one of the best preserved Mediterranean grove areas in the Jerusalem Mountains,” says Ze’ev Hacohen, ranger from the Nature and Parks Authority.

“This bridge is utterly unnecessary,” says Avraham Shaked, Jerusalem district nature conversation coordinator at the Society for the Protection of Nature in Israel. “The only way the train to Jerusalem can go is in a tunnel, beneath the stream.”

The Israel Railways scheme that includes the bridge could scare away gazelles, falcons and hyenas, and threaten a variety of endangered flora and fauna.

The Nature and Parks Authority notes that “in the vicinity of the planned railway bridge 8 site lies a canyon, among the deepest and the most impressive in the Jerusalem Mountains, that functions as a habitat for a variety of cliffs plant species and as a nesting site for predators species like falcons, buteos and eagle owls.”

An independent committee headed by Prof. Ezra Sadan published a report in October last year acknowledging the ecological importance and sensitivity of the Yitla gorge, and the benefit of an underground alternative for the train. It argued against further delaying the project, and endorsed the bridge plan but with modifications to minimise environmental impact.

Led by Shaked and Hacohen, the environmental organisations are not giving up just yet. They blame the railways company for inefficiency, and for letting the cost of the project rise from 2.3 billion shekels (512 million dollars) in 2004 to roughly 7 billion shekels today (1.67 billion dollars), while ignoring the environment. “It wouldn’t have happened in Germany, Austria, Switzerland, France or any other place,” said Shaked. “There wouldn’t have been a need for environmentalists to battle.”

Yaron Ravid, manager of the control and coordination division of Israel Railways says that the present scheme foresees completion of the project within six to seven years. “If the environmentalists continue fighting this train line, it would be delayed and eventually gone,” he says. “Currently, it’s delayed only because of them.”

March is the time for a raptor to chase a crow above the colours of the flowers along the Yitla Stream. This March it is also time for a decision on the bridge, with the deadline approaching for filing objections to it.

Arad is doing his bit. “On weekends, in good weather, this area is flooded with hikers. Half an hour away from Tel Aviv, this is the nearest place for excursions. So, everyone I meet I urge to come and visit. I say, come quickly before it’s ruined.”

And Shaked is campaigning in his own way. “We might have trains to anywhere in the country, but we might be left with no country at all.”

*This story is part of a series of features on sustainable development by IPS – Inter Press Service and IFEJ – International Federation of Environmental Journalists.