MBABANE, Mar 19 2011 (IPS) - Swaziland’s autocratic government is facing a growing challenge as a sharp decline in customs revenue forces budget cuts. Thousands of protesters brought the Swazi capital of Mbabane to a standstill Friday as they took to the streets to oppose imminent salary cuts to civil service wages – and demand changes to the country’s government. 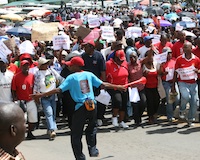 Protests against proposed wage cuts are combined with demands for a new government. Credit: Mantoe Phakathi//IPS

Over 7,000 people, including public service workers and members of civil society organisations, marched to the office of the prime minister, Barnabas Sibusiso Dlamini, demanding that the entire cabinet be removed because they have failed the country.

The Swazi government is proposing a 4.5 percent salary cut for public servants as well as freezing annual salary increases in an effort to reduce the wage bill by five percent. Wage negotiations were suspended until further notice in November last year.

“Public servants have to make a decision on whether they want to be paid 100 percent of their salaries and get nothing at all or get a reduced wage until the situation gets back to normal,” said Finance Minister Majozi Sithole.

Wage cuts are never popular, but Swaziland's government has done itself no favours ahead of proposing austerity measures.

Finance Minister Majozi Sithole cut a rod for his own back when he admitted in February that the government is losing up to 11 million dollars a month due to corruption.

"This government is not fit to lead us," said Sibongile Mazibuko, the president of the Swaziland National Association of Teachers (SNAT). "It’s corrupt to the core."

King Mswati III’s extravagance in the face of Swaziland's crushing poverty - nearly two-thirds of the population lives below the poverty line - is also not helping the situation. The royal family enjoys lavish resources, including the tax-free profits of the Tibiyo Taka Ngwane conglomerate.

Tibiyo - established in the 1950s with public funds - has interests in agriculture, manufacturing, property and media, with shares in many of the country's most profitable enterprises.

Profits from Tibiyo Taka Ngwane fund the royal family and national cultural activities such as the reed dance and incwala.

It operates as a royal company and does not pay tax. Its director, Themba Dlamini, has justified this by saying that its subsidiary companies are already taxed, but the International Monetary Fund criticised this arrangement saying taxing Tibiyo could make a meaningful difference to the national coffers.

Mario Masuku, president of the Peoples United Democratic Movement (PUDEMO), a political party proscribed by the Prime Minister under the controversial Suppression of Terrorism Act, says Tibiyo Taka Ngwane belongs to the people.

"This is a company established from our money yet the royal family has monopolised it," said Masuku. Civil society organisations have demanded the nationalisation of Tibiyo.

Meanwhile, public servants were outraged to discover that government is no longer remitting pension contributions to the Public Service Pension Fund (PSPF).

Civil servants have a monthly contribution of five percent of their salaries deducted for the PSPF; government is supposed to put in an amount equal to 15 percent.

Mazibuko told IPS that the government had entirely suspended remitting pension payments to the PSPF - although it has continued to deduct five percent monthly wage slips.

"We’ve heard that these are all desperate efforts by the government to keep paying salaries because it has run out of money," said Mazibuko.

The government has not disputed the allegation.


Swaziland has been dealing with a series of financial crises due to a 60 percent fall in receipts from the Southern African Customs Union. SACU revenue – which divides a common pool of revenue from customs and excise duties between Swaziland, South Africa, Botswana, Lesotho, and Namibia – previously provided more than half of Swaziland’s budget.

Salaries represent the biggest challenge for the government in light of shrinking income. The country’s civil service wage bill accounts for 18 percent of GDP – the highest in the region – and the proposals to cut wage are outlined in Swaziland’s Fiscal Adjustment Roadmap, a recovery plan presented to the International Monetary Fund and World Bank to qualify for budget support.

Not our fault, say workers

Civil servants reject the proposed wage cuts – their anger fuelled by reports of corruption as well as the fact that while the government is already struggling to execute the $1.4 billion budget presented in Parliament in February, it has increased the value of exit packages and perks for politicians.

For example, the wives of former prime ministers will now receive salaries, and enjoy medical aid and funeral benefits courtesy of the state.

“We’re told to fasten our belts while politicians have the audacity to increase their packages,” said Sibongile Mazibuko, the president of the Swaziland National Association of Teachers (SNAT).

“We don’t owe government anything, therefore we are opposing the imminent salary cuts,” said Winile Dlamini, a primary school teacher. “This fiscal crisis is not our fault.”

Dlamini, who took part in the march in a wheelchair, said it is time Swazis seized the bull by the horns and ousted this government.

Mduduzi Gina, the secretary general of the Swaziland Federation of Trade Unions (SFTU), said the march was also a build up to demand a change to the Tinkhundla system of governance in which the King appoints the prime minister and cabinet, as well as a total of 30 members of the upper and lower houses of parliament.

“Nothing can stop us from ensuring that what happened in Tunisia and Egypt also takes place even here,” Gina told the crowd, to enthusiastic applause.

Multi-party democracy was among the demands put forward, as many protesters agreed that the country needs to overhaul its system of governance, which they said makes politicians accountable to the King rather than the people.

Although police maintained heavy surveillance throughout the six-hour march, there was no confrontation between them and the protesters.

In a first response to the gathering crisis, the prime minister called a press conference at 10 p.m. on Friday, announcing a shuffle of principal secretaries which left the PS at Defence, Dr John Kunene, without a job.

This move is unlikely to be enough. Civil society plans to return to the streets in April with one goal in mind – to get rid of the government.
Tweet
Republish | |