MEDIA-LATIN AMERICA: The Seduction of Power

MONTEVIDEO, Jun 24 2011 (IPS) - The governments and big private media groups in Latin America are waging a war to win over public opinion, the ultimate arbiter of legitimacy, and the only solution would appear to be to strike up an alliance. 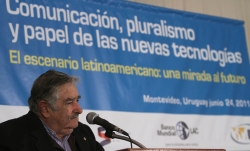 “Battle” was the most oft-repeated term in the seminar on “Communication, pluralism and the role of new technologies; the Latin American scenario: looking towards the future”, organised Friday Jun 24 by the Inter Press Service (IPS) news agency with the support of the World Bank and the Uruguayan government.

Journalists and editors of public and private media outlets, representatives of civil society and governments, and experts on communication from the region took part in the seminar.

The battle between the State and private media for control of news management has come to the forefront in recent years in Latin America, as left-of-centre governments have been elected in most countries in the region and have found themselves embroiled in confrontations with powerful media interests.

Left-wing governments have had to negotiate peaceful coexistence with the economic elites, but at the same time they have sought to transform communications, attempting to democratise the media, by passing news laws for example, said Fábio Zanini, international editor at the Brazilian daily Folha de Sao Paulo.

Zanini cited the example of former Brazilian president Luiz Inácio Lula da Silva (2003-2011), who in order to be elected “had to build a strategic media-savvy political movement to show the banks, ‘big capital’ and the large landowners that he was trustworthy and reliable, and to draw right-wing parties into his coalition.”

Basically, leftist governments, and right-wing administrations like the government of Sebastián Piñera in Chile as well, have recognised the vital importance of the media, with which “they have a conflict-ridden relationship,” Zanini said.

Uruguayan presidential secretary Alberto Breccia preferred to describe the relationship between the left and the press as “schizophrenic,” and urged the participants to help make it healthier.

Zanini underscored the efforts of governments to expand their means of communication, by establishing or overhauling public TV and radio stations, but he expressed doubts as to whether they were truly impartial, and warned that they could end up serving merely as government propaganda tools.

Alberto Medina, co-director of news at the private Caracol TV station of Colombia, said there was “a war over information between the public and private sectors.

“I’m not convinced that governments open up their channels to all of the different sectors” and points of view, he said.

“I am a bit sceptical of these public media stations that are supposedly so democratic. I don’t see spaces made available to the opposition on the public stations. They are channels that defend the positions of the government of the day,” he said.

In the midst of this confrontation, the mission of community stations “is to make the fight for freedom of expression a general demand,” María Pía Matta, president of the World Association of Community Radio Broadcasters (AMARC), told IPS.

“We do not want to be turned into agents of the government de jure either,” she said. “I think the debate has to focus more on freedoms in general, and freedom of speech in particular, and on why the State has distanced itself so much from these freedoms.”

In this region, “the State has always been considered a natural predator of freedom of speech, an idea that has taken root,” she added.

The director of the left-leaning private Uruguayan newspaper La República, Federico Fasano, said there were not only two parties to the battle, but three: the state, the media, and society as a whole.

“Information is a public good, a public asset. And although it is subject to private appropriation, because of the way the system is set up, it is important to discourage monopolies and foment pluralism,” he said.

Fasano, who is also director of the AM Libre radio station and the TV Libre television station, said the mere existence of various media outlets with different owners does not necessarily mean there is media pluralism in a country. “If there is only one hegemonic way of thinking, even if they are different media outlets, it is a quasi-monopoly,” he maintained.

The seminar was followed in real time over the Internet, and dozens of people chatted about the content and sent the panellists questions.

Among the issues discussed by the on-line participants was the role played by social networking sites like Twitter in the Arab uprisings and the 15M social protest movement in Spain.

In the seminar, the Salvadoran government’s director of communications, David Rivas, defended measures his country has taken to control information and eliminate programming that, he said, was “psychologically harmful.”

“We removed programmes that previous governments had left in the public media which had a heavy ideological bent, portraying society as a world divided between the wealthy and the ‘bad guys’, denigrating women, and showing things that bordered on criminal behaviour,” he said.

Rivas also insisted that “we have to lose our fear of regulation” of content and of laws “that ensure greater public access to the media.

“There is no absolute right, not even the right to freedom of expression. Those who told us that ‘the best law is no law’ have been deceiving us all along,” he said.

That phrase was cited months ago by the seminar’s keynote speaker, Uruguayan President José Mujica, who spoke out at the time against a proposal to legislate the media in this country, set forth, ironically, by members of his own party.

Mujica did not repeat the phrase in the seminar, but urged the participants to wage a “permanent struggle” for freedom.

“Although the modern, contemporary media are capable of offering us unimaginable resources for communicating, they can also be the most formidable instruments of oppression, of denial of freedom, that mankind has known,” he said.

“This means that the question of how and for what purposes technological progress is used is a central, almost desperate battle,” he added.

Miguel Wiñazki, chief editor of the Clarín newspaper in Argentina, said that because public opinion is “a collective that grants power,” political forces and the media struggle to seduce it.

“Understanding the predominant beliefs, prejudices and ideologies of public opinion, governments as well as political forces and the private media tend to ignore the value of information in and of itself, in order to give public opinion the plot lines it believes,” said Wiñazki.

“The real journalistic work is the day-to-day battle of press workers to make information win out over the news people want,” and over propaganda, he said.