MANKULAM, Oct 14 2011 (IPS) - The one thing that a quarter century of civil war has taught the local population in the north of the island is how to make the best use of local resources – starting with plain sunshine. 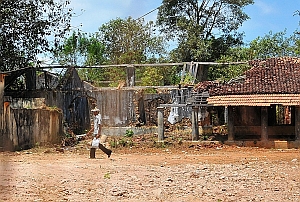 Utilities are yet to be restored after the destruction caused by the civil war. Credit: Amantha Perera/IPS

The people in the Vanni – the scene of the bloodiest battles of the civil war – have gained a reputation as experts in using photovoltaic panels to extract solar energy for lighting and powering appliances that include water pumps.

“They know how to position the solar panels, use the best angles and how to make the best use of them,” Hearth Dissanayake, director at Wisdom Solar, a Sri Lankan company that sells solar energy systems, told IPS.

Dissanayake, who spends much of his time in the Vanni marketing domestic solar panels, added that local advice and skills work better than market research. “The knowledge they have from years of using solar power is unbeatable.”

Regular electricity supply continues to be a rarity in these parts, 30 months after the end of the war. “Even now civilians prefer to generate their own electricity using solar panels since it is more reliable,” Dissanayake said.

Despite the rapid development of infrastructure in the region, most of the over 300,000 war refugees who have returned to the Vanni do not have electricity supply.

Electrification levels in Killinochchi and Mullaittivu, the two districts that make up the bulk of the former conflict zone, are negligible at four percent and one percent respectively. That against when the national electrification average stands at 84 percent.

The power infrastructure was entirely destroyed during the decades of fighting, though there was some attempt to rebuild between 2002 and 2006 when a ceasefire between the government forces and the separatist Liberation Tigers of Tamil Eelam (LTTE) held.

The LTTE, which ran a virtual state within the Vanni, until their defeat in 2009, used small generators extensively as did many of the humanitarian agencies which maintained offices in the Tamil-majority region.

Rupavathi Ketheeswaran, the top government official for the Killinochchi district, said that areas that have seen rapid development, like Killinochchi town and Mankulam, are now fed with electricity from the adjoining Vavuniya and Jaffna districts.

“The electricity grid is still in the process of being constructed,” she said. “It will most likely be completed by early next year. It is only then that it would be possible to provide electricity to the entire district.”

The situation in the Mullaittivu district is worse. It was in that district that the last battles of the civil war were fought, and the destruction manifold compared to other areas of the Vanni.

The wait for electricity supplies in the interior is likely to be a long one. The power lines come to an abrupt halt just a few kilometres out of Killinochchi.

It is in this area of darkness that solar energy thrives as a readily available and trusted alternative.

Dissanayake told IPS that as soon as the war-displaced began returning to the Vanni in early 2010, his company’s outlet in Killinochchi began selling between 300 to 500 domestic units per month.

This despite the units can be costly with a basic model capable of powering three electric bulbs costing 300 dollars.

He said the steep demand was mainly due to the returnees’ concern over security. “The area was infested with snakes and mines,” he said.

Also, those returning to the Vanni were given a grant of 220 dollars each to set up a semi-permanent shelter and, according to Dissanayake, many used part of the money to buy solar panels.

But with such assistance slowing down and incomes not picking up, sales have begun to drop. Wisdom Solar sales have dropped to around 100 to 150 units per month.

Dissanayake believes that more people were likely to go solar if loan facilities are made available.

United Nations agencies like the UN High Commission for Refugees (UNHCR) have also taken to solar panels. The agency has already installed solar- powered street lamps in three locations in the Vadamarachchi area.

“Our assessments show that these returnee families face many difficulties because of lack of lighting,” UNHCR’s country representative Michael Zwack said, announcing the donations of a third lot of solar lights in September.

“Women are afraid to go out at night to use sanitation facilities and children can’t study in the evenings. We hope the solar lamps will go some way in improving this situation,” he said.

The U.N. agency will continue to fund renewable energy sources like solar for street lighting especially in the interior villages of the Vanni which are likely to remain cut off from the national grid for some time to come.

Many returnees are also reluctant to apply for new electric connections because of lingering uncertainties around permanent housing in the post-war situation.

Most live in temporary structures and are looking for clear instructions and guidelines from the government and donors on how and when permanent housing will become available.

Kandan Namanadasan, 60, from the village of Allankulam in the Mullaittivu district, can afford the 150 dollars for a new connection, but this returnee who runs a wayside shop has decided not to apply just yet.

“I am not sure when or where my house will be built, so I will wait,” he told IPS. In the meantime, he is looking for a generator to supplement his solar panels. “I want to get a refrigerator, I am not sure if the panels can support that.”

But, his enterprising neighbour has already rigged up his solar panels to an electric pump that draws water from a deep well that keeps his vegetable patch green.