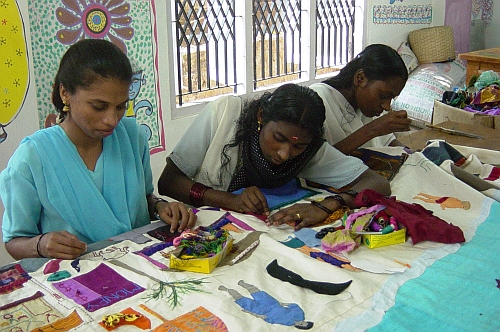 KOVALAM, India, Dec 7 2011 (IPS) - Standing on the shimmering white beach and gazing out at the turquoise blue waters of the Arabian sea, it is hard to believe that a decade ago this international tourist destination was under siege by mounting heaps of garbage.

But Kovalam, about 12 km north of Thiruvananthapuram, capital of southern Kerala state, has been declared a ‘zero waste area’ by a women’s self-help group (SHG) which is engaged in recycling waste into biodegradable carry bags and other items of daily use.

Leena, 35, who heads the SHG – one of several in Kovalam – said she was initially sceptical about the project. “Waste as a resource seemed an impossible concept, but this perception changed once we got going,” she told IPS.

“It is amazing what can be turned out of discarded material such as newspapers, jute, coconut shells and used garments,” Leena said, pointing to an assortment of items scattered about her living room.

With financial assistance from banks, Leena’s SHG started the Pioneer Paper Manufacturing Unit a few years ago with the aim of replacing plastic carry bags with eco-friendly alternatives.

Support also came from the Zero Waste Centre (ZWC), set up in 2001 by ‘Thanal’, an environmental non-government organisation (NGO) which focuses on building capacities and relationships among the local community.

Experts define ‘zero waste’ as a philosophy that encourages extension of the life-cycle of resources. This involves designing and managing products and processes to systematically avoid or reduce the volume and toxicity of waste and conserve and recover all resources rather than burn or bury them.

Even though local government agencies in the area did not cooperate, the group went ahead. “Our group is committed to its goal of making Kovalam into a zero-waste destination,” Sabeena Beevi, manager of the ZWC, told IPS.

“The mindset of the people has been changing. People have begun seeing discarded materials as resources, though this is continuing process,” Beevi said.

As part of its campaign, the SHG has been promoting material substitution, responsible resource use and mindful consumption by imparting training to women.

According to Beevi more than 2,000 women have so far been trained by the ZWC in making various products out of discarded materials.

“Products now being manufactured include items of daily use such as mugs, bowls, spoons, soap dishes, key chains and flower vases which are made out of coconut shells to replace plastic. Many of these items are made at home by the SHG members,” said Beevi.

The gallery at the ZWC contains dozens of products made from natural materials such as coconut, bamboo, banana stems and jute, which speaks of the skill of the women.

As part of the waste-to-wealth strategy, the products are sold door-to-door by the women or by canvassing bulk orders. A co-operative is now being set up to collect finished products from other units and retail them through a centralised operation.

Kovalam has become a model in a state which generates about 3,000 tonnes of waste per day, with only about 50 percent of it collected for disposal, according to government estimates.

Elaborating on the evolution of the ‘Zero Waste Kovalam Campaign’, C. Jayakumar, director of Thanal, told IPS that it all started when the NGO joined other local groups in 1999 to resist a government plan to install a waste incineration plant in the Kovalam tourist village.

Support for the anti-incinerator campaign came from international groups fighting persistent organic pollutants and greenhouse gases produced by incineration. Before long the incinerator project was scrapped.

But the issue of addressing waste remained and Thanal volunteered its expertise to carry out a study to help the authorities solve the problem of disposal, said Jayakumar. “That is what paved the way for devising a zero waste action plan for Kovalam.”

Other interventions saw the making of patchwork items, put together from tailoring waste and scraps of cloth.

As for disposing organic waste, several biogas digesters were set up in Kovalam, which had the added benefit of producing cheap and eco-friendly fuel.

Commenting on the all-women SHG’s activities at Kovalam, Shibu K. Nair, a noted environmental expert, said that zeroing waste at any international tourist centre calls for comprehensive methods to conserve and protect the area for economic and ecological sustainability.

At Kovalam resource recovery yards were established to sort out materials into reusables, recyclables, repairables and waste. Since 2004, the programme has periodically run beach clean-ups to retrieve thousands of discarded plastic bottles.

“This clean-up activity made our programme visible with hundreds of people pitching in to voluntarily pick up discarded bottles and help spread awareness,” says Nair.

“Zero waste is a theory which can be practiced in our daily lives, in every word and deed,” said Nair. “It is a new school of thought in management – both government and business.”

But Nair cautioned that the success of zero waste lies in the close involvement of communities. “It also needs insights from people with a positive attitude,” he said.

Nair, who co-authored a book ‘Waste Management in Rural Tourism Areas – A Zero Waste Approach’, published by the United Nations Development Programme in association with Thanal, believes that vocational training can help immensely in changing community attitudes towards waste.

“Broadly, traditional products and practices which are economically and ecologically sustainable should be identified and revived in these training programmes,” Nair said.