CAIRO, Jan 25 2012 (IPS) - When Egypt’s dictator was ousted during a popular uprising last February, the military leaders who assumed control of the country pledged to “protect the revolution” and ensure a swift transition to civilian rule within six months. One year later, the ruling generals appear to have hijacked the transition to preserve the military institution’s economic autonomy and secure their own political future. 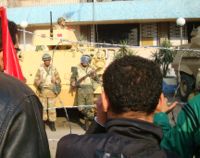 “The military council has never protected the revolution, it has only protected itself,” says activist Ahmed Maher, one of the architects of the uprising that toppled former president Hosni Mubarak.

Egyptians hailed the army for refusing to fire on protesters during the 18-day uprising, but the military’s popularity has plummeted in recent months as public anger mounts over its increasingly repressive rule and the slow pace of change. Many charge that since removing Mubarak, the generals have taken measured steps to preserve the privileges that the military institution has enjoyed since army officers seized power in a coup nearly 60 years ago.

The Supreme Council of the Armed Forces (SCAF), comprised of Mubarak’s former top brass, came under heavy fire when it attempted to draw up a charter that would override the authority of any elected civilian parliament in drafting a new constitution. The proposal was abandoned after fierce opposition from activists and political movements, who rejected the constitutional principles that would enshrine the military’s political power and shield the army’s budget from civilian oversight.

The ruling generals have sizable economic interests at stake, including an estimated 30 percent share of Egypt’s 180 billion dollar economy and an annual 1.5 billion dollar stipend from Washington in return for maintaining peace with Israel. Senior military officers control businesses and tourist resorts, as well as factories producing everything from weapons and vehicles to clothing and bottled water.

“The military controls many economic sectors, and now it controls the government that regulates these sectors,” says Ahmed Sakr Ashour, professor of management at Alexandria University. “You can see why it wouldn’t want to give that up.”

SCAF, led by Mubarak’s long-time defence minister, promised to cede power to an elected civilian government, but keeps finding excuses to prolong its rule. The generals have charted a course for the country’s political transition so meandering and nebulous that many Egyptians find it hard to see the end.

Egypt’s newly elected lower house of parliament convened on Monday, but it could take another month to complete polling for the upper house. The generals only agreed to hasten the complex multi-stage elections after deadly clashes in November raised pressure for a quicker transition. They also pushed forward the presidential poll to June – having previously hinted it might not take place until early 2013.

The military leadership has dragged its feet over dismantling the institutions that supported Mubarak’s repressive state. A court ordered the former ruling party disbanded and many of its former leaders were put on trial, but authorities have shown deference to Mubarak and his inner circle.

Activists contend that courts are lax with police officers accused of killing hundreds of protesters during the uprising, and that changes to the much-hated interior ministry are purely cosmetic. Many senior officers implicated in abuses have yet to be dismissed or held to account.

The soft treatment contrasts with the brutal tactics the military has used on people. Since Mubarak’s ouster, security personnel have used crushing force to break up demonstrations, particularly those critical of military rule.

In September, SCAF renewed and expanded Mubarak-era emergency laws, which give police the right to arrest without cause or warrant. More than 12,000 civilians, including protesters, have been tried unfairly in military courts. Many complain of torture and abuse in military prisons, while some female detainees were subjected to humiliating “virginity tests” while in military custody.

“Egypt’s military rulers have completely failed to live up to their promises to Egyptians to improve human rights and have instead been responsible for a catalogue of abuses which in some cases exceeds the record of Hosni Mubarak,” says rights watchdog Amnesty International.

Activists say the military borrowed a chapter from Mubarak’s playbook, stoking xenophobia to deflect attention from its increasingly authoritarian rule. SCAF leaders have repeatedly blamed an “invisible hand” for inciting violence, including clashes between security forces and protesters that left over 80 people dead and thousands injured during the last three months.

“The invisible hand is the SCAF itself,” says Negad El-Borai , a rights lawyer and activist. “The army beats people, kills protesters in the street, and hasn’t implemented any of the revolution’s demands – and this is the reason for the violence.”

As Egyptians mark the first anniversary of the uprising, many speak of an incomplete revolution. Mubarak is gone, but the generals who replaced him continue to govern the country at the expense of the people. Any true revolution, El-Borai notes, would require making the military accountable to an elected civilian government.