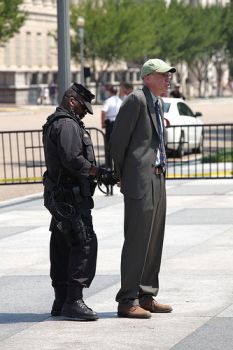 His decision was hailed by environmentalists, who have strongly opposed the seven-billion-dollar project that would transport oil extracted from tar sands in Canada some 2,700 kms to U.S. ports on the Gulf of Mexico, and denounced by Republicans who contend that the project would create tens of thousands of new jobs.

“This isn’t just the right call, it’s the brave call,” said Bill McKibben, the head of 350.org, which successfully mobilised the U.S. environmental community and citizens’ groups against the project last year.

“The knock on Barack Obama from many quarters has been that he’s too conciliatory,” he said. “But here, in the face of a naked political threat from Big Oil to exact ‘huge political consequences,’ he’s stood up strong.”

“President Obama’s decision to reject the Keystone XL crude oil pipeline is as shocking as it is revealing,” declared former Massachusetts Gov. Mitt Romney, the frontrunner in the Republican race for the presidential nomination.

“If Americans want to understand why unemployment in the United States has been stuck above eight percent for the longest stretch since the Great Depression, decisions like this are the place to begin,” he added.

In his announcement, Obama stressed that his administration could take another look at the TransCanada project at a later date, but that the 60-day deadline for him to decide on the project that was attached last month by Congressional Republicans to the Pentagon defence appropriations bill was too soon.

“(T)he rushed and arbitrary deadline insisted on by Congressional Republicans prevented a full assessment of the pipeline’s impact, especially the health and safety of the American people, as well as our environment,” he said in a statement issued by the White House. “This announcement is not a judgment on the merits of the pipeline…”

Briefing reporters, White House spokesman Jay Carney said Obama had spoken with Canadian Prime Minister Stephen Harper, a major booster of the project, earlier in the day. Harper’s office reported that he had expressed “profound disappointment” with Obama’s decision and had told the president that Ottawa will seek to diversify its exports, presumably to reduce its reliance on the U.S. market.

U.S. officials said the administration has made clear it will likely look more favourably on the project if the pipeline is re-routed in order to avoid environmental sensitive areas, notably the Oglalla Aquifer, in the state of Nebraska.

Environmentalists and farmers were concerned that leakage from the pipeline could contaminate the giant aquifer, on which most residents of the plain states of the U.S. Midwest rely for irrigation and drinking water.

“While we are disappointed, TransCanada remains fully committed to the construction of Keystone XL,” said the company’s chief executive officer, Russ Girling, who said the company was working on alternative routes and intended to apply for a new permit which he hoped would be processed on an expedited basis.

Over the past six months, the proposed project has become a major political issue here and one that could affect the outcome of next November’s presidential and Congressional elections.

Backed by the oil industry, Republican lawmakers and candidates have demanded that Obama approve the project, which has been under review since 2008.

They have argued, as Romney did Wednesday, that the project would create “tens of thousands of new jobs” at a time of record unemployment. They have also argued that it would boost national security by reducing U.S. dependence on oil from hostile or unstable countries and regions, such as Venezuela, Nigeria, or the Middle East.

Republicans have long seen the project as a potential “wedge issue”: if Obama approved the project, environmentalists, another core Democratic constituency, would be less fervent in their support for the president in November; on the other hand, if he opposed it, he could alienate sectors of the labour movement.

In November, Obama tried to take the issue out of the election campaign by announcing that the need for further review made it impossible for him to make a final decision on the pipeline until 2013. Republicans then attached an amendment to the 2012 defence appropriations bill that stated the project would be deemed approved if Obama did not reject it within 60 days – which is precisely what the president did.

Like the Republicans, the American Petroleum Institute (API), the main oil industry lobby group, has also made much of the jobs issue in its vigorous advocacy for the project.

“It makes you really question how serious the president is about job creation,” Jack Gerard, API’s president, said Wednesday of Obama’s decision. He called it “a genuflection to extreme elements who somehow believe America will be stronger turning its back on secure supplies of oil the president’s own energy department says will be needed for decades to come.”

But the project’s foes have argued that its job-creation potential has been greatly overstated. The State Department, which is formally handling the permit approval process, has estimated that it would create only 6,500 temporary jobs, while a study by Cornell University’s Global Labor Institute concluded that the project would create no more than 50 permanent jobs once it is completed.

But the main argument against the pipeline by its opponents has been environmental. In addition to the dangers posed by possible leaks or spills, the extraction of oil from tar sands is a particularly dirty form of production that, in addition to destroying boreal forests that lie on top of the soil, emits significantly more climate- changing carbon than other production processes.

According to James Hansen, a prominent climatologist at the National Aeronautics and Space Administration (NASA), fully exploiting the tar sands in Alberta would mean “game over for the climate” given the amount of carbon generated by the refining and burning of the sands.

That warning helped spur a grassroots campaign against the project that mobilised tens of thousands of people in protests around the country, including some 10,000 who showed up at the White House in November on the eve of Obama’s November announcement that he would put off a final decision on the project until 2013.

“This defeat for Big Oil is a huge victory for the health and safety of Americans,” said Erich Pica, president of Friends of the Earth Wednesday after Obama’s latest announcement.

“It belongs to the indigenous communities who first sounded the alarm on the dangers of tar sands extraction, to the Nebraskan farmers and Texan ranchers who withstood TransCanada’s bullying in the name of their land and livelihoods, to the activists from across the country who were arrested on the president’s doorstep, and to all of us fighting for a safe climate and justice-fueled future.”