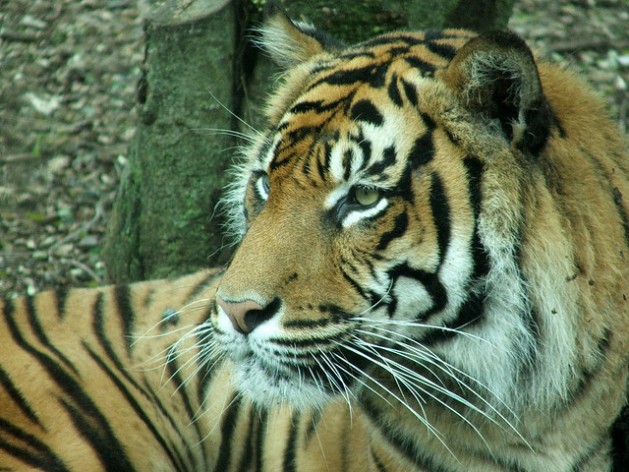 The Sumatran tiger has been classified as critically endangered by the International Union for Conservation of Nature. Credit: Cheetah100/CC BY 2.0

WASHINGTON, Feb 20 2012 (IPS) - The survival of Sumatra’s tigers, elephants, orangutans, rhinos, as well as indigenous communities, is threatened by the “world’s fastest deforestation rate”, caused by none other than the pulp and paper industry, according to the World Wildlife Fund (WWF).

In a recent report, WWF named the Indonesian-based company Asia Pulp & Paper (APP) as “responsible for more forest destruction in Sumatra than any other single company”. APP and competitor Asia Pacific Resources International Limited (APRIL) have consumed the majority of the wood harvested from commercial forest clearances and agriculture conversion.

“In central Sumatra, the impact of APP’s operations on wildlife has been devastating. The company’s forest clearing in Riau Province has been driving Sumatran elephants and tigers toward local extinction,” the report said.

Two of APP’s products identified in the U.S. are Paseo and Livi tissues. APP products are distributed and marketed in North America by a variety of subsidiaries and affiliates including Solaris Paper, Mercury Paper and Papermax.

Despite concerns raised by environmental groups, APP claims to be “committed to being socially, environmentally and economically sustainable throughout its operations”. When Indonesia’s Eyes on the Forest released a report on APP clearing Sumatra’s Senepis Tiger Sanctuary, the company fired back saying the allegations were “clearly false”.

Philip Rundle, CEO of Oasis Brands which market Paseo and Livi, wrote in a letter that their products are “100 percent sustainable… (made from) plantation-grown, rapidly renewable fiber supplied by APP.”

“It’s plainly ridiculous, profoundly untrue to claim that anything APP produces is environmentally sustainable. To me, it borders on false labeling. …There are maps, evidence. It’s incontrovertible that some of the practices APP engages in are not sustainable,” Andrea Johnson, director of forest campaigns for the Environmental Investigation Agency, told IPS.

APP is engaging in a “very strong campaign” to “greenwash” their activities and to assert they are actually doing everything legally, Johnson added. APP’s declarations include asserting that only “degraded” land is being cleared, that only a little of Indonesian land is allocated for mills, and emphasising APP’s donations to environmental foundations.

What APP calls “degraded land” is what WWF calls “tiger habitat,” WWF forest programme manager Linda Kramme told IPS. She believes many of the sustainability statements made by APP and Oasis are misleading. Suggesting APP is only impacting a small amount of Indonesia is like saying the recent Gulf oil spill only impacted a small amount of the U.S., she added.

“[WWF] believes they are mischaracterising their practices happening on the ground. Many U.S. customers and companies don’t have the ability to go to Indonesia and see what’s happening, so it can be easy for them to read materials that APP and companies that market their products like Oasis say – that they have different certification, that they are doing things with conservation. But our teams for two decades have seen impacts on ground and we see and obligation to raise the questions and to raise the facts,” she said.

WWF started engaging APP in 2001 to introduce the company to long-term sustainability practices. However, WWF cut off ties with APP after the company broke its promises to stop using natural forest fiber despite signing a letter of intent.

Legally, bills such as the Lacey Act in the U.S. in principle should create various incentives not to buy illegally logged products, Johnson said. However, greenwashing campaigns and incredibly complicated supply chains make prosecution harder.

“APP has been increasingly using subsidiary companies and resorting to opening mills under other names in countries like U.S. and Canada…It’s not that difficult to start another company and put another name on it and use the same fibre. You see that tactic increasingly being used by companies… I think that structuring on part of the company is very intentional in order to make traceability almost impossible, which obviously makes it difficult to enforce the law,” Johnson said.

In 2010, APP was affected by the U.S. Commerce Department imposing anti-dumping duty orders for certain coated paper imported from Indonesia. “Dumping” is a predatory pricing practice in international trade that allows companies to sell their imported products at very low prices, driving out the competition.

“There is an environmental component to the fact that (APP products are) less expensive. One of the reasons they can afford lower costs is because they are getting fibre illegally (by illegal logging, for example). They are not engaging in the kind of business practices which cost a little bit more if you want to do things legally and that result in lower prices,” Johnson said.

Still, the U.S. can prosecute companies like APP only if the government of the producer country has criminal penalties for the same activity. Therefore, it’s the responsibility of the Indonesian government to effectively implement conservation laws, activists say.

Johnson says a strong case can be made that Indonesia has affectively subsidised the pulp and paper industry by not enforcing its own laws.