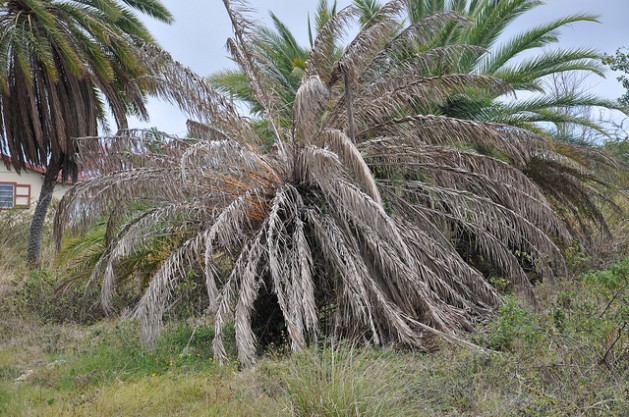 A palm tree killed by a mysterious disease that has been decimating palms in Antigua. Credit: Desmond Brown/IPS

ST. JOHN'S, May 24 2012 (IPS) - Something is decimating the coconut and other palm trees here and no one seems to know exactly what it is.

“In the last couple of months we have been receiving calls from people indicating that their palm trees – some coconut, some ornamental palms – have been dying, and in our investigations we have found a situation that is affecting the crown area of the palm and causing rapid death,” explained Dr. Janil Gore Francis, head of the Plant Protection Unit.

“We have been collecting samples, trying to look at what we are finding to see if there are any insects, if there are any signs of any fungal infestation, trying to determine the exact cause,” she told IPS, “but up to now we have not been able to definitively say what the problem is.

“But we are doing some work in the lab to see if we can isolate anything from the diseased material or from the affected material,” Gore Francis said.

The coconut palm serves a multi-functional role in the Caribbean region, where it is commonly grown.

Small-scale production of products from the tree makes an important contribution to food security. At the industrial level, the coconut industry is an important source of employment and income in rural communities.

The coconut palm also aids in the prevention of coastal erosion while providing charming landscapes that are attractive to both tourists and locals.

While there are no commercial coconut farms in Antigua, coconut trees can be found on many beaches and elsewhere around the country. Some of the trees have survived many storms and hurricanes.

Officials say the coconut may not only help to preserve health, but also boosts Antigua’s economy. Locals bottle and sell the coconut or “jelly” water which they say can flush out kidney stones and lower blood pressure.

But over the past six months, the coconut trees have been falling prey to the mysterious disease, forcing local officials to turn to their regional counterparts for help.

“We are in the process of making arrangements with a regional organisation to get some assistance from outside to come in and help to assess the situation,” Dr. Gore Francis said.

The scourge was first identified in the north of the island and appears to be steadily spreading.

The coconut palm is affected by a number of diseases, some of which are lethal while others gradually reduce the vigour of the palm causing severe loss in yield.

Dr. Gore Francis said that her division is pursuing the hypothesis that the browning and withering of coconut and decorative palm trees in the area stretching from Dickenson Bay to Flagstaff may be caused by an insect.

While this is not the only possibility being investigated, she said that the Plant Protection Unit has extracted the larvae of an as-yet- unidentified insect from infected palm trees in the affected areas and steps are being taken to incubate the larvae to the adult stage, thus allowing for positive identification of the creature.

The agriculture official said this would permit the Plant Protection Unit to reach a positive diagnosis of the infestation and take steps to treat the palms.

She said this campaign will hopefully arrest the spread of the browning, withering plant disease, if not completely eradicate it.

Paul Hoetjes, policy coordinator for nature in the ministry of economic affairs, agriculture and innovation in the Netherlands, told IPS that what is happening to palm trees in Antigua is not unique to the island.

“This sounds very similar to the disease currently killing off coconut palms on St. Eustatius, which is not a mystery disease but a well-known scourge called lethal yellowing disease, widespread in the Americas, Caribbean and Africa,” he said.

“It is caused by a phytoplasma, a bacteria-like organism and spread by an insect, the plant hopper (Myndus crudus). The disease can be prevented or even cured at an early stage by injecting the tree with a tetracycline-type antibiotic, but this is only suitable for ornamental coconut palms, not for trees that produce coconuts for consumption.”

But Dr. Gore Francis said that while palm trees on the island are subject to adverse effects of such common parasites as aphids and whitefly, these “ordinary” pests are nowhere near as virulent as the still unidentified disease.

She noted that aphids and whitefly do cause yellowing and browning of palm fronds. However, these effects are normally observed on mature palm branches. Even when affected by these insects palms will continue to thrive, grow and bear fruit.

The Plant Protection Unit said farmers and homeowners should treat their plants against parasitical insect infestation, but should not worry unduly unless the yellowing, browning and withering is observed on fresh, emerging fronds.

“This phenomenon signals the presence of the deadly, still unknown insect. If left untreated the disease will lead to the eventual death of the affected plants,” it said.

The coconut produces a variety of products which are consumed in the region and internationally. These include fresh green and dry nuts, copra, coconut oil and coconut water among others.

According to the Coconut Industry Market Intelligence Report which was commissioned as part of the CARICOM Regional Transformation Programme for Agriculture, the high price of petroleum-based fuel has brought about a renewed interest in the use of coconut oil for conversion into bio-fuel with the main focus being on the commercial products from the regional industry.