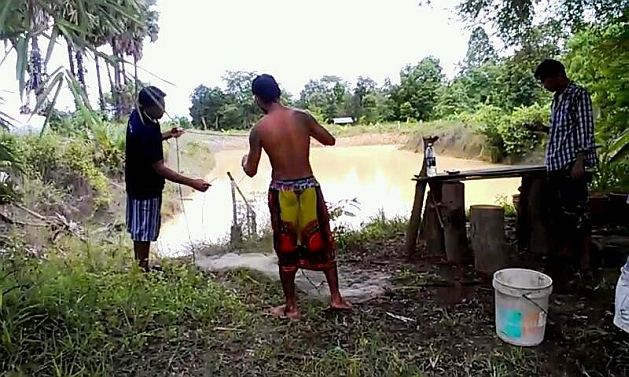 BANGKOK, Jul 10 2012 (IPS) - Small farmers in the Baan Pra village of Thailand’s southern Trang province have been living in anxiety ever since they were slapped with stiff fines by the government in 2006 and ordered to vacate their ancestral lands for ‘contributing to global warming’.

Last month, the villagers, after suffering bankruptcy and loss of land, appealed in an administrative court, pleading against a controversial formula used by the department of national park, wildlife and plant conservation under the environment ministry to compute the fines and evict them.

Baan Pra’s ordeal is not an isolated. Thousands of smallholders with farmlands abutting national forests have been in distress ever since the environment ministry began enforcing the 1992 National Environmental Quality Act five years ago.

According to the Land Reform Network (LRN) that represents community-based farming throughout the country, approximately 2,000 small farmers hae been booked for causing global warming nationwide. LRN is one of five civil society groups assisting the Baan Pra villagers in resisting the draconian policy.

The law prohibits “destruction, loss or damage to natural resources owned by the state” and allows the government to take legal action against those farming in and around national forest areas.

In 2004, the environment ministry announced intention to us a formula to determine economic loss  from global warming caused by forest encroachment and compute the fines.

“Being charged for causing global warming and fined sums of money they never dreamt of owning were a big shock to the villagers,” said Boon Saejung, LRN coordinator in Baantad mountain area which covers four southern provinces including Trang.

According to Boon, farmers in the area have survived for generations on produce from their ancestral lands, long before government proclaimed them as national parks. Most of them own plots no bigger than 15 rais (24,000 sq m). With the new laws being enforced many have been dispossessed of their lands.

Talking to IPS from Trang over telephone, Boon said farmers were not only forced off their land but, in many cases, have watched their crops being cut down by officials claiming they were empowered to do so to preserve national forests.

“Villagers were told to leave their lands, but many decided to stay on simply because they had nowhere to go,” he said.

The ministry’s formula claims to measure environmental damage under several categories such as increase in temperature caused by cutting down trees, loss of soil through erosion, decrease in rainfall etc.

Farmers found guilty of causing global warming are required to pay fines as high as 150,000 baht (approximately 4,839 dollars) per rai (1,600 sq m) per year – an amount of money that far exceeds the annual income of most smallholder farmers.

Prayong Dooklamyai, an LRN advisor in northern Chiangmai province, told IPS that the use of  the ‘global warming damage formula’ has been widespread since 2006 and that many farmers have had their assets seized.

Luea Sumdon, a farmer from northeastern Chayaphum province, told the Isra News Agency of the Thai Journalists’ Association that nine famers in his village have been fined 4,839 dollars each by the ministry for ‘encroachment’ and their crop trees cut down.

Environmental NGOs along with affected farmers have been trying to negotiate the abolishment of the formula since 2007. “The government in its policy statement last year promised to solve the problems regarding global warming cases, but we have not seen any concrete action so far,” Prayong said.

Experts have questioned the formula’s accuracy. Even the man who devised it, Pongsak Wittawarchutikul, a national park department specialist, has admitted that parts of it need to be adjusted and made more accurate.

Last month, the National Human Rights Commission (NHRC) summoned 30 stakeholders in the climate change dispute to testify as part of a process to find a solution to the problem.

Makarapirom, a retired forest department specialist, said there was a need to research the real ecological value of agricultural areas, especially organic plantations and mixed-orchards. It was possible, he said, that the orchards have ecological value and that both production and the ecological balance can be sustained.

For Boon and Prayong from LRN, the global warming dispute reflects the double standards on environmental issues. The way the formula is being applied violates   community rights as defined in the country’s constitution as well as the people’s traditional way of life.

According to the United Nations Framework Convention on Climate Change, in 2000, industry and energy production in Thailand accounted for approximately 75 percent of the country’s greenhouse gas emissions while the agricultural sector was responsible for only 22 percent.

Critics of the formula question why small-scale farmers are being singled out for punishment on environmental damage charges, using the global warming formula.

“Neither small farmers nor their communities are the main contributors to global warming. They are now facing unjust measures and there is a need to find a solution to this,” Boon said.