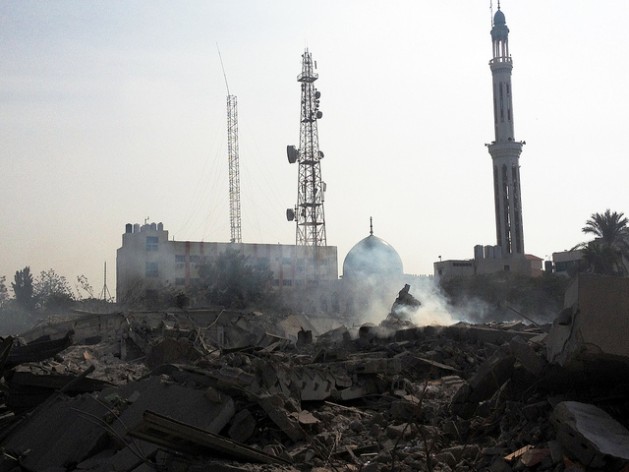 UNITED NATIONS, Nov 28 2012 (IPS) - A long outstanding international conference on a nuclear weapons-free zone in the Middle East, scheduled to take place in Finland next month, has been postponed, giving rise to speculation on whether it will ever get off the ground.

“I have also personally engaged with the states of the region at the highest level to underline the importance of the conference in promoting long-term regional stability, peace and security on the basis of equality,” he said.

But Dr. Rebecca Johnson, director of the Acronym Institute for Disarmament Diplomacy, told IPS it is appalling for the people of the Middle East that militarism is still destroying the lives of civilians.

“If the recent tragic developments have also derailed the important Conference on freeing the Middle East of weapons of mass destruction, it will be important to convene early in 2013,” she said.

Dr. Johnson said the date need not be a deal-breaker – but this delay makes it even more important now to start a determined and constructive process to eliminate nuclear and other weapons of mass destruction (WMD) from the region.

“If the meeting cannot launch an effective process early in 2013, there will be serious consequences not only for the region but for the credibility of the nuclear Non-Proliferation Treaty (NPT), demonstrating yet another failure to deliver on its essential agreements,” she warned.

The proposal for the meeting was endorsed by 189 member states at the Review Conference on the NPT held at the United Nations in May 2010.

The Israeli government, while criticising the outcome document of that Review Conference, left the door open for participation in the proposed conference.

But the political uprisings in the Arab world, including the ouster of the Israeli-friendly Egyptian President Hosni Mubarak, have triggered expressions of Israeli concern – specifically its own security in an increasingly hostile environment.

In a statement released Monday, the secretary-general said he reaffirms his “firm resolve and commitment, together with the Russian Federation, the United Kingdom and the United States, in consultation with the states of the region, to convene a conference to be attended by all states of the Middle East.”

The focus, he said, will be on the establishment of a Middle East zone free of nuclear weapons and all other weapons of mass destruction, on the basis of arrangements freely arrived at by the states of the region.

Hillel Schenker, co-editor of the Palestine-Israel Journal, told IPS that while it’s unfortunate the Helsinki conference will not be convened in 2012, the fact that Ban Ki-moon and the co-conveners, the U.S., UK and Russia, remain committed to the process is very encouraging.

It’s understandable, given the circumstances, he said, that it was difficult to convene the conference in December 2012.

However, the recent statement by the secretary-general expressing hope that the Finnish facilitator will be able “to conduct multilateral consultations in the shortest possible time which will allow the conference to be convened in the earliest possible time in 2013”, means that this valuable process will continue.

“For the conference to succeed, it is crucial that both Iran and Israel be at the table,” Schenker noted. “Hopefully the facilitator, perhaps with the aid of the Americans, will be able to convince the Israeli government of the importance of engaging in this process.”

Still, he said, the Helsinki Conference remains an historic opportunity to move forward on a parallel track, towards the creation of a regional security regime which will contain a Nuclear and WMD-Free Zone and towards Israeli-Palestinian and Israeli-Arab comprehensive peace.

Meanwhile, the United States which traditionally throws a protective arm around Israel, has already laid down a condition in advance of the pre-conference preparations.

In July 2010, when Israeli President Benjamin Netanyahu met with U.S. President Barack Obama, he was assured the Middle East conference would not single out Israel.

A White House statement also insisted the conference would only take place “if all countries feel confident they can attend, and that any efforts to single out Israel will make the prospects of convening such a conference unlikely.”

Speaking at a symposium on “Faith, Dialogue and Integration” at the United Nations Monday, Jonathan Granoff, president of the Global Security Institute, said nuclear weapons represent a form of security apartheid.

Like apartheid, both sides are injured. And those threatened reasonably feel the terror of destruction, he added, pointing out that those threatening have their moral foundations corroded or live in denial of what they are doing.

“The continued reliance on these horrific devices provides the modern world with its most severe and divisive irony,” he said.

The means of pursuing security are serving to breed insecurity. And the inequity inherent in the system pulls at the fabric of human unity, he added.

As Vartan Gregorian of the Carnegie Corporation recently pointed out, “All declared nuclear powers – the U.S., Russia, Great Britain, France, and China and now India and Pakistan (Israel as an undeclared nuclear power) – insist they possess nuclear weapons only to deter others from using them.”

Yet there have been many times in the past, and there will surely be times in the future, when major powers have used their nuclear capability to gain some political end by intimidation, he said.

Intimidation through the threat of annihilation of millions of innocent people is unjustified legally, morally, and remains the greatest threat to the stimulation of the proliferation of weapons, said Granoff. Thus, continued threat to use these weapons is impractical.

“One must therefore wonder if the irrational pride of power informs the policies of those who seek to perpetuate and ‘improve’ their arsenals of devastation,” he said.