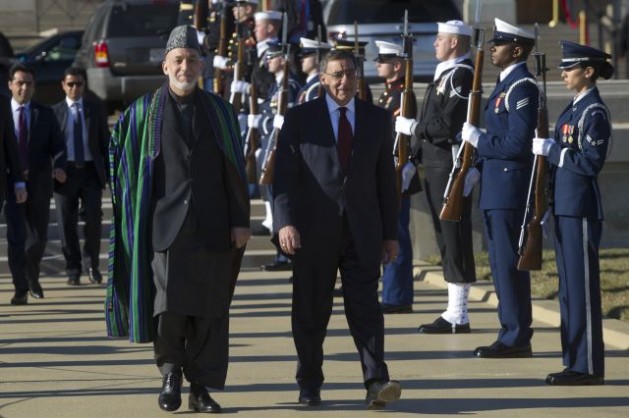 WASHINGTON, Jan 12 2013 (IPS) - President Barack Obama announced Friday that U.S. forces will accelerate the transfer of primary security responsibilities to their Afghan counterparts and take on an exclusively support and training role beginning this spring.

The announcement, which came after several days of meetings between visiting Afghan President Hamid Karzai and top U.S. officials here, suggested that Washington may draw down its remaining 66,000-troop force in Afghanistan more quickly than previously planned.

But he also stressed that the pace of such a drawdown will be decided after more consultation with his field commanders over the coming months.

“Starting this spring, our troops will have a different mission: training, advising and assisting Afghan forces,” he said in a joint White House press conference with Karzai. “It will be a historic moment.”

Obama also implicitly admitted that the more-ambitious “national-building” counter-insurgency (COIN) strategy that he had advocated four years ago in hopes of improving governance and spurring economic development had fallen short.

“(H)ave we achieved everything that some might have imagined us achieving in the best of scenarios?” he asked. “Probably not. This is a human enterprise, and you fall short of the ideal.”

But he insisted that Washington had achieved “our central goal” which he defined as shaping a “strong relationship with a responsible Afghan government that is willing to cooperate with us to make sure that it is not a launching pad for future attacks against the United States.”

He also stressed that Washington supports a reconciliation process between the Karzai government and the Taliban insurgency and the long-delayed opening of a Taliban office in Qatar to facilitate it.

While he insisted that such a process must be “Afghan led”, he also said Washington believed reconciliation would not be possible “without the Taliban renouncing terrorism” and recognising the existing constitution, including those provisions that protect the rights of women.

In meetings with representatives of the Karzai government in France last month, the Taliban delegates stressed that they were prepared to make compromises, including permitting, for example, girls and women to attend school, albeit in “an Islamic way.”

Analysts here and in the region, however, have said the movement remains deeply split between hard-line and more moderate factions.

While Obama’s remarks left many key questions unanswered – notably how many, if any, and under what conditions U.S. forces may remain in Afghanistan after the 2014 deadline for the withdrawal of all NATO combat forces – they made clear that his main focus was to prevent Al-Qaeda and its affiliates from regaining a safe haven in the country from which they had launched the 9/11 attacks on New York and the Pentagon.

In that respect, he further signalled his adoption of a so-called counter-terrorist (CT) strategy that had been urged on him most forcefully by Vice President Joe Biden four years ago.

At the time, however, Biden lost the argument to more hawkish officials, notably Pentagon chief Robert Gates, CentCom commander Gen. David Petraeus, and Secretary of State Hillary Clinton who advocated a COIN strategy which resulted in the tripling of the number of U.S. troops deployed to Afghanistan over the following two years to a total of about 100,000.

They, in turn, were supplemented by another 35,000 troops, drawn primarily from Washington’s NATO allies.

While the strategy worked in some respects – U.S. forces successfully evicted the Taliban from some regions in the south and east where the group’s presence had been pervasive – the Karzai government’s legendary corruption and its failure to effectively address the needs of the affected populations worked against success.

As the civilian-led part of the strategy lagged, commanders relied increasingly on its military aspects, including drone strikes and the hated “night raids” aimed at capturing or killing mid-level Taliban officials. These tactics increasingly alienated the population they were supposed to protect and forced Karzai himself to publicly denounce Washington’s conduct of the war.

Meanwhile, a war-weary public back home – like public opinion in the NATO allies – turned increasingly against the war, with growing majorities here calling for withdrawal “as soon as possible”. At the end of November, 62 senators, including more than a dozen Republicans, voted for a “sense of Congress” resolution calling for an “accelerated transition of United States combat and military and security operations to the Government of Afghanistan.”

Karzai’s occasional anti-U.S. outbursts, as well as the growing number of fatal “green-on-blue” attacks by Afghan forces against their U.S. and NATO counterparts over the past 18 months, further soured the public on a war that has lasted longer than any other in U.S. history, cost an estimated 1.3 trillion dollars, and so far taken more the lives of nearly 2,200 U.S. military personnel.

With Gates and Petraeus now departed and Clinton on the way out, Obama appears to be surrounding himself with people who are much more closely aligned with Biden’s thinking. His nominees for secretaries of state and defence, Sen. John Kerry, and former Sen. Chuck Hagel, respectively, are both highly-decorated Vietnam veterans highly sceptical of COIN strategy.

Still, the results of this week’s meetings with Karzai are likely to provoke a lot of criticism, especially from neo-conservatives and other hawks, primarily in the Republican Party.

They will undoubtedly point out that, while the Afghan Army already has the lead in securing 80 percent of the country’s population, only one of the Army’s 23 brigades, according to a Pentagon report released last month, is able to operate independently without air or other military, including combat support from the U.S. or its NATO allies.

The Army also depends heavily on allied intelligence and logistical support. That reliance is not likely to change substantially when the Army takes the lead in securing all of Afghanistan by the end-of-spring deadline set out by Obama.

As noted by Obama himself, the Army’s leadership “doesn’t mean that coalition forces, including U.S. forces, are no longer fighting. They will still be fighting alongside Afghan troops,” he said.

But the bigger question is how quickly Obama intends to draw down the remaining U.S. forces, and he stressed that will depend in part on the advice he gets from his military commanders led by Gen. John Allen.

They reportedly want to maintain as many troops in the field as possible through at least the next fighting season, which will end next fall, but Biden and others are pressing for a faster drawdown.

The other big question is how many troops Washington hopes to keep in Afghanistan after 2014. Allen has publicly said he needs a force of at least 6,000 and as many as 20,000 to carry out counter-terrorist operations and provide adequate support and training to the Afghan Army. But the White House in recent days has suggested that 3,000 may be sufficient.

In advance of Karzai’s visit this week, two senior White House officials told reporters that Washington was prepared to accept fewer yet or even none at all if Kabul did not sign a Status of Forces Agreement (SOFA) that would provide U.S. military personnel legal immunity from prosecution for any actions they carry out in Afghanistan – a demand Obama reiterated Friday.

Karzai appeared to accept that condition, noting that he intended to “argue for immunity for U.S. troops in Afghanistan in a way that Afghan sovereignty will not be compromised…” when he returned to Kabul.