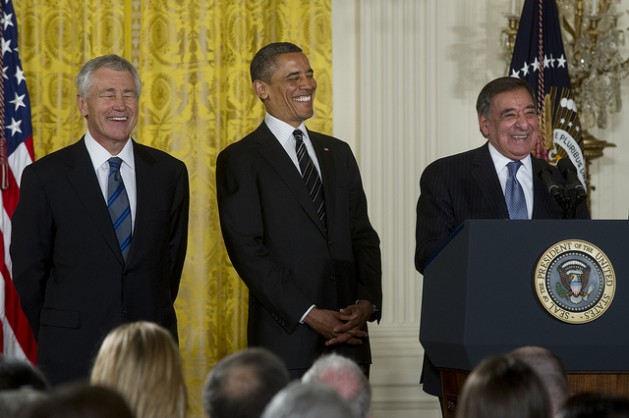 The more-controversial Hagel will likely face opposition in his confirmation hearings, especially from Republican senators whose policy views hew closely to those of the neo-conservatives and other right-wing hawks, although a handful of staunchly pro-Israel Democrats have also expressed concern.

But most analysts believe Hagel, who was twice wounded as a rifleman in the Vietnam War and served two terms as a senator from Nebraska (1997-2009), will likely garner a solid majority of his former colleagues after the hearings, which will almost certainly centre on his views on Israel, Iran, Afghanistan and possible cuts to the Pentagon’s more than 600-billion-dollar annual budget.

Shortly after his nomination was formally announced, both Robert Gates, who served as secretary of defence under both George W. Bush and Obama, and former Chairman of the Joint Chiefs of Staff Colin Powell, who also served as Bush’s first secretary of state, issued strong endorsements of Hagel.

Brennan, a former top CIA analyst who withdrew from consideration for the agency’s top post four years ago amidst allegations of complicity – which he denied – with the Bush administration’s “enhanced interrogation” techniques against suspected terrorists, is expected to have an easier confirmation.
Brennan is chiefly known for his strong advocacy and escalation under Obama of drone strikes against “high-value” terrorist suspects in Pakistan, Yemen, and Somalia. He will likely encounter questioning, especially from some Democrats, regarding the effectiveness of such “targeted killings” and the criteria used in carrying them out, as well as his own role in “enhanced interrogation” which human rights consistently denounced as torture.

“The Senate should not move forward with his nomination until all senators can assess the role of the CIA – and any role by Brennan himself – in torture, abuse, secret prisons, and extraordinary rendition during his past tenure at the CIA, as well as can review the legal authorities for the targeted killing programme that he has overseen in his current position,” said Laura Murphy, head of the Washington office of the American Civil Liberties Union (ACLU).

The two nominations announced Monday, along with that of Sen. John Kerry as secretary of state two weeks ago, suggest the new team will share a fairly coherent outlook.

Its main features include scepticism about counter-insurgency (COIN) or “nation-building” strategies; a determination to lighten Washington’s military “footprint” in the Middle East even as it pursues aggressive counter-terrorist tactics; and a conviction that, as Gates put it last year, “any future defence secretary who advises the president to again send a big American land army into Asia or into the Middle East or Africa should have his head examined…”

Both Kerry, who tends to the liberal internationalist side of the spectrum, and Hagel, a Republican realist in the mode of former national security adviser Brent Scowcroft, were deeply affected by their experience in Vietnam.

When Hagel’s name first leaked as a leading contender to head the Pentagon, hard-line neo-conservatives – who combine a strong belief in the efficacy of military might with a worldview close to that of Israel’s right-wing Likud Party – launched a major campaign designed to pre-empt his nomination, presumably by persuading Obama that a confirmation battle would be too politically costly to be worth waging.

The actual evidence they have been able to muster in support of these charges has been meagre, at best. The charge of anti-Semitism, for example, rests virtually exclusively on his reference during one 2008 interview for a book project in which he noted that the “Jewish Lobby intimidates a lot of people” in Congress and his insistence at the time that he was not “the senator from Israel”.

And while he has not hesitated to publicly criticise the Israeli government for pursuing actions, such as expanding Jewish settlements on Palestinian lands, that, in his view, have harmed Washington’s strategic interests in the broader Middle East, he always supported U.S. military aid to the Jewish State.

On Iran, Hagel, like Obama himself, has stressed the importance of diplomatic engagement and voiced scepticism about the wisdom of military action against Tehran’s nuclear programme, although he has never rejected it out of hand either.

The neo-conservatives were clearly hoping to generate sufficient opposition both from the much broader Israel Lobby – which includes Christian Zionists, as well as some major national Jewish organisations – and in Congress, especially among Republicans, to persuade Obama to drop the idea.

On the eve of the nomination, Rubin said picking Hagel was “so outrageous that it becomes an easy no vote for all Republicans”.

Some Republicans have indeed rallied to their call. “This is an in-your-face nomination of the president to all of us who are supportive of Israel,” declared Sen. Lindsay Graham, who has long favoured attacking Iran, on a widely-watched news programme Sunday. Altogether, about half a dozen Republican senators have said they will oppose the nomination.

But others have taken a more cautious approach, in part due to a major backlash against the neo-conservative campaign from pillars of the Republican and foreign policy establishments.

While Gates and Powell spoke up Monday, a series of open letters from Scowcroft, Zbigniew Brzezinski, Ronald Reagan’s former Defence Secretary Frank Carlucci, several former chiefs of the U.S. Central Command, and a number of top-ranking retired diplomats including five former ambassadors to Israel, and Washington’s recent ambassador to Iraq and Afghanistan, Ryan Crocker, have urged Hagel’s nomination and denounced the campaign against him.

Thus, several key Republican senators – among them John McCain and Minority Leader Mitch McConnell – have voiced concerns about Hagel’s records but stressed they will give him a fair hearing. In 2007, McConnell called Hagel “one of the (country’s) premier foreign policy voices.”

Most leaders of the Israel lobby appear to be taking a similar view – expressing concern while insisting they will keep an open mind. The head of the Anti-Defamation League, Abraham Foxman, strongly criticised Hagel’s consideration at first but then went silent.

“Sen. Hagel would not have been my first choice, but I respect the president’s prerogative,” he said Monday.

The lobby’s leading institution, the American Israel Public Affairs Committee (AIPAC), is also considered likely to stay on the sidelines rather than oppose the nomination, according to both Peter Beinart, who runs the influential “Open Zion” blog on the Daily Beast website, and the more conservative Jeffrey Goldberg, a Jewish blogger with the Atlantic.

“It’s much easier for AIPAC to rally members of Congress behind resolutions that limit the Obama administration’s room to maneuver on actual policy questions, where opposing the president doesn’t look like such a direct slap in the face,” Beinart wrote Monday.

As for Democrats, a few have voiced similar concerns to those of McCain and McConnell, but none has come out in opposition. Significantly both Majority Leader Harry Reid and Sen. Carl Levin, the Jewish chairman of the Armed Services Committee that will hold the confirmation hearings, endorsed Hagel Monday.