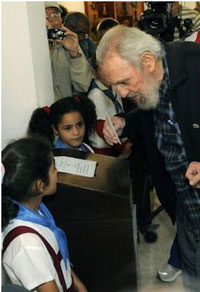 “Nothing is fortuitous: Fidel is (showing) his support for updating the economic model and the transformations that derive from it,” an analyst who asked not to be identified told IPS. Castro cast his ballot and talked to Cuban media Sunday at his polling station in the municipality of Plaza de la Revolución (Revolution Square) in the capital, Havana.

According to the electoral laws, the new National Assembly must meet within 45 days of the elections and designate the 31 members of the Council of State, including its president, for a five-year term. Raúl Castro’s re-election is taken for granted.