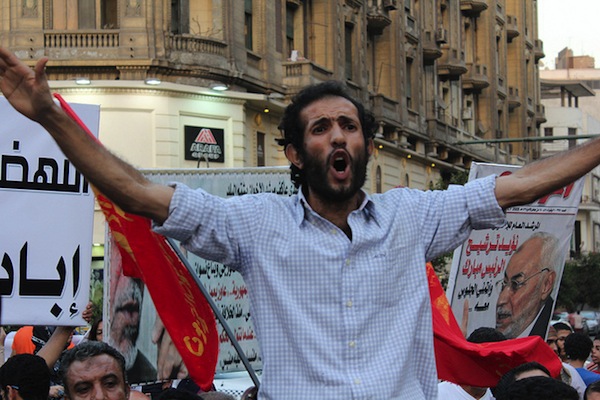 An anti-Morsi protest in August 2012, almost a year before the former president's ouster. Credit: Gigi Ibrahim/CC by 2.0

CAIRO, Jul 21 2013 (IPS) - The events of Jun. 30 have split Egyptians into two categories. For those in the first, what happened that day was an army-supported public uprising to fulfill the objectives of the revolution of Jan. 25, 2011 and topple a president who broke promises and worked only to benefit his own group, the Muslim Brotherhood.

The second category sees the events as a military coup planned in advance, a crisis orchestrated by army leaders and Egyptian intelligence to provoke citizens’ wrath against a democratically elected president and give them reason to oust him and seize power.

As the situation continues to unfold in Egypt, the events of that day have become even more divisive as protests supporting or decrying varying sides take place throughout the streets of Cairo and analysts and experts offer a variety of explanations for Morsi’s ouster.

According to Muhamed Omara, a member of the Salafist Nour Party and Egypt’s Constituent Assembly, the Egyptian opposition has long called for democracy, and so whomever Egyptians elected as their leader should be respected and given the chance to lead.

The behaviour of the liberal opposition toward the military coup was completely disgraceful, according to Omara, and ousting the legal president, Mohamed Morsi, could not be defined as democratic, he added.

Omara, who is also a professor at Egypt’s Al-Azhar University, believed that the liberal opposition refused to accept Morsi’s initiatives to cooperate in building a new Egyptian state and instead described him as a non-democratic president, even as they saw their alliance with the army to oust him as a democratic move.

Hisham al-Husseiny, a pro-Morsi business man, believes that what happened on Jun. 30 was premeditated and that the leaders of the armed forces had long been waiting for an opportunity for a coup against Morsi.

Army leaders and Egyptian intelligence masterminded the crises in fuel, electricity and traffic and created a deficit to incite people to protest and demand Morsi’s departure, Al-Husseiny believed.

Meanwhile, although people were angry, Morsi made decisions against his own interests, and so people lost sympathy for him , al-Husseiny said. He expected that the Muslim Brotherhood would not participate in the political arena again soon until it received a guarantee that election results would be implemented and protected.

Mohamed Abu Hamed, the former vice chairman of the Free Egyptians Party, which was founded after the 2011 revolution and supports a liberal, democratic and secular political order in post-Mubarak Egypt, said Morsi ignored public sentiment when Egyptians called for early elections, so the Brotherhood president had to be overthrown by force.

Abu Hamed told IPS that Morsi began losing legitimacy when he issued a constitutional declaration to expand his authority, mistakenly thinking that such a move would shield him from criticism from the opposition and prevent the legal repealing of his decrees.

On Nov. 22, 2012, Morsi announced that the president was authorised to take any measures he saw fit in order to preserve and safeguard the revolution, national unity or national security. According to the decree, all constitutional declarations, laws and decrees made since Morsi assumed power could not be appealed or cancelled by any individual or political or governmental body until the ratification of a new constitution and the election of a new parliament.

Abu Hamed, a former member of the post-revolutionary People’s Assembly said that the president’s actions left the public and the military with little choice. After millions took to the streets, the army had to support the people, he added.

Rather, democracy is the promises and pledges made by the nominated candidate to voters, he said. If these promises are not carried out in the agreed amount of time, voters have the right to withdraw the candidate in a revolutionary form of democracy.

What happened on Jun. 30 was a real revolution, supported by the army, where millions demanded the departure of Morsi and his group, Zidan maintained. It was not a military coup but democracy in its loftiest sense where the army listened to people and established a revolutionary democracy, without gaining for itself, he insisted.