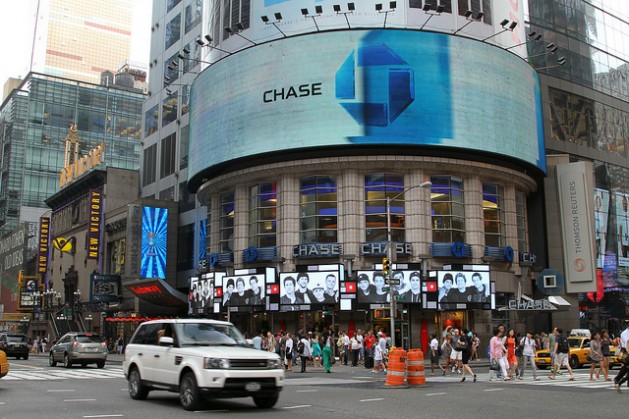 Chase handles most of the accounts and money transfers of the United Nations and its agencies, running into billions of dollars. Credit: Jim the Photographer/cc by 2.0

In some residential buildings, he said, there were covert signs conveying an unfriendly message: “Pets and diplomats not welcome.”

It is bad enough for U.N. diplomats to be lumped together in the company of dogs and cats in the city’s high-rise buildings, he bluntly told delegates, but now “the banking sector is treating us as criminals.”

At a meeting of the 132-member G77, the largest single coalition of developing countries, speaker after speaker lambasted banks in the city for selectively cutting off the banking system from the diplomatic community, describing the action as “outrageous”.

Their anger was directed mostly at JP Morgan Chase (formerly Chemical bank) which was once considered part of the U.N. family – and a preferred bank by most diplomats – and at one time housed in the secretariat building.

The Group of 77 developing countries is currently in the process of drafting a resolution, which will eventually go before the 193-member General Assembly, condemning the actions of the banks and asking the secretary-general to intervene.

The draft, which is expected to undergo changes at the next G77 meeting, will request the secretary-general to review and report to the General Assembly, within the next 120 days following the adoption of the resolution.

The G77 wants to specifically single out "any obstacles or impediments" observed in the accounts opened by the Permanent Missions of Member States or their staff, and the impact these impediments have on the adequate functioning of their offices.

The draft resolution also requests the secretary-general to submit to the General Assembly, a set of recommendations and a proposal oriented to reviewing the U.N. Secretariat's financial relation with banks, specifically JP Morgan Chase, and considering alternatives to such financial institutions.

The resolution further requests the secretary-general, to provide member states with alternative options regarding banking services in New York City, to allow them to adequately manage and maintain their accounts, assessed budgetary contributions, voluntary contributions, transfers and other financial activities directly related to their membership to the United Nations, and their Permanent Missions.

The G77 is asking the secretary-general to hold "proper negotiations on this matter in his capacity as U.N. chief administration officer, including with the host country, that all Permanent Missions and their staff will be granted an equal, fair, and non-discriminatory treatment from the referred institutions when conducting their respective accounts."

Additionally, it requests the host country, the United States, to take the necessary measures to ensure that personal data and information of persons affected by closure of accounts is kept confidential by the banks, and to report on those measures to the Secretary General within two to three months after the adoption of this resolution by the General Assembly.

When the dispute first erupted in 2011, the U.S. Mission to the United Nations sent a letter sent to all member states in which it said that JP Morgan Chase is a private sector bank and its decisions are made for 'business reasons alone'.

"The government of the United States has no authority to force banks to continue to serve their customers or to open or close any accounts," it said.

Chase also handles most of the accounts and money transfers of the United Nations and its agencies, running into billions of dollars.

The U.S. treasury apparently has informed all banks that every single transaction of some 70 “blacklisted” U.N. diplomatic missions, and even individual diplomats, be meticulously reported back to Washington (perhaps as part of a monitoring system to prevent money laundering and terrorism financing).

The banks have responded that such an elaborate exercise is administratively expensive and cumbersome. So as a convenient alternative, they have closed down, or are in the process of closing down, all accounts, shutting out the diplomatic community in New York.

As one diplomat warned, if this situation continues, “we may have to request cash in diplomatic pouches from our home countries, and bank our money under mattresses.”

There are reports that some diplomatic missions want to pay their annual dues to the United Nations in hard cash, while others, citing “diplomatic reciprocity”, want the Secretariat to retaliate by closing its own accounts with these banks.

Ian Williams, a longstanding U.N. correspondent and senior analyst at Foreign Policy in Focus, wonders why banks should even bother monitoring U.N. missions and diplomats when the U.S National Security Agency (NSA) can perhaps do a better job.

The NSA, which has already been accused of tapping telephones and monitoring the movements of diplomats, could probably provide details of all bank transactions entered electronically, he said, because they are known to have the capacity to do so.

“Unless you can find a bank that uses paper ledgers and an abacus,” Williams told IPS, with tongue firmly entrenched in his cheek.

When the United Nations decided to locate its secretariat in the city of New York, the United States signed a ‘headquarters agreement’ back in 1947 not only ensuring diplomatic immunity to foreign diplomats but also pledging to facilitate the day-to-day activities of member states without any hindrance.

Williams said the United States has never been enthusiastic at accommodating itself to international law, as was proven when the General Assembly temporarily relocated to Geneva because Washington refused a visa for Palestinian leader Yassir Arafat to visit New York in December 1988.

In his address to the General Assembly session in Geneva, perhaps the only one of its kind, Arafat took a swipe at Washington when he prefaced his statement by saying “it never occurred to me that my second meeting with this honourable Assembly, since 1974, would take place in the hospitable city of Geneva”.

The story about the new dispute between the diplomatic community and the banks surfaced in the Inner City Press blog last week.

But IPS ran a detailed story titled Banks Blacklist U.N. Missions back in January 2011, when financial institutions first imposed this rule on some U.N. missions, but not on diplomats.

At the G77 meeting, the most vocal country was China, a veto-wielding permanent member of the Security Council, which complained that its bank accounts were closed in 2011.

The problem was not the closed accounts per se, said a Chinese delegate, “but more serious was the issue that some countries were targeted, mostly developing countries.”

An Asian diplomat told IPS that to the best of his knowledge, the bank accounts of most, or all, Western missions were left untouched.

“Why this double standard?” he asked.

Ambassador Palitha Kohona, Sri Lanka’s permanent representative to the United Nations, told IPS there has been a suggestion that the U.N. Secretariat wield its considerable commercial clout by ceasing to deal with banks which have closed the accounts of certain diplomatic missions and diplomats attached to such missions

“The U.N.’s transactions amount to many billions of dollars per year,” he noted. “If the diplomats of member states and their missions are not welcome at these banks, why should the United Nations, which is an organisation of the same member states, continue to deal with them?”

Williams said there is an underlying principle of ‘do as we say, not do as we do’.

Presumably, under the Vienna Conventions, diplomatic bank accounts should have similar protections as other diplomatic communications, but the banks would need assurances from the U.S. authorities to exempt them from the Orwellian scrutiny they subject everybody else to, he added.

“So the missions will now be forced to send cash – tending to suspicions of money laundering. Indeed, we know some missions have done just that, but U.S. insularity now gives them an excuse for their behavior,” said Williams, U.N. correspondent for the Tribune and author of “U.N. for Beginners”.

Asked for an official response, U.N.’s Deputy Spokesperson Farhan Haq told IPS the secretary-general shares the concerns of the Group of 77, and the U.N. has taken up the issue with the host country and Chase.

“The Secretariat has also initiated discussions with other financial institutions to assist with finding alternative banking arrangements for the affected missions and their staff,” he added.