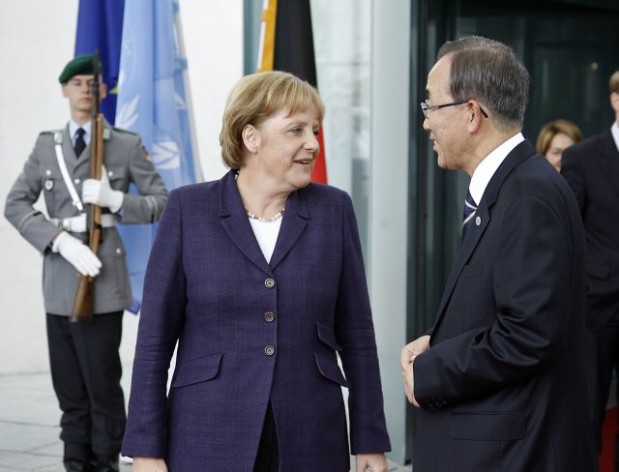 The electronic surveillance of German Chancellor Angela Merkel (left, pictured with U.N. Secretary-General Ban Ki-moon) reportedly goes back to 2002, even before she was elected to office. Credit: UN Photo/Mark Garten

UNITED NATIONS, Oct 28 2013 (IPS) - When the 193-member General Assembly adopts a resolution next month censuring the illegal electronic surveillance of governments and world leaders by the U.S. National Security Agency (NSA), the U.N.’s highest policy-making body will spare the United States from public condemnation despite its culpability in widespread wiretapping.

A draft resolution currently in limited circulation – a copy of which was obtained by IPS – criticises “the conduct of extra-territorial surveillance” and the “interception of communications in foreign jurisdictions”.

But it refuses to single out the NSA or the United States, which stands accused of spying on foreign governments, including political leaders in Germany, France, Brazil, Spain and Mexico, among some 30 others.

The draft says that while the gathering and protection of certain sensitive information may be justified on grounds of national security and criminal activity, member states must still ensure full compliance with international human rights.

The resolution will also emphasise “that illegal surveillance of private communications and the indiscriminate interception of personal data of citizens constitutes a highly intrusive act that violates the rights to freedom of expression and privacy, and threatens the foundations of a democratic society.”

Additionally, it will call for the establishment of independent oversight mechanisms capable of ensuring transparency and accountability of state surveillance of communications.

And the resolution will request the U.N. High Commissioner for Human Rights, Navi PIllay, to present an interim report on the issue of human rights and “indiscriminate surveillance, including on extra-territorial surveillance.”

This report is to be presented to the 69th session of the General Assembly next September, and a final report to its 70th session in 2015.

Chakravarthi Raghavan, a veteran Indian journalist who has been reporting on the U.N. and its activities since the 1960s, both in New York and later in Geneva, told IPS the resolution may help start a process under which the national security interests of every state, international security and right to privacy and human rights of people can be discussed and a balance found in some universal forum.

“Otherwise, the U.N. world order will break down, and no one will benefit or emerge unscathed,” he said.

Much will depend on the follow-up action that the General Assembly resolution calls for, and with what tenacity members pursue it.

“Frankly, I am not at all clear that some of the nations raising the issue now are really serious,” said Raghavan, editor-emeritus of the Geneva-based South-North Development Monitor SUNS. “If they were, any one of them in Europe would have granted asylum to Edward Snowden, and not play footsie with U.S. in its attempts to have him jailed in the U.S. on espionage charges.”

The revelations of U.S. spying have come mostly from documents released by Snowden, a former NSA contractor, who sought political asylum in Russia after he was accused of espionage by the United States.

One Third World diplomat, speaking on condition of anonymity, told IPS the draft could undergo changes by the time it reaches the General Assembly mid-November.

But he held out little hope the final resolution will specifically castigate the United States because of the political clout it wields at the United Nations, and Washington’s notoriety for exerting diplomatic pressure on its allies and aid recipients.

Besides which, he said, everybody plays the spying game, including the French, the Germans, the Chinese and the Russians — and therefore none of them can afford to take a “holier than thou” attitude.

Still, as the New York Times put it last week, “One thing is clear: the NSA’s Cold War-era argument, that everyone does it, seems unlikely to win the day.”

The co-sponsors of the resolution are Germany and Brazil, whose political leaders have already condemned the United States for electronically breaking into their communications networks. According to published reports Monday, the electronic surveillance of German Chancellor Angela Merkel goes back to 2002, even before she was elected to office.

The German magazine Der Spiegel said over the weekend that NSA spying in Germany originated in the U.S. embassy in Berlin.

There has been a longstanding tradition that the “Five Eyes” do not spy on each other, the five being the United States, Britain, Canada, Australia and New Zealand. But the surveillance of European political leaders has triggered a strong rejoinder from the 28-member European Union (EU).

Raghavan told IPS that even if other countries are not publicly feuding with the U.S. over this — and perhaps their own security apparatuses are secretly collaborating in this global “surveillance state” — the NSA activities at a minimum raise several systemic issues involving basic violations.

These include violations of the U.N. Charter; “unauthorised” and blatantly illegal invasions and/or intrusions into national space; World Trade Organisation (WTO) agreements, in particular the Trade-Related Intellectual Property Rights (TRIPS) Agreement and the General Agreement on Trade in Services (GATS); the International Telecommunication Union Treaty and Conventions; treaties and protocols of the World Intellectual Property Organisation (WIPO); the Universal Human Rights Declaration and conventions; and the Vienna diplomatic conventions and codes of behaviour among civilised nations.