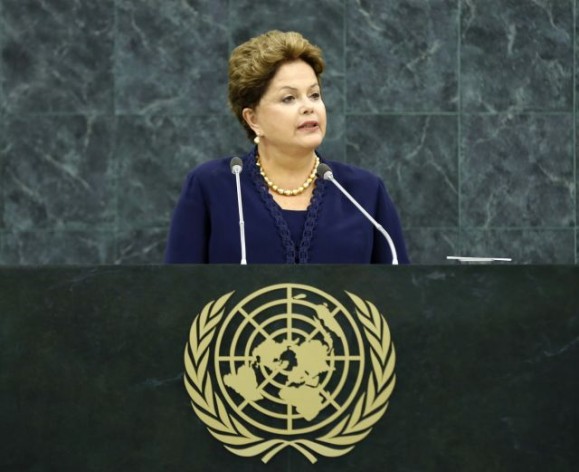 Departing from a longstanding tradition of closed-door diplomacy on bilateral disputes, she dropped a political bombshell on a room overflowing with world leaders, foreign ministers and ambassadors from 193 countries sitting in rapt silence.

Justifying her public criticism, she told delegates Tuesday that the problem of electronic surveillance goes beyond a bilateral relationship. “It affects the international community itself and demands a response from it.”

Rousseff said recent revelations concerning the activities of a global network of electronic espionage have caused indignation and repudiation in public opinion around the world.

But in Brazil, she said, “The situation was even more serious, as it emerged that we were targeted by this intrusion.”

She said that personal data of citizens was intercepted indiscriminately. Corporate information, often of high economic and even strategic value, was at the centre of espionage activity.

At the same time, Brazilian diplomatic missions, among them the Permanent Mission to the United Nations and the president’s office, had their communications intercepted, she charged.

Rousseff unleashed her attack even as U.S. President Barack Obama was awaiting his turn to address the General Assembly on the opening day of the annual high-level debate, which concludes Oct. 4.

By longstanding tradition, Brazil is the first speaker, followed by the United States.

Even though Obama had the right of reply, he did not address the issues raised by Rousseff, who also cancelled a proposed official visit to the White House last week protesting the electronic surveillance of her country.

“We have let the U.S. government know our disapproval, and demanded explanations, apologies and guarantees that such procedures will never be repeated,” she said.

According to documents released by U.S. whistleblower Edward Snowden, the illegal electronic surveillance of Brazil was conducted by the U.S. National Security Agency (NSA).

There has been considerable speculation that Brazil may initiate a General Assembly resolution condemning surveillance of member states by outside intelligence agencies. If it is brought before the Assembly, the United States and its Western allies may oppose it.

There have been reports that the NSA had also conducted similar surveillance of European countries and also the office of the European Union located in the U.N. neighbourhood.

Rousseff called on the United Nations to play a leading role in the effort to regulate the conduct of member states with regard to these technologies and the importance of the internet and social networks as a way to build democracy worldwide.

She said Brazil will present proposals for the establishment of a civilian multilateral framework for the governance and use of the Internet and to ensure the effective protection of data that travels through the web.

The Germany-based Der Spiegel magazine reported last month that NSA technicians have managed to decrypt the U.N.’s internal video teleconferencing (VTC) system, as part of its surveillance of the world body.

The combination of this new access to the U.N. and the cracked encryption code have led to “a dramatic improvement in VTC data quality and (the) ability to decrypt the VTC traffic,” the NSA agents reportedly said.

In the article, titled “How America Spies on Europe and the U.N.”, Spiegel said that in just under three weeks, the number of decrypted communications increased from 12 to 458.

Rousseff said she was publicly taking up the issue of surveillance because it was a matter of great importance and gravity.

Tampering in such a manner in the affairs of other countries is a breach of international law and is an affront to the principles that must guide the relations among them, especially among friendly nations, she added.

The right to safety of citizens of one country can never be guaranteed by violating the fundamental human and civil rights of another country’s citizens, she added.

And it’s even worse when private sector companies participate in this type of spying activity, she said.

Responding to the U.S. argument that any surveillance outside the United States was aimed only at monitoring terrorist activities, she said, “Brazil knows how to protect itself. We reject, fight and do not harbour terrorist groups.”