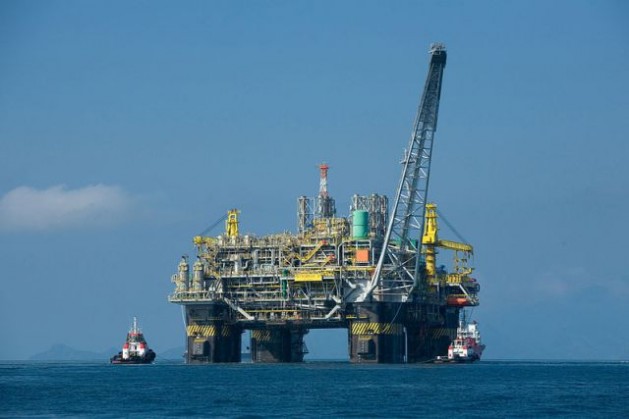 P-51, the first 100 percent Brazilian platform, has a capacity to produce 180,000 barrels of crude and six million cubic metres of gas per day. Credit: Divulgação Petrobras/ABr

RIO DE JANEIRO, Sep 16 2013 (IPS) - Reported U.S. spying on Brazil’s Petrobras oil firm revived the controversy over opening up the company, a symbol of Brazilian sovereignty since the 1950s, to foreign investment.

“The oil is ours” was the cry that arose with the discovery of oil and gas during the government of Getulio Vargas (1930-1945) and that became the slogan of the founding of Petrobras in 1953.

It took on new force in 1997, when then president Fernando Henrique Cardoso (1995-2003) declared the end of the state monopoly and opened the company up to local and foreign private investment.

It began to be heard again in 2007, when Petrobras discovered massive offshore oil reserves 180 km from the coast and 7,000 km below sea level, under a thick layer of salt.

And then again in 2010, when then president Luiz Inácio Lula da Silva (2003-2011) replaced the current concessions system, under which companies bid for the rights to explore new oil blocks, with a production-sharing regime between the state and private companies.

The Brazilian government is the largest shareholder in Petrobras, a publicly traded company whose closely guarded secrets – such as the volume of reserves or the deep water exploration technology it has developed – may already be in the hands of the U.S. government and its allies.

Secret documents from 2012 that were given to Greenwald by former NSA contractor Edward Snowden reportedly show that Petrobras was at the top of a list of targets for intelligence gathering.

The documents, part of a presentation used to train new agents on how to breach private computer networks, do not show to what extent NSA deciphered secret information from Petrobras’ computers.

But they do undermine the explanation presented by the U.S. agency with respect to earlier reports that it had intercepted the private communications of Brazilian citizens and of President Dilma Rousseff herself.

“Without a doubt, Petrobras does not represent a threat to the security of any country,” Rousseff said. “What it does represent is one of the world’s largest oil assets, a heritage of the Brazilian people.”

Petrobras has an annual turnover of around 90 billion dollars.

“It is clear that the motive was not security or fighting terrorism, but economic and strategic interests,” the president added.

The vulnerability of the company’s secrets has once again fanned the sentiment that “the oil is ours”, as well as arguments in favour of and against a greater opening to private investment in Petrobras.

One of the focuses of the controversy is the Libra oil field in the Santos Basin, one of Brazil’s richest offshore sub-salt deposits, set to be opened up to bidding in October.

The Brazilian government denied that the bidding would be suspended due to fears that leaked information could favour U.S. or British companies, as newspaper reports claimed.

The president of the association of Petrobras engineers, Silvio Sinedino, told IPS that “We are opposed to any bidding. We have long demanded that our oil should not be handed over the way it is here, and especially not in a fabulous oilfield where there is no risk because it has already been explored and has a confirmed capacity of 12 to 15 billion barrels of oil.”

Brazil’s sub-salt reserves are estimated at 80 to 100 billion barrels – enough to supply the country for 40 to 50 years, he noted.

“Even our military communications go through U.S. satellites, which are obviously controlled by agents from that country,” he added.

Adriano Pires, a consultant with the Brazilian Infrastructure Centre, said Petrobras was targeted by spying because “after 50 years of monopoly…no one knows the technological secrets of deep water oil drilling like Petrobras does.”

Describing the company as “number one” in that area, Pires told IPS that “no one knows more about the probability of finding oil.”

That knowledge, he said, is coveted at a time when possible sub-salt reserves off the coast of West Africa are being disputed.

But using the revelations of espionage to once again discuss the merits of opening up Petrobras to private investment is “foolishness” characteristic of “extreme nationalist” rhetoric, he argued.

“There is a great deal of noise and speculation about the espionage, fuelled even by people inside the government, to once again allege that the United States is trying to seize Brazil’s wealth,” he said.

“The sub-salt reserves are huge, and Petrobras cannot exploit them by itself, with its liquidity issues. We need U.S., Swedish, British, Norwegian or Australian companies to tap the reserves,” Pires said.

Tullo Vigevani, a political science professor at the São Paulo State University, said he was not surprised by the news of the alleged industrial espionage because “the energy question is a central focus of U.S. policy.”

“It is one of the key issues of politics at a global level,” he told IPS. “And information is an essential element. The new discoveries in Brazil, especially in the sub-salt area, require tight surveillance.”

Vigevani said that above and beyond the Brazilian government’s demand for explanations, any solution to defend the country’s strategic interests must be long-term in nature.