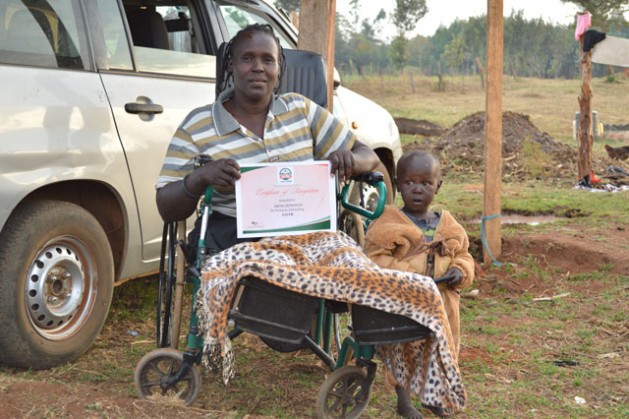 Irene Tuwei holding a certificate of recognition for being a top saver, she is a role of model of what simple and well-thought out economic interventions can do. Credit: Miriam Gathigah/IPS

GAZA, Mozambique, Apr 1 2016 (IPS) - Angelina Chiziane starts her day by getting her husband ready for work in a small village in the southern province of Gaza, Mozambique, some 216 kilometers away from the capital, Maputo.

She then makes the three kilometer journey to a nearby stream to fetch water and firewood and by the time she gets back home, her two children will be up and ready to be fed.

Chiziane then straps the youngest on her back and leaves with them to the farm where she will spend most of her day. At only 17 years old, this is her life and she will know no better.

These damning statistics by the Mozambican women’s organisation Forum Mulher [Women’s Forum] paint an accurate picture of the plight of a significant number of women and girls in this southern African nation.

Consequently, the Forum aggressively pushes for a female empowerment agenda, which has included calls for protection of women, promoting gender parity in education, encouraging society to embrace women in government while also raising awareness on women’s rights.

Nzira Deus who works at Forum Mulher says that “training on leadership and political participation of women is the key. Women in power can significantly improve the situation of women in Mozambique.”

In March this year, Forum Mulher presented the results of a study on the situation of women in Mozambique for the period 2005-2015 which confirmed that though Mozambique is a fast-growing economy, the same cannot be said of gender equality.

While the number of women in political leadership has steadily increased, the same cannot be said of the representation of women in other sectors of the economy.

Though gender experts such as Forum Mulher’s Karina Loferte Dulobo emphasise that women are twice as likely to invest in health and education, they are still largely peasant farmers and also — as is the case across Africa — account for 60 to 80 per cent of agricultural labourers.

As a result, women are affected more disproportionally by the extreme poverty which is still severe and widespread where a majority of Mozambican rural population live on less than US$1.25 a day.

Deus particularly decries the high prevalence of child marriages despite the “negative impact it has at a personal, social and economic level. Fighting this practice is a priority for us. If girls drop out of school to get married, they will remain poor and their children will have no better lives than their parents.”

Socio-economic experts such as Kenya’s Dan Mwangangi emphasise that tackling extreme poverty in Mozambique and in Africa indeed must go hand in hand with addressing the glaring gender inequality.

“Such studies on gender inequality are vital because they clearly show the magnitude of the problem and can be used as basis to establish various sustainable interventions to improve the situation of women,” Mwangangi explains.

“We have a huge number of women in Mozambique who have been denied an education, as a result, women remain underrepresented in main decision-making processes, be they political, economic or social and the majority of women [60 percent] are still illiterate,” he expounds.

He however told IPS that just because they are not educated does not mean that they are a lost cause.

Mwangangi gives the example of Kenya where simple economic empowerment ventures targeting rural poor women such as the Joyful Women Organisation (JOYWO) have completely transformed the lives of thousands of households across this East African nation.

JOYW0, which has so far directly benefitted over 200,000, is a Kenyan registered non-governmental organisation formed to empower Kenyan women economically and enhance house-hold food security among them through supporting their involvement in livelihood projects.

Operation in about 33 of the country’s 47 counties, JOYWO has mobilised over 150,000 women to participate in economic activities in excess of US$10 million under their revolutionary table banking concept which is now in its sixth year.

Members form small groups of between 15 and 35 members contributing money based on the group’s constitution, the money is then literally placed on the table and is immediately available to be borrowed as loan.

“The money is never banked revolving amongst the members, we all record the transactions in each meeting,” says Irene Tuwei, a member of the Chamgaa [which means the one who loves home in her Kalenjin native language] table banking group.

Members are free to pursue projects of their choice and most of them are involved in agriculture and livestock “we use what we have. Being in rural areas means that our money comes from our land,” she says.

Tuwei is a reformed alcoholic and a polio survivor who, like many, have found success in simple economic ventures.

“Women can achieve great things with very little money, what they need is direction and support. My initial contribution was US$2 only in an entire month. I have about US$1,000 in savings after only four years,” she says.

Her primary aim in JOYWO was to buy a plot and a cow “I wanted a place I could call home,” she says.

Tuwei is now the proud owner of a car which helps her move around, three motorbikes, cows, chicken and pigs.

Mwangangi says that Tuwei’s is only one of the many success stories that can be witnesses through simple but well thought out interventions.

Even as women continue to push for more seats at various decision-making processes, there is a great need for Africa to focus on both the rural and urban poor women and design simple but effective strategies to help alleviate the challenges they face, he says.