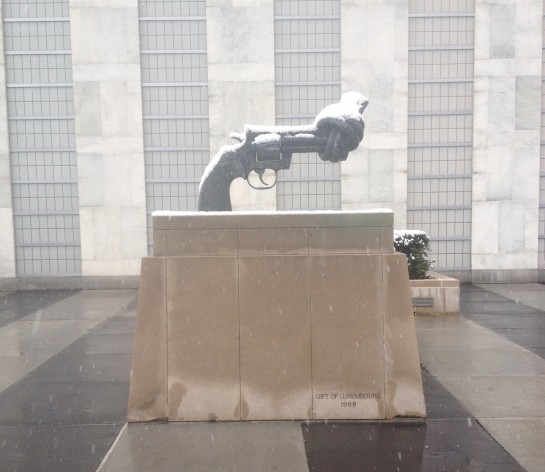 UNITED NATIONS, Aug 22 2016 (IPS) - The Arms Trade Treaty (ATT), which was aimed at curbing the flow of small arms and light weapons to war zones and politically-repressive regimes, is being openly violated by some of the world’s arms suppliers, according to military analysts and human rights organizations.

The ongoing conflicts and civil wars in Iraq, Libya, Afghanistan, Syria, Yemen, South Sudan and Ukraine are being fueled by millions of dollars in arms supplies – mostly from countries that have either signed or ratified the ATT, which came into force in December 2014.

Dr. Natalie Goldring, UN Consultant for the Acronym Institute for Disarmament Diplomacy and a Senior Fellow with the Security Studies Program at Georgetown University, told IPS: “The Arms Trade Treaty is incredibly important. Put simply, if fully implemented, it has the potential to save lives.”

But if implementation is not robust, the risk is that “business as usual” will continue, resulting in continued violations of international humanitarian and human rights law, she warned.

“Recent and proposed arms sales by States Parties and signatories to the ATT risk undermining the treaty,” said Dr Goldring, who has closely monitored the 20 year long negotiations for the ATT, which was adopted by the UN General Assembly in April 2013.

The reported violations of the international treaty have coincided with a weeklong meeting in Geneva, beginning August 22 through August 26, of ATT’s second Conference of States Parties (CSP).

Brian Wood, Head of Arms Control and Human Rights at Amnesty International, said the ATT has the potential to save millions of lives, which makes it especially alarming when states who have signed or even ratified the treaty seem to think they can continue to supply arms to forces known to commit and facilitate war crimes, and issue export licenses even where there is an overriding risk the weapons will contribute to serious human rights violations.

“There must be zero tolerance for states who think they can just pay lip service to the ATT.”

“The US government’s response to apparent Saudi bombings of civilian targets is to sell them more weapons? This makes no sense." -- Natalie Goldring

He said the need for more effective implementation is painfully obvious: “from Yemen to Syria to South Sudan, every day children are being killed and horribly maimed by bombs, civilians are threatened and detained at gunpoint, and armed groups are committing abuses with weapons produced by countries who are bound by the treaty,” he noted.

Providing a list of “unscrupulous arms transfers,” Amnesty International pointed out that the US, which has signed the ATT, and European Union (EU) member states who have ratified it, including Bulgaria, the Czech Republic, France and Italy, have continued to lavish small arms, light weapons, ammunition, armoured vehicles and policing equipment on Egypt, “despite a brutal crackdown on dissent by the authorities which has resulted in the unlawful killing of hundreds of protesters, thousands of arrests and reports of torture by detainees since 2013.”

Three of those attack helicopters are currently in service with South Sudan government forces, and they are reportedly awaiting the delivery of another.

Additionally, in March 2015 the US State Department approved possible military sales of equipment and logistical support to Saudi Arabia worth over $24 billion, and between March 2015 and June 2016, the UK approved the export of £3.4 billion (approximately $4.4 billion) worth of arms to Saudi Arabia.

“These approvals were given when the Saudi Arabia-led coalition was carrying out continuous, indiscriminate and disproportionate airstrikes and ground attacks on civilians in Yemen, some of which may amount to war crimes,” Amnesty International said in a statement released August 22.

Jeff Abramson of the Forum on the Arms Trade said the Geneva meeting takes place during a time of ongoing conflict and controversy over the responsible transfer and use of conventional weapons.

He said key topics that may be addressed, either formally or informally, include better promoting transparency in the arms trade and arming of Saudi Arabia, in light of the humanitarian catastrophe in Yemen — including recent US notification of possible tank sales to Riyadh

She said the written notification of the proposed sale notes that 20 of the tanks are intended as “battle damage replacements for their existing fleet.”

As Brookings Institution Scholar Bruce Riedel has noted, the Saudis are only using tanks in combat along the Saudi-Yemeni border.

“The US government’s response to apparent Saudi bombings of civilian targets is to sell them more weapons? This makes no sense. This is part of a pattern of continued arms transfers taking place despite a high risk that they will be used to violate international human rights and humanitarian law,. ” declared Dr Goldring.

She said States parties to the ATT are required to address the risks of diversion or misuse of the weapons they provide. But if this criteria are taken seriously, it’s virtually impossible to justify continued weapons deals with countries such as Saudi Arabia and Egypt.

Countries without strong export control systems have argued that it will take time to fully implement the ATT, while other countries such as the United States have domestic impediments to ratifying the treaty.

But one of the treaty’s strengths, Dr Goldring, argued is its specification of conditions under which arms transfers should be blocked. States do not have to wait for ratification or accession to the treaty to begin implementing such standards.

“The ATT is a new treaty, but we can’t afford to ‘ease into’ it. While we discuss the treaty, lives are being lost around the world. We need to aggressively implement the ATT from the start,” Dr Goldring said.

Another important issue in full implementation of the ATT, she noted, is making the global weapons trade transparent, so that citizens can understand the commitments their governments are making in their names.

“Governments should not be transferring weapons unless they are willing to take responsibility for them. Their opposition to openness and transparency raises questions about what they’re trying to hide,” she added.

But in the end, although it’s important to bring transparency to the discussion of these issues, the real issue is whether the transfers are being controlled. Recent sales raise significant concerns in this regard, Dr Goldring said.

“The Conference of States Parties that is being held this week in Geneva presents a critical opportunity to face these issues. To strengthen the Arms Trade Treaty, the conference must focus on this key substantive concern of the risks entailed in continuing business as usual. States should not allow their attention to be diverted to process issues,” said Dr Goldring who is currently participating in the Geneva meeting,