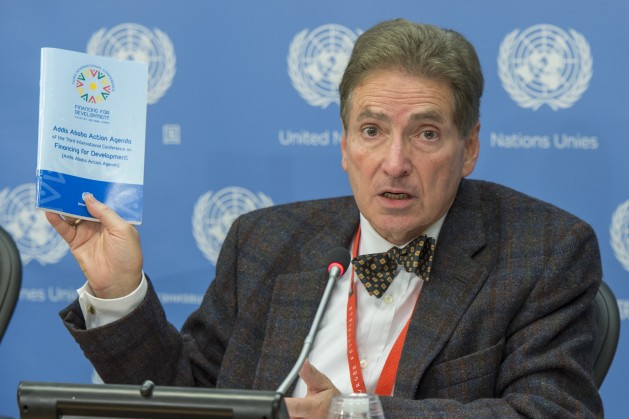 “The United Nations must no longer tolerate the scandal of secrecy jurisdictions that facilitate tax evasion, corruption and money-laundering,” said the UN Independent Expert on the promotion of a democratic and equitable international order Alfred de Zayas to the General Assembly. Secrecy jurisdictions are also known as tax havens.

De Zayas particularly pointed to the human costs of such actions, noting that trillions of dollars kept offshore to escape taxation take away necessary resources to combat extreme poverty and address climate change.

He described this “systematic looting of society” in a new report presented to the General Assembly where he found that up to $32 trillion USD is held in offshore secrecy jurisdictions around the world. According to the UN Conference on Trade and Development (UNCTAD), this costs developing countries more than $100 billion USD per year.

“Corruption, bribery, tax fraud and tax evasion have such grave effects on human dignity, human rights and human welfare that they shock the conscience of mankind," -- Alfred de Zayas

In 2011 alone, developing nations lost almost $950 billion USD due to illicit financial flows, including tax evasion. According to the Organisation for Economic Cooperation and Development (OECD), this was seven times more than the official development assistance, the official term for aid, provided that year and substantially higher than the estimated costs of achieving the Millennium Development Goals.

Concerns for financial secrecy and tax evasion was reignited in April 2016 when the International Consortium of Investigative Journalists (ICIJ) released the Panama Papers which revealed how a single law firm in Panama aided thousands of prominent figures to create secretive offshore companies and use tax havens.

Within the almost 12 million leaked documents is the case of the Heritage Oil and Gas Ltd Company which Panamanian law firm Mossack Fonseca allegedly helped to avoid paying $404 million in taxes in Uganda by relocating to the tax haven of Mauritius. For Uganda, which has poor health services and one of the highest rates of maternal deaths in the world, this tax revenue represent more than the country’s annual health budget. Mossack Fonseca have denied any wrongdoing.

The latest leak by ICIJ and media partners has exposed politicians and others’ use of over 175,000 offshore companies in the Bahamas. Among those named in the Bahamas Leaks is the European Union’s former Commissioner for Competition Neelie Kroes who failed to declare her directorship of an offshore firm while in office.

In May, a group of 300 leading economists wrote to world leaders that there is no economic justification for tax havens and that offshore financial secrecy must end.

“This abusive global system needs to be brought to a rapid end. That is what is meant by good governance under the global commitment to sustainable development,” said Jeffrey Sachs, Director of Columbia University’s Earth Institute and special advisor to Secretary-General Ban Ki-moon.

Sachs and others highlighted the need for new global rules requiring companies to publicly report taxable activities in every country they operate.

In addition to the need to increase transparency and accountability, de Zayas urged the General Assembly to take the lead by drafting a convention outlawing tax havens worldwide and establishing an inter-governmental tax body to draft and enforce measures not only to ensure multinational corporations pay their fair share of taxes, but also to prosecute perpetrators.

“Corruption, bribery, tax fraud and tax evasion have such grave effects on human dignity, human rights and human welfare that they shock the conscience of mankind. They should be prosecuted nationally and internationally,” he stated.

The Independent Expert also called on the protection of whistleblowers who are often the most “effective” in shining a light on corruption.

“Whistleblowers, who should be considered as human rights defenders as they significantly contribute to a culture of transparency and accountability, often pay a heavy price. It is in the spirit of a democratic and equitable international order to adopt legislation to protect whistleblowers and witnesses from reprisals and to provide them with easy-to-access avenues to make disclosures,” he added.

De Zayas particularly looked to the newly selected UN Secretary-General António Guterres for robust action, noting that he has a “unique opportunity” to fight against tax evasion and illicit financial flows and should thus convene a world conference on the issue. Guterres will replace current Secretary-General Ban Ki-moon on 1 January 2017.

“I sincerely hope that the abolition of tax havens and the creation of a United Nations Tax Authority with a mandate to combat offshore tax avoidance and evasion, and to outlaw tax havens, will be among Mr. Guterres’ priorities,” he stated.