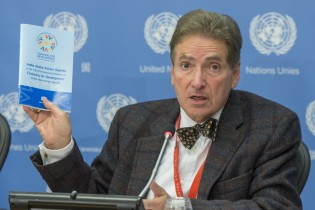 Momentum Builds in U.S., Beyond to End Corporate Tax Evasion

By Carey L. Biron
The U.S. government’s main watchdog on Monday reported that U.S. corporations are paying taxes on less than half of their declared income, largely due to dozens of tax breaks that have come under increased scrutiny in recent months.

By Carey L. Biron
The research arm of the U.S. Congress is warning that U.S. corporations’ use of tax havens has risen substantially in recent years, with companies offering massively inflated profit reports from small countries with loose tax regulations.

By Daan Bauwens
With governments and international institutions focusing increasingly on a stronger role for the private sector in development aid, a new report by the European Network on Debt and Development (Eurodad) released yesterday suggests there is good reason to doubt this approach.
ADVERTISEMENT ADVERTISEMENT