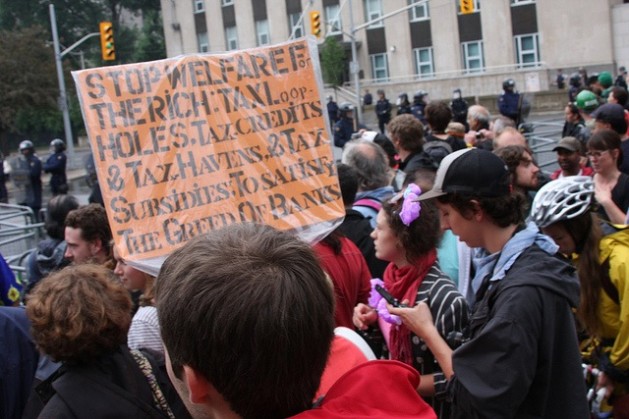 Activists at a G20 protest say no to 'welfare for the rich’. Credit: Tim and Selena Middleton/CC-BY-2.0

HELSINKI, Oct 6 2012 (IPS) - The City of Helsinki added its voice to a growing global call against corporate tax evasion with the passage of a new responsibility strategy that leaves no room for unethical business practices.

Last week, 85 city councillors from Finland’s capital voted to sever business ties with companies operating in, or having links to, tax havens.

The resolution – which passed 78-4 in the City Council, the country’s highest decision-making body in charge of local affairs – acknowledged that tax evasion undermines the capacity of municipalities to provide social services.

The council also recognised that tax havens deprive developing countries of vital tax revenues and denies them the opportunity to benefit fully from world trade.

Tax havens are either territories or countries whose authorities allow businesses or individuals to deposit their wealth at very low tax rates or, in some cases, pay no taxes at all.

The London-based Tax Justice Network has identified 10 of the most attractive tax havens around the world, including Bahrain, the Cayman Islands, Jersey, Singapore and Switzerland.

Tax havens are quickly becoming an election issue here, as the country prepares to head to the polls for municipal elections in three weeks. Minister of Finance, Jutta Urpilainen of the Social Democratic Party, flagged the topic during a parliamentary discussion Thursday by supporting the proposal that municipalities boycott companies operating in tax havens.

The recent decision means Helsinki will no longer provide procurement contracts to companies whose operations are located in tax havens.

With a budget of about four billion euros, Helsinki is Finland’s biggest consumer of goods and services but it must now be more wary of who it chooses to do business with by demanding that companies reveal where they operate.

Taxes from enterprises are the primary source of income for Finnish municipalities, enabling them to provide public services such as education, health, housing and care for the elderly.

“Companies operating through tax havens pose a lethal threat to the welfare state in Finland and in all countries, especially in developing countries,” according to the resolution’s author, Thomas Wallgren, a Social Democratic councillor who has been leading the charge against tax havens.

He cited the example of Accra Breweries in Ghana, owned by South Africa’s SAB Miller. For five consecutive years, this multi-billion-dollar company paid no taxes at all to the Ghanaian government, while people who sold empty bottles on the streets paid, and continue to pay, value-added tax and municipal tax.

Implementation of the city council’s resolution may still run up against obstacles, according to legal experts here, who say the issue is compounded by the fact that European Union competition laws do not allow companies to be denied public procurement contracts on the basis of their location in tax havens.

“The amount of money in tax havens is a big question mark,” Matti Kohonen, a researcher with the Tax Justice Network, told IPS. “We live in a world of high financial secrecy, which is a direct cause of the financial crisis. We don’t know where the money is and that is a very serious problem,” Kohonen said.

He estimates that global financial transactions that are either illicit, or involve some element of criminality or tax evasion, are in the order of one trillion dollars annually, about one-tenth of the United States’ gross domestic product (GDP).

The lost revenue stemming from these actions is somewhere close to 100 billion dollars, the amount the United Nations says is required to fulfil the Millennium Development Goals.

The Tax Justice Networks also estimates that 21 to 36 trillion dollars, about two to three times the GDP of the U.S., are hidden in tax havens.

According to Kohonen, another common method for avoiding taxes is through transfer pricing, a price-setting mechanism for selling goods or services between different departments of the same company or between a parent company and its subsidiary.

An estimate released two years ago by the Organisation for Economic Co-operation and Development (OECD), which sets the tax rules for transfer pricing, says this practice constitutes 70 percent of world trade.

This year the Finnish Tax Administration reported that the government loses 320 million euros of tax revenue annually due to price manipulations in transfer pricing. But Kohonen says that may only be the “tip of the iceberg” because most firms operating in tax havens are shrouded in secrecy.

Rather than have global transfer rules decided by the OECD, Kohonen believes it would be far more democratic for the U.N. to determine these regulations.

“It is a scandal that we have rules that govern world trade but no rules for the world of taxation apart from the rich countries’ lobby group, which is the OECD. We need multilateral rules or some other rules on how to tax multinationals,” he stressed.

Helsinki’s initiative is not an isolated case but part of a global campaign to galvanise a groundswell of public support that could in turn create sufficient political will to take action against tax havens.

“The whole point of the campaign is to put additional pressure on national authorities, stock exchange regulators and on the European Union to have more stringent requirements for multinational companies,” Kohonen told IPS.

He says Helsinki’s initiative comes hard on the heels of similar measures taken in two Swedish cities, Malmö and Kalmar, as well as the municipality of Ulstein in Norway, all in an attempt to rein in the activities of tax evading companies.

In spite of the legal obstacles impeding the implementation of Helsinki’s city council decision, Wallgren said many other Finnish municipalities have been encouraged by the momentum and are following suit. The decision is “catching on like wild fire” around cities and municipalities, he said.

“The fight against the tax havens will be a long one but because it is also a fight for the survival of the welfare state it is worth fighting,” he added.

Kohonen likened the current movement in Finland to the Jubilee Debt Campaign of 1990, which forced developed countries to reduce poor countries’ debt.

“Once it becomes the focus of millions of people around the globe, politicians can no longer avoid the problem,” he said.