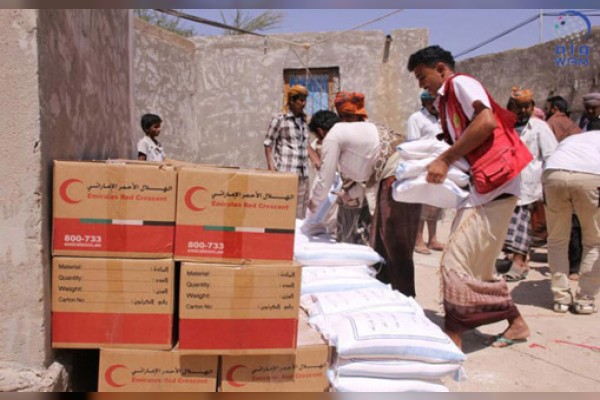 ABU DHABI, Mar 24 2017 - The total UAE foreign assistance provided to Yemen, between April 2015 and March 2017, within the framework of the UAE’s efficient humanitarian and development role and its rebuilding projects to support the Yemeni people, amounted to AED7.3 billion (US$2 billion).

The assistance aims to reduce the suffering of the Yemenis and is in compliance with the UAE’s humanitarian and development approach and its desire to establish development, security and stability in the country.

The UAE’s aid targeted about 10 million Yemeni people, including four million children. It provided polio and measles vaccines to 488,000 children, including 130,000 infants under the age of one, and 358,000 children between the ages of 1 and 5, in 11 Yemeni governorates.

The UAE’s aid targeted about 10 million Yemeni people, including four million children. It provided polio and measles vaccines to 488,000 children, including 130,000 infants under the age of one, and 358,000 children between the ages of 1 and 5, in 11 Yemeni governorates.
Its humanitarian assistance included food aid totalling 172,000 tonnes and more than 111 tonnes of medication and medical supplies, as well as the provision of ambulances and medical devices, while 235.8 tonnes of food were sent on a daily basis.

The UAE’s development assistance to Yemen, during this period, reached AED5.3 billion ($1.45 billion), while its foreign development assistance, which was distributed to several sectors, reached AED985.58 million ($268.33 million) in support of the power generation sector. The operational costs of generating electricity and providing electricity supply services were also covered. Diesel and fuel generators were supplied to the governorates of Aden, Abyan, Hadramout, Marib and Mahra.

The UAE also built power plants in Aden, in addition to providing spare parts and covering maintenance costs and provided a new batch of spare parts and filters for the electricity sector, as part of its efforts to solve the power outage problem in Mukalla.

The UAE Red Crescent has recently established a water generator project, powered by solar energy, in the Al-Aik region of Al-Reeda and Qusayr in the coast of Hadramaut.

As part of its efforts to support the Yemeni public budget, funds amounting to AED2.63 billion ($715.47 million), equivalent to 36 percent of the UAE’s assistance were provided, to cover the most important budget items that relate to the payment of salaries of government employees.