The Ocean Conference: An Integrated Vision that must be Delivered

UNITED NATIONS, May 24 2017 (IPS) - In March 2015 at the Sendai World Conference for Disaster Risk Reduction, the then President of Kirbati, Anote Tong, made it very clear how vulnerable his country was to climate and disaster risk, when he informed the room (which was sadly less than half full) that his country had purchased land in Fiji. 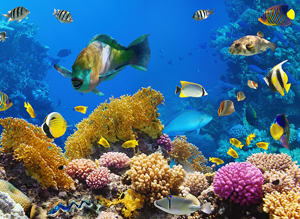 The reason was simple: the threat that climate change to every aspect of life and living of his country, and that belief that one day, should the world not change its path on emissions that it might simply disappear under the waves.

At the Ocean Conference (scheduled to take place 5-9 June) in New York, nations will gather to discuss how best to deliver on Sustainable Development Goal 14, Life Below Water. This event is critical because it will, for perhaps the first time, focus the international community on how critical our oceans to our life and livelihoods.

Even a glance at the targets and indicators of this goal make that clear: the Ocean SDG is about poverty reduction, economic development, adapting to climate change and protecting the environment, not just the health of the oceans and those who depend on it. Delivering on SDG 13 will help deliver on the other 16 and they in turn will be essential to its delivery.

For Small Island Developing States (SIDS), such as Kiribati, this integrated approach is not just important, it is critical. On the one hand their ocean environment provides them with critical needs, with communications, transportation, livelihoods, trade and more. But it also makes them vulnerable in many inter-connected ways.

Logistics, transportation and communications are complex and expensive given these island nations’ distance to other nations and distance between their own islands. Their income is vulnerable, with often middle-income status masking very narrow productive sectors, such as tourism. Often lacking in fossil fuels themselves, they import heavily and in some cases access to energy remains poor. And these vulnerabilities are exacerbated by the increasing disaster and climate risk, the growing threat of cyclones and the seemingly every-rising sea-levels.

We can look across a diverse set of small islands to see this in practice. The Federated States of Micronesia (and its ‘associated states’) has a population of just over a 100,000 consist of 607 separate islands of just over 700 km squared within waters of more than 2,600,000 kms.

Tourism accounts for a very high percentage of GDP for small islands, making these nations very susceptible to climate and disaster risk; in the Maldives, for example, it accounts for 28% of GDP and more than 60% of its foreign exchange receipts. The Solomon Islands and Tuvalu meanwhile, have at times drawn close to half of their entire national income from international development assistance. Palau has been increasing the percentage of its population that have access to energy and has reached nearly 70% but despite significant potential for renewable energy it still relies on almost all of its power generation on the import of fossil fuels.

Meanwhile, climate change is an existential threat, and not only to Kiribati; the Maldives, the Marshall Islands as well as Kiribati all have more than 90% of their population living below five metres above sea level. In these and many other small island nations, sea levels are already eroding land, significantly threatening tourism, making agricultural land untenable, increasingly infiltrating fresh water wells, while storm surges and extremely hide tides are in some cases increasing in both number and severity.

Given the multiplicity of inter-connected vulnerabilities and risks that face SIDS in particular, the ocean conference has the task of delivering a thoroughly integrated vision for not only achieving on the significant ambition of SDG 13; it can and it must ensure a message of integration is at the heart of its deliberations, and especially its solutions to the complex inter-related issues of SIDS.

Tackling economic development, poverty reduction, coastal erosion, agricultural adaptation and more, can only be successful if it is thought of as a single inter-connected problem, to which must be applied integrated solutions.

The Samoa pathway developed by SIDS in 2014 makes such an integrated approach clear when it states that ‘promoting the integrated and sustainable management of natural resources and ecosystems that supports, inter alia, economic, social and human development while facilitating ecosystem conservation, regeneration, restoration and resilience in the face of new and emerging challenges’ is key to sustainable development.

With Fiji both the co-chair of the Oceans conference and current president of the climate negotiations, there is no better opportunity to deliver on this challenging ambition, an ambition that binds actors together in a vision to deliver on all their global commitments -Sendai, Paris, the SDGs – at the country level. It is here where UNDP works, and here that the commitments to act, integrated, need to be delivered.