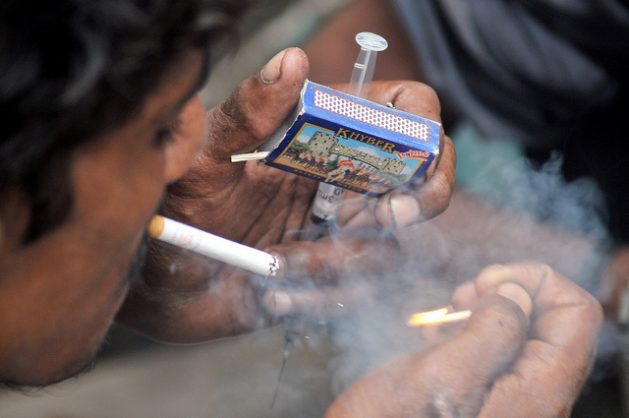 UNITED NATIONS, Jun 22 2017 (IPS) - Opioids are among the most devastating drugs and are creating a crisis of epidemic proportions, said the UN drug agency.

In its annual World Drug Report, the UN Office on Drugs and Crime (UNODC) found concerning trends in drug use around the world.

In 2015, an estimated quarter of a billion people used drugs at least once. Of these, almost 30 million suffered from drug use disorders including dependence. UNODC found that opioids were the most harmful drug type, accounting for 70 percent of negative health impacts associated with drug use disorders worldwide, and its production is only increasing.

“[Opioid use] is a really dramatic epidemic…they are really, in terms of burden of disease, at the top of the scale,” said UNODC’s Chief of Drug Prevention and Health Branch Gilberto Gerra to IPS.

The use of opioids, including heroin, morphine, and fentanyl, heighten the risks of acquiring diseases such as HIV or hepatitis C through unsafe injecting practices as well as overdoses and death.

Globally, there are an estimated minimum of 190,000 premature deaths related to drugs that were mostly avoidable. A large proportion of those deaths is attributed to the use of opioids.

Though affects many countries in the world, the opioid crisis is particularly prevalent in the United States.

Mostly driven by opioids, approximately one quarter of the estimated drug-related deaths worldwide occur in the U.S.

Overdose deaths in the North American nation more than tripled from almost 17,000 to over 52,000 annually between 1999 and 2015, and increased by 11 percent in the past year alone, reaching the highest level ever recorded.

In fact, more Americans died from the misuse of opioids in 2016 than in the entirety of the Vietnam War, noted Gerra.

In the state of Maryland, opioid-related deaths quadrupled since 2010 and deaths from fentanyl increased 38-fold in the past decade. In response to the crisis, Governor Larry Hogan declared a state of emergency, stating: “We need to treat this crisis the exact same way we would treat any other state emergency…this is about taking an all-hands-on-deck approach so that together we can save the lives of thousands of Marylanders.”

Though some states have begun the place restrictions on the accessibility of pharmaceutical opioids, including a Florida bill that aims to restrict painkiller prescriptions to a five-day supply, Gerra stressed the importance of focusing on not only supply, but also the demand side of opioids.

In the U.S., heroin use has increased significantly, and the Centers for Disease Control has suggested that it is linked to prescription opioid abuse.

“There needs to be a big reflection on this issue in North America,” Gerra said.

However, the potential changes in healthcare in the U.S. may impact access to treatment.

In particular, the current health care bill proposes cuts to expanded Medicaid, which is used by many states hardest hit by the opioid epidemic to boost their response by paying for medication, therapy, and other treatment services.

Health advocates criticised the proposed cuts during President Trump’s first meeting of the President’s Commission on Combating Drug Addiction and the Opioid Crisis which is charged with finding solutions for the epidemic.

“If we make it harder for people to get health care coverage, it is going to make this crisis worse,” said North Carolina’s Governor Roy Cooper.

Gerra highlighted the importance of treatment, pointing to the need for personalised interventions and close supervision by doctors or therapists in order to avoid opioid misuse.

He also added that people possessing drugs for personal consumption should not be criminalised as it steers them away from seeking treatment for fear of punishment.

Though approaches to global drug policy have been contentious and diverse, countries in the General Assembly session on the world drug problem (UNGASS) in 2016 unanimously agreed for the first time to a people-centered approach which sees the drug problem as a health disorder rather than a criminal or moral issue.

“We cannot respond to people trapped by drugs with a punitive approach. We have to tell them that we are here, we are aware of your condition and behaviour, you are aware that you are in trouble, please come and we will do what we can to help you and your family to overcome this problem in a very humane and human-rights, science-based way,” Gerra told IPS.

Gerra called for a continuum of care approach to help keep people using drugs like heroin safe through services like needle exchange programs and to provide long-term accessible and affordable treatment once users are ready.

“No one should be left behind in the delivery of prevention and treatment interventions,” UNODC said in its report.

Gerra noted that prevention is by far the most cost-effective intervention in the long run, but approaches must be science-based in order to be effective.

“People don’t understand that there is a science behind prevention—they continue to use initiatives that are well-intentioned but completely not science-based [and] then they say prevention is not working,” he said, pointing to science-based methodologies such as life skills education and drug education to children.

The globally agreed Sustainable Development Goals, whose motto is to leave no one behind, includes a target to strengthen the prevention and treatment of substance abuse.