A Global Call for Journalists’ Safety 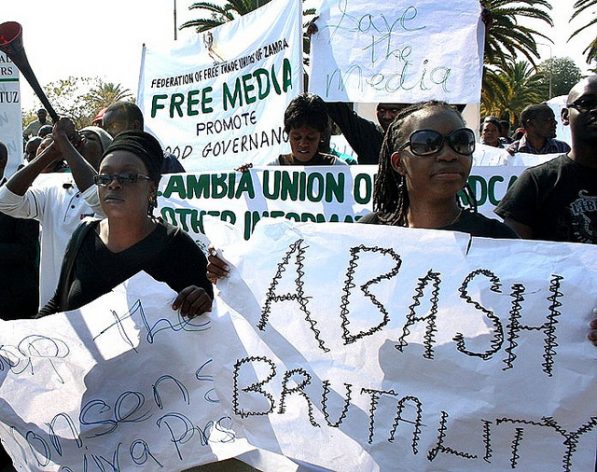 Lusaka-based journalists march on the Great East Road campaigning for the attacks against journalists to stop. Credit: Kelvin Kachingwe/IPS

UNITED NATIONS, Jul 9 2017 (IPS) - The UN system and its member states must develop policies to protect journalists and end impunity for crimes against them, said key stakeholders during a meeting.

A multi stakeholder consultation held in Geneva brought together representatives from governments, civil society, media, and academia to discuss developments in the area of safety of journalists and the issue of impunity.

According to the Committee to Protect Journalists (CPJ), some 1,246 journalists have been killed since 1992. The deadliest countries were those in conflict situations including Iraq, Syria, Philippines, and Somalia.

There were also almost 260 journalists in jail at the end of 2016, the most CPJ has ever documented. Turkey is the world’s leading jailer of journalists with over 145 imprisoned journalists, more than China, Egypt, and Iran combined.

“Online attacks now occur at a frequency and scale that we’ve never experienced before. We need new ways to protect journalists, to deal with what technology has enabled because computational propaganda means to stifle any challenge or dissent against power,” said CEO of Philippines newspaper Rappler Maria Ressa during the consultation.

In an effort to address these complex issues, stakeholders formulated numerous recommendations to reinforce and improve the UN Plan of Action on the Safety of Journalists and the Issue of Impunity adopted by the UN Chief Executives Board in 2012.

Among the main challenges highlighted by stakeholders was how to translate the UN Plan of Action into national policies and practices.

“We need to reboot our thinking of the UN Plan to bridge the gap between the progress made at the international level and the situation on the ground,” said Executive Director of International Media Support at the meeting organised by UNESCO and the Office of the UN High Commissioner for Human Rights (OHCHR).

UNESCO’s Assistant Director-General for Communication and Information Frank La Rue stressed the importance of governments to set up national mechanisms for the safety of journalists and the report on such policies to help end impunity for attacks against journalists.

Participants also emphasized the importance of UN leadership and the strengthening of the UN system to better address journalists’ safety, including enhancing inter-agency coordination and the mainstreaming of safety issues in agencies’ programming.

They also urged making better use of existing avenues and mechanisms in the UN system in order to improve monitoring and reporting on attacks against journalists, especially in the context of the Sustainable Development Goals (SDGs).

Within the internationally agreed agenda is goal 16 which calls for the creation of peaceful and inclusive societies with effective and accountable institutions and highlights the need to ensure public access to information and protect fundamental freedoms.

Journalist safety and ending impunity are therefore essential to achieve this goal.

The recommendations will be finalised into a non-binding outcome document to help inform stakeholder actions in the future.