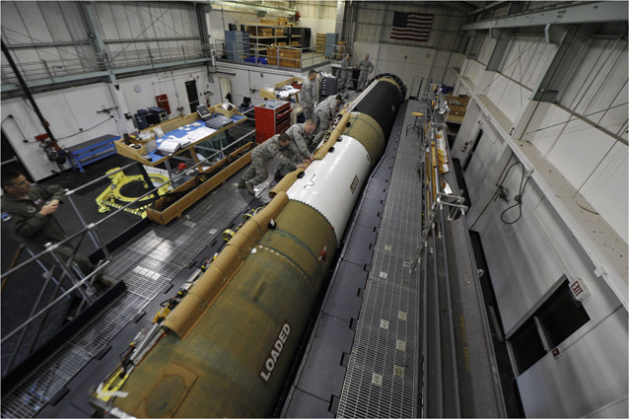 WASHINGTON DC, Dec 1 2017 (IPS) - Over the past year, cavalier and reckless statements from President Donald Trump about nuclear weapons and his threat to unleash “fire and fury” against North Korea have heightened fears about Cold War-era policies and procedures that put the authority to launch nuclear weapons in his hands alone.

Partially in response, the Senate Foreign Relations Committee, for the first time since 1976, held a hearing on the “executive’s authority to use nuclear weapons.” The Nov. 14 hearing should be just the start of a process that leads to changes that reduce the risk of nuclear miscalculation and establishes that the United States will not be the first to use nuclear weapons.

Since the end of the Cold War, U.S. and Soviet/Russian nuclear arsenals have been slashed through verifiable arms reduction agreements. Yet, each side still deploys 1,550 strategic nuclear weapons as permitted by the New Strategic Arms Reduction Treaty (New START), which is far more than required to deter a nuclear attack.

Each maintains a significant portion of its land- and sea-based forces on a prompt-launch posture to guard against a “disarming” first strike. The resulting launch procedures would, in some scenarios, give the president only minutes to decide whether to avenge such an attack with hundreds of nuclear-armed missiles.

These policies increase the risk of catastrophic miscalculation. In the nuclear age, there have been several incidents in which false signals of an attack have prompted U.S. and Russian officials to consider, in the dead of the night and under the pressure of time, launching nuclear weapons in retaliation.

Continuing to vest such destructive power in the hands of one person and requiring launch decisions to be made in minutes, and without congressional authorization, is undemocratic and dangerous. No reliable safeguards are in place to prevent an impulsive and irrational decision by Trump to use nuclear weapons.

Days after the Senate hearing, the head of U.S. Strategic Command, Air Force Gen. John Hyten, tried to assuage congressional concerns, saying he would push back against a nuclear strike order from the president if it were “illegal.” That is cold comfort given the general acknowledged that, if the president insists, “we’ll work out a legal option.”

Rather than accept such empty assurances, Congress should demand and the Pentagon should provide more information on U.S. nuclear employment strategy, including targeting data, attack options, damage expectancy requirements, and estimated civilian casualties; and it should publicly review the legal rationale for these plans, which are currently not shared with members of Congress.

Despite the dangers, defenders of the status quo argue that altering the current system, including forgoing the first-use option, would undermine the credibility of deterrence and somehow encourage aggressors.

In reality, the current “launch under attack” policy is unnecessary because U.S. nuclear forces and command-and-control systems could withstand even a massive attack, particularly the submarine-based weapons, and remaining nuclear forces would be more than sufficient to deliver a devastating blow to any nuclear aggressor.

Eliminating the requirement to launch intercontinental ballistic missiles under attack would increase the time available for the president and other civilian and military advisers to more soberly weigh the possible use of nuclear weapons in retaliation for a warning of an attack against the United States or its allies.

Furthermore, given the conventional military superiority of the United States and its allies, there is no plausible circumstance that could justify legally, morally, or militarily the use of nuclear weapons to deal with a non-nuclear threat.

Nuclear weapons are not necessary to deter or respond to nuclear terrorism or to a potential chemical or biological weapons attack or cyberattack by state or nonstate actors. Even if there were to be a conventional military conflict with Russia or North Korea, the first use of nuclear weapons would be counterproductive because it would likely trigger an uncontrollable and potentially suicidal nuclear exchange.

As Vice President Joseph Biden said in remarks delivered in January 2017, “Given our non-nuclear capabilities and the nature of today’s threats, it’s hard to envision a plausible scenario in which the first use of nuclear weapons by the United States would be necessary or make sense.”

Given the indiscriminate, widespread, and long-term consequences of nuclear weapons, it is also hard to envision a nuclear first use scenario that is “legal” despite Pentagon claims that current nuclear weapons employment options meet the principles of “distinction and proportionality and seek to minimize collateral damage to civilian populations” as required by the Law of War.

The Senate’s recent hearing on nuclear weapons use policy must not be its last. It is past time to move away from outdated and dangerous, prompt-launch nuclear procedures. The fate of millions of people should not depend on the good judgment of one person, no matter who he or she may be.