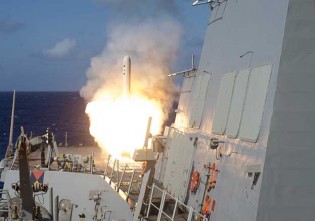 By Daryl G. Kimball
Most successful U.S. presidents have actively led efforts to advance arms control agreements and reduce the risk of nuclear war. Although much has been achieved over the years, there are still 14,000 nuclear weapons and nine nuclear-armed states; progress on disarmament has stalled; and tensions between the United States and its main nuclear adversaries—Russia and China—are rising.

By Daryl G. Kimball
Forty years ago, on Nov. 9, the U.S. Defense Department detected an imminent nuclear attack against the United States through the early-warning system of the North American Aerospace Defense Command (NORAD). U.S. bomber and missile forces went on full alert, and the emergency command post, known as the “doomsday plane,” took to the air.

By Daryl G. Kimball
Over the long course of the nuclear age, millions of people around the world, often led by a young generation of clear-eyed activists, have stood up to demand meaningful, immediate international action to halt, reduce, and end the threat posed by nuclear weapons to humankind and the planet.

By Daryl G. Kimball
Everybody knows that nuclear weapons have been used twice in wartime and with terrible consequences. Often overlooked, however, is the large-scale, postwar use of nuclear weapons:

By Daryl G. Kimball
Smart U.S. leadership is an essential part of the nuclear risk reduction equation. Unfortunately, after more than two years into President Donald Trump’s term in office, his administration has failed to present a credible strategy to reduce the risks posed by the still enormous U.S. and Russian nuclear arsenals, which comprise more than 90 percent of the world’s nuclear weapons.

By Daryl G. Kimball
Fifty years ago, shortly after the conclusion of the 1968 nuclear Nonproliferation Treaty (NPT), the United States and the Soviet Union launched the Strategic Arms Limitation Talks (SALT).

By Daryl G. Kimball
Next month, it is very likely the Trump administration will take the next step toward fulfilling the president’s threat to “terminate” one of the most far-reaching and most successful nuclear arms reduction agreements: the 1987 Intermediate-Range Nuclear Forces (INF) Treaty, which led to the verifiable elimination of 2,692 Soviet and U.S. missiles based in Europe.

By Daryl G. Kimball and Kingston Reif
Under the influence of his new National Security Advisor, John Bolton, Trump announced Saturday at a campaign rally that he will “terminate” a key nuclear arms control agreement that helped end the Cold War race–the Intermediate-Range Nuclear Forces (INF) Treaty in response to a long-running dispute over Russian noncompliance with the treaty.

By Daryl G. Kimball
Stanley Kubrick’s classic 1964 film “Dr. Strangelove” delivers an eerily accurate depiction of the absurd logic and catastrophic risks of U.S. and Russian Cold War nuclear deterrence strategy, but for one key detail: President Merkin Muffley was wrong when he said, “It is the avowed policy of our country never to strike first with nuclear weapons.” But it should be.

By Daryl G. Kimball
The global nuclear nonproliferation system has always relied on responsible leadership from the United States and other global powers. The effort to create, extend, and strengthen the nuclear Nonproliferation Treaty (NPT), which was opened for signature 50 years ago on July 1, 1968, has succeeded, albeit imperfectly, because most U.S. presidents have made good faith efforts to back up U.S. legal and political commitments on nuclear arms control, nonproliferation, and disarmament.

By Daryl G. Kimball
For most of the past year, North Korea’s provocative long-range missile launches and a high-yield nuclear test, combined with the reckless threats of “fire and fury” and “preventive war” from the White House, have raised tensions and increased the threat of a catastrophic conflict in the region. Some of us warned that nuclear war was closer than at any point since the Cold War.

By Daryl G. Kimball
One year into the unorthodox presidency of Donald Trump, the United States faces an array of complex and dangerous foreign policy challenges that require principled leadership, pragmatism, patience, and smart diplomacy.

By Daryl G. Kimball
Over the past year, cavalier and reckless statements from President Donald Trump about nuclear weapons and his threat to unleash “fire and fury” against North Korea have heightened fears about Cold War-era policies and procedures that put the authority to launch nuclear weapons in his hands alone.

By Daryl G. Kimball
Just six months into the administration of President Donald Trump, the war of words and nuclear threats between the United States and North Korea have escalated, and a peaceful resolution to the escalating crisis is more difficult than ever to achieve.
Next Page »
ADVERTISEMENT ADVERTISEMENT