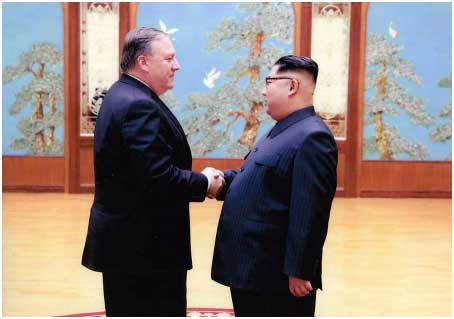 WASHINGTON DC, Apr 30 2018 (IPS) - For most of the past year, North Korea’s provocative long-range missile launches and a high-yield nuclear test, combined with the reckless threats of “fire and fury” and “preventive war” from the White House, have raised tensions and increased the threat of a catastrophic conflict in the region. Some of us warned that nuclear war was closer than at any point since the Cold War.

Now, in an extraordinary turnaround, an uneasy détente has emerged. North Korean leader Kim Jong Un announced on Jan. 1 that he wants to ease tensions with South Korea, and high-level talks between officials of the two governments were held in advance of the Winter Olympics.

Through South Korean intermediaries, Kim extended a summit offer to U.S. President Donald Trump, who, to the surprise of many, immediately accepted. Although Trump deserves credit for being so bold as to agree, the North Korean nuclear problem will not be resolved in one meeting, especially if he goes off-script, acts impulsively, or carries unrealistic expectations.

The direct dialogue is overdue, it is historic, and it carries high stakes. Trump and his entire national security team must understand that this diplomacy will require preparation, patience, and persistence.

To succeed, they must maintain a principled but balanced approach closely coordinated with key allies in Seoul and partners in Beijing. Further, Washington will need to address Pyongyang’s own security and economic concerns.

Further, Kim announced April 21 that he is suspending ballistic missile and nuclear testing, is closing the Punggye-ri nuclear test site, and will “join the international desire and efforts for the total halt” to nuclear tests. South Korean President Moon Jae-in and Kim reaffirmed their intentions at their successful—and historic—inter-Korean summit April 27.

Kim is clearly confident about his position going into the summit with Trump, and he appears to be preparing his people for potential additional steps toward denuclearization if U.S. leaders negotiate in good faith and can deliver on their promises.

The table is finally set for a meaningful, sustained dialogue between Washington and Pyongyang on verifiable denuclearization, normalizing diplomatic ties, and negotiating a formal end to the Korean War.

Key near-term U.S. goals should be to solidify North Korea’s testing suspension, to bring about a halt to its fissile material production, to win the release of three captive U.S. citizens, and to discuss measures to further reduce tensions on the divided peninsula.

North Korea’s no-nuclear-testing pledge is very significant. The North already has a proven high-yield warhead design, but additional tests could be used to achieve military and technical advances.

Solidifying a halt to further ballistic missile tests is also crucial because it can possibly stop the North Koreans just short of developing a reliable system to deliver their high-yield warhead. Halting production of fissile material and verifying the freeze is the next logical step, as it would put a ceiling on the potential number of nuclear devices North Korea could assemble.

If Trump could achieve all of this, it would be a major breakthrough, even if falls short of the more sweeping task of negotiating the verifiable denuclearization of the Korean peninsula. But Rome was not built in a day.

To achieve the many additional steps toward the long-term goal of denuclearization of the peninsula and a durable peace regime, the Trump-Kim summit should also produce agreement on a balanced framework for sustained, direct, high-level negotiations on these and possibly other issues.

Trump has said that he will not repeat the mistakes of the past negotiations; likewise, Kim said April 27 that he doesn’t want a repeat of the past “where we were unable to fulfill our agreements.” Indeed, previous agreements had been partially successful in curbing North Korea’s capabilities, but fell apart in later stages of implementation.

These negotiations will demand even greater persistence, patience and political will. Kim’s nuclear and missile capabilities are more substantial and dangerous today, his bargaining power is greater, and the cost of failure is higher. And if Trump is foolish enough to withdraw from the successful 2015 multilateral nuclear deal with Iran, Kim will be more reluctant to make concessions.

Members of Congress, for their part, should demand clarity about the administration’s strategy and regular reports on the negotiations. Yet, they should refrain from demanding specific outcomes or immediate results. The stakes are too high and the opportunity too great for such games.

Now, after a period of reckless nuclear brinksmanship, the hard work of pursuing disarmament diplomacy begins. Can Team Trump pull this off? As the president often says, “We will see.” It will not come easy, but it is better than the alternatives.

*The link to the editorial in the May issue of the journal Arms Control Today:
https://www.armscontrol.org/act/2018-05/focus/freezing-reversing-north-korea%E2%80%99s-nuclear-advances