UNITED NATIONS, Jun 29 2018 (IPS) - The World Drug Report 2018, launched this week by the United Nations Office on Drugs and Crime (UNODC), highlighted the importance of gender in drug consumption and behaviour, suggesting it is essential to provide different types of health-care and legal solutions. 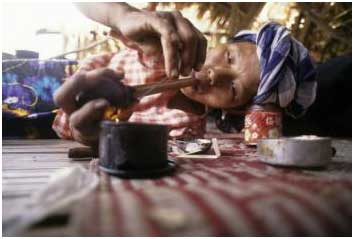 Only one in five women addicts seeks treatment for drug abuse, the president of the International Narcotics Board (INCB) has warned. Credit: UN Photo/D. Gair

As Marie Nougier, Head of Research and Communications at the International Drug Policy Consortium (IDPC) told IPS: “There is certainly no one-size-fits-all strategy towards drug use – there should be a range of evidence-based prevention, harm reduction, treatment and other health and social support services that are able to respond to the many problems women may face when using drugs”.

About 5.6% of the global population between 15 and 64 years old -275 million people- used drugs during 2016, according to the report. From those, 31 million suffer from drug disorders, which means that they need treatment.

However, drug treatments are only reaching one sixth of drug consumers. The consequences are terrible, with 450,000 people dying in 2015 due to drug consumption. What’s more, global opium production increased by 65% from 2016 to 2017, which is the highest estimate so far.

The report has been separated into five sections, the fifth being about the effect that gender has on drug usage, especially in terms of women. The others include information such as an executive summary, drug demand and supply, drug markets, and drugs and age.

Whereas women mostly associate drug consumption with an intimate partner, men tend to consume substances with other male friends. And while women tend to suffer more from depression, anxiety, or other mental health conditions, men suffer from externalized problems like conduct disorder, such as “attention-deficit hyperactivity disorder and antisocial personality disorder”.

These are some of the gender-based differences in drug consumption that the report points out, but what stands out most in terms of finding long-term solutions is that women “may also have experienced childhood adversity such as physical neglect, abuse or sexual abuse”.

When this is coupled with strong drug policies, the result is a higher proportion of women sentenced for drug-related offences. Women are also shown to be more affected by post traumatic stress disorder.

Nougier from IDPC told IPS: “Drug policies focusing on punishing people for drug use have greatly contributed to drug-related health issues, including the spread of HIV and hepatitis C and overdose deaths, as the fear of arrest and punishment deters people from accessing the harm reduction and treatment services they may need”.

She added: “Punitive approaches have also increased the levels of stigma and discrimination against people who use drugs”.

Additionally, according Nougier, punitive approaches tend to affect women more, as there are no treatment programs that include a gender approach. Their needs -due to their background and consumption behavior- are different.

Also “because of the gender inequalities that continue to prevail in our societies, with women facing significant stigma for breaking with the role of the ‘good woman’ or the ‘good mother’ for using drugs. In some countries, using drugs during pregnancy is a criminal offence, which acts as a serious barrier for women to seek prenatal healthcare support or drug services”.

Kamran Niaz, epidemiologist at the United Nations Office on Drugs and Crime, told IPS that “women have better long-term outcomes when they receive treatments that focus on the issues more commonly found in women with drug use disorders compared to treatments that lack such a women-centred focus”.

Asked about gender-specific treatments, Niaz added: “Prevention of drug use among girls/women requires investing in family-based prevention addressing vulnerabilities that appear to be unique to girls”. He continued: “in order to address the issues of drug use disorders among women, treatment services and programmes should be tailored to the needs of women and pregnant women”.

Some of the programmes that Niaz found specific for girls included: “dealing with stress, depression, social assertiveness, body image and improving relations and communication with parents and other significant others”.

Pamela Kent, Associate Director of Research at the Canadian Centre on Substance Use and Addiction (CCSA), told IPS: “A more informed and empathetic approach to women’s substance use is required—one that also considers various aspects such as reproductive health, perinatal service and child welfare. It’s important to note that not a one-size fits all—society needs to provide women-centered prevention and treatment resources and responses”.

Regarding the relation between drug use and abuse, Niaz said: “As women with drug use disorders are more vulnerable to domestic violence and sexual abuse, and their children may also be at risk of abuse, a liaison with social agencies protecting women and children is helpful”.

He added: “In addition in the case of child abuse we need programmes to prevent such abuse and, particularly, to support the victims and to address post-traumatic stress disorders among them”.

Kent agreed that abuse is a primary concern: “[The 2017 Life in Recovery from Addiction in Canada survey] showed that females reported greater family violence and untreated mental health concerns during addiction compared to males. In additional, for informal support, females more likely to use technology, connect with an animal, or use art, poetry, writing and yoga compared to males”.

However, not many programs have been implemented that include this gender-based approach. The report adds that the criminal justice system is designed for male offenders and thus forgets any nuances that relate to women.

Nougier said: “We continue to see a concerning lack of access to treatment by women dependent on drugs, both in the community and in prison. Available services are generally designed by and for men, and are often unable to tailor to the specific needs faced by women. In closed settings, most harm reduction and treatment services are only available in male prisons”.

Some facilities are starting to adapt themselves to these proven needs, according to Nougier. “Dome harm reduction and treatment facilities have adapted their services to better engage with women with specific opening hours for women only, a space for children while women come to the centre, and the provision gender-specific services (e.g. legal aid or support to respond to domestic violence, sexual and reproductive health support, etc.)”, she said.

Niaz agreed that “the programmes need to manage the myriad of issues such patients face, and should encompass broader health, learning, and social welfare context in collaboration with family, schools and social services”.