Culture of Peace Embedded in Every Word on the UN Charter

Miroslav Lajčák, President of the current 72nd Session of the UN General Assembly, in his address to the Forum on a Culture of Peace

UNITED NATIONS, Sep 5 2018 (IPS) - As we open this Forum, I will make three main points. First, I want to ask: what does a culture of peace actually mean?

And, frankly it might be different for every person in this room. But I will share some elements, which have stuck with me. 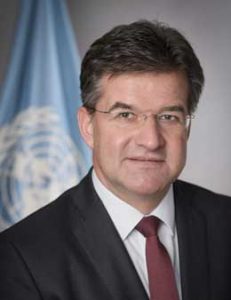 The first is time. Peace takes a lot of time.

It must be built up – block after block, layer after layer. And this must be done, not by the hands of internationals– but by the people on the ground; the people who were there – in their countries, and in their villages – when peace was not.

Cultures do not come about in a day or a week. And neither does peace. A second element is simplicity. “The culture of peace”.

This is a very simple phrase. It can be easily translated into different languages. And it can be understood – even without a degree in philosophy, or years of experience at the United Nations.

Because we all have some idea of culture.

It is around us, every day. It’s in what we do…where we go…how we speak. And if peace is not a part of these everyday habits – then we simply do not have a culture of peace.

And, thirdly, another element is hope. Let’s be frank: a culture of peace is not, yet, a reality.

Conflicts rage on, across the world. International terrorism poses as grave a threat as ever. And political and religious intolerance is rising.

But we have chosen not to accept this, as our fate. In fact, through this resolution – and this Forum – we are saying no.

We are recommitting to the very ideals of the United Nations Charter. We are showing that it is in our power, to “save succeeding generations from the scourge of war”. Not in some places in the world – but in all.

And that is a powerful message of hope. This brings me to my second point – on the United Nations Charter.

The document doesn’t specifically mention a “culture of peace”. But I believe it is embedded in every word.

And I think we are closer now – than we have ever been – to an international system, which can support and promote a culture of peace.

In the past, our tools and mechanisms were designed to react to conflict. They jumped into action when there was an outbreak in violence, or when a peace treaty was signed.

Now we are opening our eyes. We are asking ourselves the question: what can we do, proactively, to build peace, from the ground up, and to make sure it won’t go anywhere, in the future?

So, we have moved from reactive to proactive; from response to prevention; from concentrating on the effects of conflict to exploring the accelerators of peace.

And central to that has been a renewed focus on conflict prevention and peacebuilding – which are all part of a larger cycle of Sustaining Peace.

Not just in theory. But also, in practice. And here’s the thing: We are doing this. Now.

We are reforming the United Nations’ peace and security pillar.

We are investing more in mediation and peacebuilding capacities.

We are reviewing the way our peacekeeping operations work on the ground.

And we are looking at how our efforts for Sustainable Development and human rights have a direct impact on prospects for peace.

Last April, we all met in this hall. We listened to leaders, policy makers and activists give their take on this new approach to peace. And what we heard was very exciting.

Commitments to preventive diplomacy. Calls for a “quantum leap” in peacebuilding finance. Discussions on coherence and partnerships. And success stories from the ground.

So, it is happening. In this hall. In offices nearby. And in UN country teams and peace operations all over the world.

We are moving our international system towards a culture of peace.

But, as my third point, I want to highlight that, to get there, we need to widen our approach.

We cannot achieve a culture of peace from a hall like this. We need to take action on the ground. And we need new approaches. In some cases, that means a complete re-set.

For example, students all over the world are studying peace theory in university. But maybe we need to start much sooner. Maybe young children should not, only, be learning lessons in maths and history – but also in humanity and peace.

And we must remember: culture includes– not just some – but everyone.

So, gender equality is crucial. Every time a woman is denied her voice, her rights, or her place in society – we are taking a step away from a culture of peace. Also, if young people continue to be excluded from our decisions and processes, we won’t get very far.

So, we need everyone involved. From heads of states and top United Nations officials, to the people who work, for the United Nations, academic institutions or NGOs on the ground.

The late Secretary-General, Kofi Annan, delivered a Nobel Lecture, in 2001. During it, he said, “Peace must be made real and tangible in the daily existence of every individual in need”.

Instead, peace should be something that we can touch, see, feel and experience – on a daily basis. It should be in the air around us or the ground we walk on. It should, in essence, be a culture.

And one that is here to stay.