Ending Poverty is Possible, but it Means Facing up to Inequality – Within & Between Countries 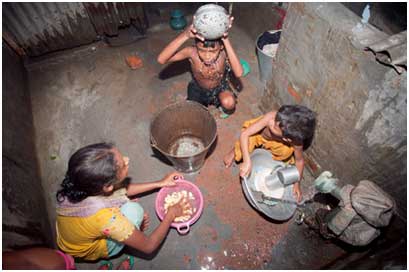 UNITED NATIONS, Jan 28 2019 (IPS) - World leaders have committed to ending poverty everywhere for all people by 2030.

Achieving this aim means facing up to the need for dramatic declines in inequalities – in income, in opportunity, in exposure to risk, across gender, between countries and within countries – over the next decade.

Inequality is a well-recognized barrier to poverty eradication, as well as many other development challenges.

It features in multiple dimensions across the 2030 Agenda for Sustainable Development— the universally adopted plan to promote prosperity and social well-being while protecting the environment.

According to many metrics, income inequality among countries has declined somewhat in recent decades, driven primarily by strong growth in East Asian and South Asian economies.

But there are many countries—particularly in parts of Africa, Western Asia and Latin America and the Caribbean— where income levels have continued to fall further behind, exacerbating income inequalities between countries.

The latest United Nation’s analysis in the World Economic Situation and Prospects 2019 indicates that per capita income levels essentially stagnated or declined in a total of 47 developing and transition economies last year.

Most of these countries have been consistently falling behind for several decades. This poses an enormous challenge as countries strive to reduce poverty, develop essential infrastructure, create jobs and support economic diversification.

Most of the lagging countries are highly dependent on commodities, stressing the importance of both diversification and effective management of natural resource wealth to tap into their development potential.

Several countries have also suffered long-standing armed conflict or civil unrest and political instability. If this trend continues, eradicating poverty and creating decent jobs for all will become increasingly out of reach.

Faster GDP growth alone will not necessarily lead to broad-based improvements in living standards. Deep inequalities also persist in the distribution of income within countries, acting as a major barrier to development progress.

High inequality within countries is associated with social exclusion and fragmentation; weaker institution-building and governance; and increased risk of violence and internal conflict.

Fundamental transformations are needed going forward, to narrow the income gaps between and within countries.

According to UN estimates, without significant changes in behaviour, more than 7 per cent of the global population may remain in poverty by the year 2030, including about 30 per cent of the populations in Africa and the least developed countries (LDCs).

In Africa, where the population is expanding at a rate of more than 2 per cent per year, reducing the level of extreme poverty to below 5 per cent by 2030 will require a combination of double digit GDP growth and dramatic declines in inequality.

This is well-outside the realms of historical precedence. Integrated and cross-cutting policy measures that both raise prospects for economic growth and reduce income inequalities are essential to shift the world towards a more sustainable and inclusive path.

This includes investing in education, health care, resilience to climate change, and financial and digital inclusion, to support economic growth and job creation in the short-term, while promoting sustainable development in the long term.

Macroeconomic stability and a strong development-oriented policy framework, including a well-functioning and robust financial system, are key elements for successfully tackling inequality.

While there is no one-size-fits-all policy prescription that guarantees delivery of a more equal and prosperous society, one overarching message is clear: calls to eradicate poverty are meaningless without concerted and committed policy action to reduce inequality.

* Liu Zhenmin became Under-Secretary-General for Economic and Social Affairs in July 2017. Prior to his appointment, he was the Vice-Minister for Foreign Affairs of China since 2013. He brings to the position more than 30 years of experience in the diplomatic service, with a strong focus on the promotion of bilateral, regional and global issues. He was deeply involved for 10 years in climate change negotiations, including the conclusion of the Kyoto Protocol and the Paris Agreement.