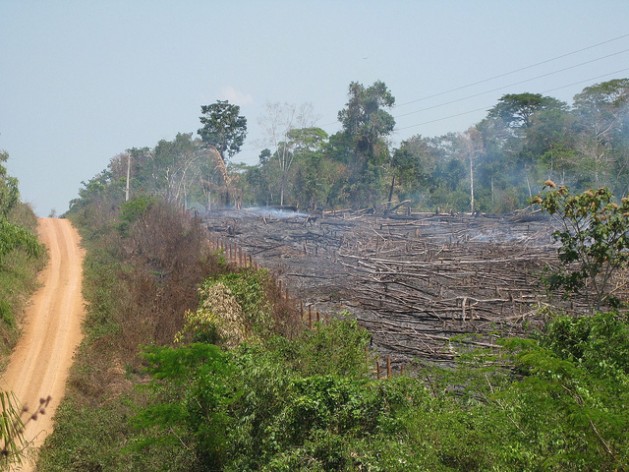 Small-scale slash-and-burn agriculture is one of the deforestation problems in Brazil’s Amazon jungle. Credit: Mario Osava/IPS.

Jan 24 2020 (IPS) - More than half of worldwide GDP is moderately or highly dependent on nature, putting biodiversity loss among the top five risks to the global economy, according to a report presented at the World Economic Forum (WEF) in Davos, Switzerland.

The report, compiled by WEF in collaboration with accountancy firm PricewaterhouseCoopers (PwC), finds that some of the fastest-growing economies in the world are particularly exposed to nature loss, and calls for “a radical reset of humanity’s relationship with nature”.

Around one-third of the GDP of India and Indonesia comes from sectors that are highly dependent on nature, such as agriculture, construction and food and drink, according to the analysis. Africa generates 23 per cent of its GDP in such sectors while in Latin America, the figure is 55 per cent.

These industries rely on extraction of resources from forests and oceans, or rely on nature to provide things like healthy soils, clean water, pollination and a stable climate, the document explains.

“Given their significant nature dependencies, it is critical that these economies with significant exposure to nature loss assess, prioritise and invest in nature,” said the Nature Risk Rising report, presented at the global gathering of business and political leaders on 19 January.

Failure to do so could result in heavy losses for nature-dependent sectors, authors warn. The report says 60 per cent of coffee varieties are in danger of extinction due to climate change, disease and deforestation. If these varieties became extinct, the global coffee market—with retail sales of $83 billion in 2017—would be “significantly destabilized, affecting the livelihoods of many smallholder farmers”, it says.

Risk to life and livelihoods

The report also highlights the pharmaceutical industry’s dependence on tropical forest biodiversity, such as in the Amazon, for new drug discoveries, with 25 per cent of drugs used in modern medicine derived from rainforest plants.

“As tropical forests face threats from felling and wildfires, pharmaceutical companies face losing a vast repository of undiscovered genetic materials that could lead to the next medical – and commercial – breakthrough,” it warns.

It says that 75 per cent of approved anti-tumour pharmaceuticals in the last 70 years have been non-synthetic, with 49 per cent derived entirely from natural products.

Amazon deforestation – which has resulted in the loss of 17 per cent of forest cover since 1970 – could also lead to huge agricultural production losses and longer periods of drought, affecting water availability across the region, the report forecasts.

Akanksha Khatri, head of WEF’s nature and biodiversity initiative, who worked on the report, told SciDev.Net: “Latin American economies are especially dependent on nature. Two of the main economic sectors in Latin America are mining and agriculture which currently are in the top five industries driving nature loss.

“As the impact from nature loss intensifies, soon the economies and people’s livelihoods associated with these sectors will be put at risk,” said Khatri, who believes that countries must treat their diverse resources as valuable knowledge-banks.

“Models suggest that if 20-25 per cent of the Amazon forest is lost, this would lead to increased duration of droughts in the region and annual agricultural production losses of $422 million in Brazil alone.”

Amazon forest losses due to fires in 2019 – many of them started intentionally – are related to cattle rearing and agricultural exports such as soy, said Hernán Giardini, coordinator of forest campaigns at Greenpeace Argentina, Chile and Colombia.

Trade between the two blocs is worth 122 billion Euros and the deal is expected to generate significant new market opportunities through the reduction or elimination of tariffs. However, some EU countries reject products coming from regions with a high environmental footprint.

“Brazil is the leading meat exporter worldwide, but at the same time the deforestation generates conflicts in Europe, where sectors ask their governments not to import products from South America with such low environmental standards,” explained Giardini.

“This is the reason why Amazon fires are jeopardizing the deal, which is also tied to the Paris Agreement and other climate accords.”

Luciana Ghiotto, researcher at Argentina’s scientific and technical research council, CONICET, and the National University of San Martin, Argentina, is the co-author of a broad analysis of the EU-Mercosur deal.

She said: “For Mercosur countries, the agreement implies a deepening of extractivist industries, in particular cows and soy, but it raises criticisms over the consequences for the Amazon and over the need to use more pesticides for agricultural production.”

“Curiously, it’s European companies that ship their chemical products to South America after they are forbidden in European countries,” she added.

For the reasons above, biodiversity loss is one of the five human threats for the next decade, according to another report on Global Risk presented 15 January at the WEF.

The reports are part of the New Nature Economy series, being published by WEF this year, making a business case for action on what it calls the “nature crisis”. It comes ahead of the UN Convention on Biological Diversity COP15 to be held in Kunming, China, in October.

The reports seek to identify “priority socioeconomic systems for transformation” and “scope the market and investment opportunities for nature-based solutions to environmental challenges”, the WEF says.