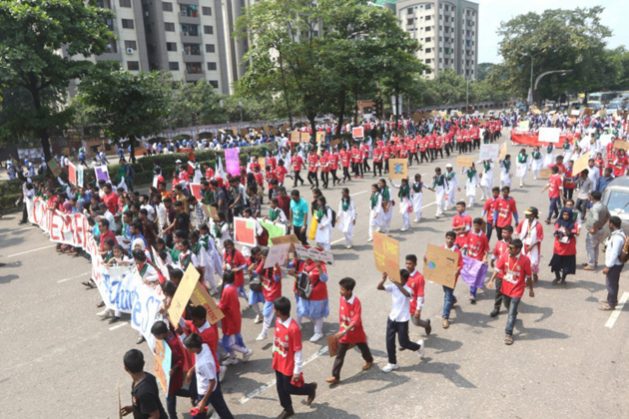 Thousands of children from different schools and colleges bring out a procession at Manik Mia Avenue expressing solidarity with the global climate strike. PHOTO: STAR/PRABIR DAS

While this is indeed a pioneering resolution, it will mean very little unless implemented.

The climate emergency side of the twin track declaration has already received significant priority within national planning and even budgeting by virtue of the clearly visible adverse impacts of climate change that Bangladesh has already started to face over the last few years.

The good news is that the government is about to publish the revised Bangladesh Climate Change Strategy and Action Plan (BCCSAP), which will take us to 2030, while the original BCCSAP from 2009 has reached its end. The most important element in the revised BCCSAP is that instead of having separate and parallel funds and projects for tackling climate change, we now need to rapidly shift into mainstreaming or integrating climate change actions into all national, sectoral and local level plans, as well as into every ministry’s and agency’s workplan going forward.

The upcoming preparation of the 8th Five Year Plan is a great opportunity for the Bangladesh government to again show how to integrate climate change into all chapters of the plan, and not just a stand-alone chapter for environment and climate change.

At the same time, the ministry of finance should be lauded for preparing a climate change budget every year for the last few years, and should be encouraged to include even more ministries in the next year’s budget. It also needs to enhance the monitoring and evaluation of these expenditures to assess their actual effectiveness on the ground.

Also, non-government organisations (NGOs), private sector, education sector and media need to gear up their own actions to tackle climate change so that it is a whole-of-society effort and not just a whole-of-government effort.

Here, it is important to also point out the synergies with the Sustainable Development Goals (SDGs), of which, SDG 13 is explicitly about tackling climate change—hence these efforts at finding synergies across sectors will give us significant dividends in enhancing the quality of our economic development going forward.

When it comes to protecting our biodiversity, which includes both individual species of plants and animals, as well as entire habitats and ecosystems, we are unfortunately in a very bad position as we have failed to protect our natural environment because of the kind of growth we have pursued. We now stand at a very significant crossroad, where a business-as-usual attitude will lead to us losing whatever natural resources we have left in a very short period of time. Hence, protecting the environment while also growing has to be the new agenda going forward. This paradigm shift goes under several terms such as green development or Nature Based Solutions (NBS), but the label is less important than the necessity to acknowledge that every day we are destroying our natural environment bit by bit, and that this must not just stop but be reversed as soon as possible.

This is where the parliamentary standing committee on environment has a very important role to play, as it is the constitutionally mandated body to oversee that national development is protecting and not destroying our natural environment. It’s declaration of the planetary emergency has demonstrated that it is indeed very concerned about these issues. But now it needs to exert its constitutionally mandated power over the executive to ensure that it means what it says.

I would also like to add that there is an extremely energetic resource that they can harness if they wish, namely the youth of our country, starting with all the university students and then high school and even primary school students. The paradigm shift that is needed is to make this agenda everybody’s agenda and not just leave it to government authorities only.

At the same time, the Ministry of Environment, Forest and Climate Change (MOEFCC) has an extremely important role to play within the government, where its role is to try to protect the natural environment against forces, often other powerful ministries within the government, who want to get permission to build over natural habitats. I must say that over the last few decades, the different heads of the ministry have recognised their duty and done their best to try and protect the environment, but have often failed against the desires of powerful interests, both within as well as outside the government.

Hence, we have to realise that protecting our natural environment requires us to fight the forces who want to destroy it in every way possible, from within the government by the MOEFCC, and outside it by conscious citizens, who will oppose any visible destruction of the natural habitat that they see happening anywhere in the country.

The most effective means of protecting our natural environment is for every citizen to see it as her or his duty to do so. I believe we can do it.

Saleemul Huq is Director of the International Centre for Climate Change and Development at the Independent University, Bangladesh.