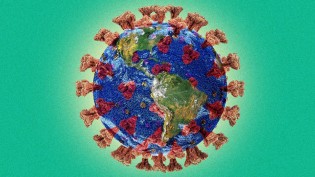 By Saleemul Huq
The Covid-19 pandemic is still having severe impacts on many countries and it is not at all clear how long it will take to play out globally. However, the scale and rapidity of the crisis has already revealed a number of aspects of the global economy and governance that we used to think were unchangeable realities. After the crisis is finally over, we will be faced with a fork in the road. One path will be to try to go back to business as usual as it was before the pandemic. The other path is an opportunity to forsake the "business as usual" model as no longer fit for purpose and move towards a completely different, and indeed much better, future. However, the decision on which path we want to choose will be made now and every decision we make is important in choosing which future pathway we will be on.

By Saleemul Huq
Bangladesh has a long tradition of national development planning under the aegis of the General Economics Division (GED) of the Planning Commission, through the seven Five Year Plans prepared since we became an independent country. Recently, there have been a number of additional types of planning which will need to be well-aligned if we wish to achieve our goal of becoming a climate-resilient country by 2030. Some of these require examination and we need to discuss ways to ensure their mutual alignment going forward.

By Saleemul Huq
At the beginning of January 2019 Bangladesh started to take the required steps to become a climate resilient country by 2030 by achieving transformational adaptation to climate change impacts.

By Saleemul Huq
After a time extension of an extra day, the Rulebook for the Paris Agreement was adopted at COP24 in Katowice, Poland on December 15. It is a significant achievement as it will enable all countries to implement all the different elements of the Paris Agreement in a manner that can be measured, reported and verified in a uniform manner.

By Saleemul Huq
The first week of the two-week 24th Conference of Parties (COP24) under the United Nations Framework Convention on Climate Change (UNFCCC) being held in Katowice, Poland has just ended with a major political difference between the countries who wish to raise ambitions to take faster action to tackle climate change in light of the recent Intergovernmental Panel on Climate Change (IPCC) Special Report on 1.5 degrees, and those who are associated with fossil fuel interests.

By Saleemul Huq
In the run-up to the negotiations under the United Nations Framework Convention on Climate Change (UNFCCC) in its 21st Conference of Parties (COP21) in December 2015, one of the most politically contentious issues was whether the limit of the long-term global temperature rise should be kept at 2 degrees centigrade or changed to 1.5 degrees.

By Saleemul Huq
A year has passed since President Trump announced that the United States would formally withdraw from the Paris Agreement on Climate Change. What has happened since has been a mixture of good and bad—but on the whole, more good than bad.

By Saleemul Huq
The Green Climate Fund (GCF) was set up under the United Nations Framework Convention on Climate Change (UNFCCC) to channel much of the USD 100 billion a year starting from 2020 onwards that the developed countries have promised to provide to developing countries to tackle climate change through both mitigation and adaptation projects and activities.

By Saleemul Huq
The principles of equity, justice and fairness are fundamental to understanding and addressing the challenges of global climate change. This is because the problem has been caused by the emissions of the rich countries for several centuries but will primarily impact the poorest people and poorest countries.

By Saleemul Huq
In the past week, there have been devastating floods in Houston, Texas in the United States of America as well as in Nepal, India and Bangladesh, not to mention China as well.

By Saleemul Huq
The G20 meeting of leaders of the world's 20 biggest economies ended a few days ago in Hamburg, Germany with a strong statement of commitment for implementing the Paris Agreement on Climate Change by 19 of the leaders, with the exception of President Trump who has decided to withdraw the US from the Paris Agreement.

By Saleemul Huq
Since the announcement by President Trump that the US will withdraw from the Paris Agreement to tackle climate change, he has been facing a whirlwind of push backs and rejection by all the 195 countries who are parties to the Paris Agreement (only Syria and Nicaragua did not sign it), and it looks like the US will be on its own on this issue from now on, and is already being termed a rogue state by many.

By Saleemul Huq
The subject of adaptation to climate change has gone through two major phases already and is now on its third phase.

By Saleemul Huq
In the historic Paris Agreement reached in December 2015 at the 21st Conference of Parties (COP21) of the United Nations Framework Convention on Climate Change (UNFCCC), all countries agreed to collectively achieve two global goals. The first was to keep the long-term global temperature increase well below 2 degrees centigrade, or if possible, below 1.5 degrees. The second was to try to achieve a Global Goal on Adaptation (GGA).

Unleashing the Power of the Private Sector

By Saleemul Huq
Over the next two to three decades, there are two major overarching trends that Bangladesh will have to deal with, and therefore have to plan for as well. The first trend is a positive one, which is our desire, and indeed commitment, to graduating out of Least Developed Country (LDC) status within less than a decade. The second, more negative trend, is to tackle the adverse impacts of climate change that will occur along the way.

By Saleemul Huq
Although President Trump has only been in office for less than a month, it is already becoming clear how he intends to carry out implementing his campaign pledges and who he is appointing in his cabinet. It is therefore possible to assess some likely actions and policies on climate change based on his campaign statements and also some of his advisers' statements and most importantly from his own Twitter statements.

By Saleemul Huq
Under the United Nations Framework Convention on Climate Change (UNFCCC), developed countries have agreed to provide developing countries with USD 100 billion per year, starting from 2020 onwards, to help tackle climate change through both mitigation and adaptation.

By Saleemul Huq
After the Paris Agreement on climate change endorsed by every participating country last December at the 21st Conference of Parties (COP21) of the United Nations Convention in Climate Change (UNFCCC), all the participants , including both developing as well as developed countries, have to put in place a clear strategy to not only reduce emissions of greenhouse gases through mitigation actions, but also to adapt to the adverse impacts of human-induced climate change.
ADVERTISEMENT ADVERTISEMENT