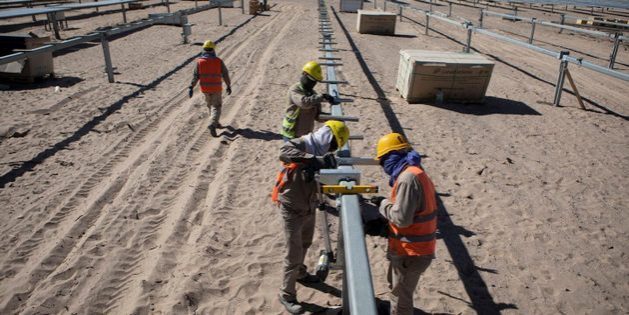 A Chinese backed solar plant in Cafayate, northern Argentina. Such projects would be given the green light by regulators under new proposals for Chinese overseas investment Credit: Alamy/ChineseDialogue

BEIJING, Jan 15 2021 (IPS) - A government-backed coalition of international advisors to the Belt and Road Initiative (BRI) has recommended that China apply more stringent environmental controls over its overseas investments. If adopted, this would be a major departure from China’s usual approach of deferring to host country rules, many of them inadequate, for regulating its overseas investments.

The classification methodology was published on 1 December at a press conference organised by the BRI International Green Development Coalition (BRIGC) in Beijing. It would see coal-fired power plants given a firm red light, while other types of Chinese overseas investments, such as hydropower and railways would need to implement internationally recognised mitigation measures to earn “green” status. On the other hand, solar and wind power are considered green projects that advance the climate goals of the Paris Agreement.

Christoph Nedopil Wang, founding director of the Green BRI Center at the Central University of Finance and Economics and one of the lead authors of the classification methodology, told China Dialogue that the system combines multiple international approaches to green finance.

The categorisation system and an ensuing taxonomy of green, yellow and red projects take inspiration from international standards such as the EU Sustainable Finance Taxonomy, the Equator Principles and performance standards issued by the International Finance Corporation (IFC) of the World Bank Group. It also uses China’s own guidelines for green credit and green bond issuance as references.

For years Chinese companies and financial institutions working abroad have primarily adhered to the “host country principle” which emphasises compliance with host countries’ environmental and social regulations. The inadequacy of the safeguards in many Global South countries, which make up the majority of BRI participant countries, means that the principle is often used as an excuse to lower standards for China’s overseas investments.

This creates a stark contrast between China’s domestic green transition and its footprints across the rest of the world. While clean energy is growing at a breathtaking speed inside China, a large portion of the energy infrastructure Chinese companies are building overseas is coal-based. Many such projects are of the low-efficiency type that China itself has gradually phased out.

Biodiversity threats are also a main concern of many of the BRI’s linear infrastructure projects such as railways and roads that intersect with key protection areas. Domestically, China has implemented an ecological redlining system hailed as a model for reconciling development with the conservation of nature.

There are calls on Chinese actors to follow higher standards in their overseas investments, but so far the response has been limited. None of the major Chinese financial institutions involved in overseas lending, for example, has signed on to the Equator Principles, which requires international standards (such as the IFC’s performance standards) to be applied in low-income countries with underdeveloped safeguards.

In 2019, major Chinese banks such as China Development Bank and ICBC signed on to the Green Investment Principles (GIP) which call for “acute awareness of potential impacts of investments and operations on climate, environment and society in the Belt and Road region”. But mechanisms to translate such awareness into action are yet to be developed.

“The GIP is more market driven”, comments Nedopil Wang, “while our [proposed system] is much more targeted at the regulators.”

How the ratings system works

Red projects require stricter supervision and regulation.These are regarded as creating “significant and irreversible environmental harm” in at least one of the areas of climate change, pollution and biodiversity, or the risk of such harm.

Yellow projects are environmental neutral with moderate impacts. These cause no significant harm, and remaining harms can be mitigated by affordable and practical measures, on a reasonable scale, within the project itself.

Green projects are encouraged. These have no significant negative impact on pollution, climate change or biodiversity, and contribute positively to at least one of these, particularly if they benefit the aims of international environmental treaties and conventions.
The system considers three dimensions of a project’s potential environmental footprint: pollution, climate change and biodiversity. Projects that are contrary to the Paris Agreement objectives, such as those which increase emissions or undermine climate mitigation measures, are considered to cause “significant harm”. Similarly, projects that encroach on key biodiversity areas are given a red rating.

The system has some flexibility built in to allow contextual considerations of a project’s environmental merits. Some projects types, such as railways, may initially raise a red flag for their potential high risks to biodiversity.

But if developers can credibly demonstrate that mitigation measures are taken to prevent or reduce environmental harms, following international standards, they may get a green classification. However, the original red rating will remain as a reminder of the project’s intrinsic high risk.

The creators believe the two-step classification will better equip the system to respond to complex situations on the ground in most countries along the Belt and Road. “The idea is to make the system adaptive,” says Nedopil Wang, who believes that a black-and-white taxonomy may be too rigid in some circumstances. Therefore, “process standards” which detail how a risk should be managed, are also included.

On the other hand, a hydropower station will be given an initial red rating but could earn a green rating if it applies “internationally relevant” hydropower standards for mitigating environmental damage, such as the IFC’s 2015 Hydroelectric Power Standard.

The research team provided an initial classification of 38 project types under 20 sectors, ranging from renewable energy to passenger transport and livestock farming. The grouping of the project types into positive (green), neutral (yellow) and negative (red) lists for the first time creates a simple taxonomy for BRI projects based on their environmental impacts.

“I can see the value of a taxonomy [for BRI projects] which raises environmental awareness for investors,” a Chinese expert familiar with international green finance safeguards, who is not authorised to take interviews, told China Dialogue. “At the very early stage of a project, when you have a project concept note in front of you, a taxonomy may help you make a snap judgment about whether a sector is in line with your strategy or should be excluded in the first place.”

But she cautioned that Chinese overseas projects are often large-scale and such a taxonomy may be too simplistic to capture their complex impacts, particularly social impacts.

Architects of the new system respond that the taxonomy is for demonstration purposes at this stage, created to illustrate how the classification system can be run. They are planning to refine the list with more technical details and application guidelines as a next step. One key recommendation from the advisors is to link the system with more comprehensive environmental impact assessments for red and yellow projects.

The international team proposing the system also recommends it be embedded into China’s decision-making processes on Belt and Road projects. According to their analysis, China’s central government agencies such as the National Development and Reform Commission (NDRC) and Ministry of Commerce (MOFCOM) all have power to regulate overseas investment, but currently environmental considerations are not reflected in their approval processes.

“The positive and negative list will provide a foundation for governmental bodies to make sure overseas investment is in line with climate and environmental goals,” says Wang Ye, a green finance analyst with the World Resources Institute (WRI), who co-created the system. One key recommendation from the team is to develop an “exclusion list” of projects irreversibly harming the environment.

Yuan Feng, deputy director general of the NDRC’s Department for Regional Openness, which oversees the development of the BRI, offered his blessing at the press conference where the system was presented.

But Nedopil Wang admits that the appetite of regulators to adopt such a system is hard to gauge. It is noteworthy that the Ministry of Ecology and Environment (MEE) which hosts the BRIGC, does not have formal regulatory power over project development outside China’s borders.

Experts have also opined that green catalogues, which encourage certain types of investments, are easier for regulators to consider than exclusion lists, which often go beyond their legal authority. China’s own environmental laws have yet to regulate greenhouse gas emissions with binding force, they noted. Positive lists such as the green bond catalogue have so far been the mainstay of domestic actions to steer finance toward greener projects.

There are signs that some regulators might be more receptive of the recommendations. On 25 October, five central government agencies, including the central bank, the MEE and the banking regulator, issued a joint guidance for the country’s financing system to better serve China’s 2060 carbon neutrality goal. It specifically encourages financial institutions to support low-carbon development along the Belt and Road.

There is hope that China’s financial sector may adopt the classification system and apply differential treatment to overseas projects: favourable financing conditions for “good practice” projects and stringent conditions for risky ones.

“The China Banking and Insurance Regulatory Commission (CBIRC) has been involved in designing the system, so that’s a good sign,” Nedopil Wang told China Dialogue. “The de facto application [of the system] really depends on the specific champions within the different regulators.”

“Incorporating environmental risks into policy and finance practices requires these champions to push it relentlessly inside the system, like woodpeckers that always hit the same spot without getting a headache,” he said. “[Adopting the classification system] makes reputational sense and environmental sense for China today. But it requires a really different approach to some of the decision making.”