UNITED NATIONS, May 2 2021 (IPS) - In the contemporary world of journalism, female reporters face a double jeopardy: they are increasingly targeted both as journalists and as women– particularly in repressive regimes and misogynistic societies.

As the United Nations intensifies its campaign for women’s rights worldwide—even as it annually commemorates World Press Freedom Day on May 3 — one of the questions lingering in the minds of women activists is: Is press freedom incompatible with gender empowerment?

Marianna Belalba Barreto, Civic Space Cluster Lead at CIVICUS, the global civil society alliance based in Johannesburg, told IPS the CIVICUS Monitor has documented many cases of women journalists facing online harassment and the gendered nature of it.

In its annual report: People Power Under Attack (PPUA) 2020, CIVICUS documented the use of intimidation as a tactic to deter journalists and human rights defenders (HRDs).

In particular, several cases of intimidation of women journalists were documented in the Balkan region, with threats often gendered in nature.

In North Macedonia, a woman journalist received messages via Facebook and Twitter containing verbal abuses and hate speech. She received dozens of messages threatening her with rape as well as death in response to her work.

In Bosnia and Herzegovina a woman journalist was threatened for reporting on an environmental rights story.

In Bulgaria, a woman journalist, whose story portrayed a far-right group in a negative light, had to flee the country with her family after allegedly receiving threats from unknown people against her and the family, with her personal information leaked online.

The UN Educational, Scientific and Cultural Organization (UNESCO) in Paris and the Washington-based International Center for Journalists (ICFJ) conducted a global survey last year to assess the scale and impacts of online violence targeting women journalists, “and to help identify solutions to this pernicious problem.”

ICFJ says it is the most comprehensive and geographically diverse survey ever undertaken on the theme, having been offered in five languages and receiving responses from 714 women journalists* across 113 countries. 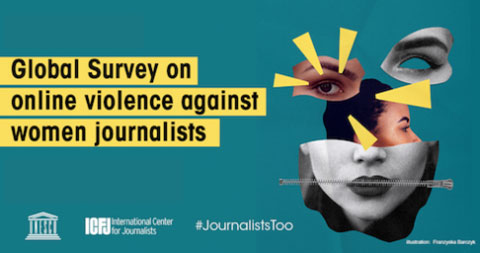 Lucy Westcott, James W. Foley Emergencies Research Associate at the Committee to Protect Journalists (CPJ), told IPS women journalists around the world face a number of safety hazards while reporting, and risk having their voices silenced for being both journalists and women in public life.

CPJ has spoken to women journalists across the world—including in many of the countries highlighted from the UNESCO-ICFJ report, such as Brazil, South Africa, the U.K. and the U.S.—who described dealing with threats to their safety while reporting, online harassment, misogynistic attacks, and threats of sexual violence and death.

“Online harassment continues to be one of the biggest risks to the safety of women journalists globally, and online threats can and do spill over into a real-life setting. The impact of online harassment is far-reaching, and can also result in trauma and mental health difficulties, said Westcott, a former staff writer for Newsweek, and UN correspondent for Inter Press Service (IPS) news agency.

She added: “Journalist safety is a press freedom issue, and women journalists should be able to do their job and report the news without fearing for their safety and livelihoods. Editors need to be aware of the risks their female journalists face, and help them take steps to mitigate those risks.”

Tara Carey, Head of Media at Equality Now told IPS women journalists around the world are speaking out about their experiences of online violence and harassment, and studies are reporting a disturbing increase in misogynistic digital abuse targeting female journalists.

“Online trolling and psychological abuse manifests in various ways and is carried out to intimidate, stigmatize and silence women. It can range from sexual harassment, and threats of sexual and physical violence, including murder, through to privacy violations such as hacking, non-consensual dissemination of intimate images, and “doxing”, which involves personal information and contact details being leaked to the public.

“Trolling is sometimes part of an orchestrated campaign involving multiple attackers, and abuse is often worse when it intersects with other forms of discrimination, such as associated with race, nationality, religion, caste, ethnicity, and sexual orientation,” she said.

Online violence and harassment can take a heavy toll, leaving those who are targeted feeling stressed, scared, depressed, and in some instances, at greater risk.

Worryingly, digital abuse is closely associated with offline violence, with many women journalists confirming they have experienced threats, abuse or assault in face-to-face encounters whilst working, said Carey.

“This onslaught is curtailing women’s participation in the media and undermining our ability to engage freely in public debate, report on contentious issues or challenge discrimination. Some women are being pushed to censor what they say, withdraw from public online conversations and frontline reporting, or even abandoning journalism entirely.

“Online abuse against women journalists is an attack on freedom of speech and expression. A reduction in female representation in news reporting erodes gender diversity in public discourse and risks marginalizing gender-sensitive reporting on issues impacting women and girls,” declared Carey.

Guy Berger, Director for Policies and Strategies, Communication and Information, at UNESCO, says, “this violence harms women’s right to speak and society’s right to know”.

“To tackle this increasing trend”, he adds, “we need to find collective solutions to protect women journalists from online violence”. This includes strong responses from social media platforms, national authorities and media organizations.

Belalba Baretto said CIVICUS also continues to document cases in different regions of the world, as indicated by the following examples:

2. Geri Scott, the Yorkshire Post’s Westminster correspondent, faced online harassment following her appearance on the Andrew Marr Show TV programme on BBC One. Following her appearance on the show, Scott was targeted by an “online trolling campaign”, when she received 52 Instagram follow requests and “abusive messages and even rape threats: https://monitor.civicus.org/updates/2020/12/15/peaceful-assembly-under-threat-crackdown-environmental-and-blm-protesters

3. In Brazil, CIVICUS documented several cases (https://monitor.civicus.org/updates/2020/03/28/journalists-under-assault-brazil-judicial-harassment-smear-campaigns-and-vilification/). In addition, a report published by the Associação Brasileira de Jornalismo Investigativo (ABRAJI) on violence against women journalists in Brazil, identified 20 attacks on Brazilian women journalists between January 2019 and February 2020, including misogynistic and sexist offences, smear campaigns and disclosure of personal information. Of the 17 cases recorded in 2019, 13 were carried out by members of the federal and state congress, ministers and President Bolsonaro himself. 84% of the journalists interviewed in the study also said they had faced gender-based violence at work.

4. News outlet Prensa Comunitaria and their women journalists were subjected to a smear campaign in conservative media and on social media for their coverage of the International Women’s Day march held on 8th March 2020 in Guatemala City: https://monitor.civicus.org/updates/2020/05/12/journalists-denounce-guatemala-government-hostility-towards-press/

Carey of Equality Now said: “Dealing with online abuse mustn’t fall on the shoulders of those being targeted. Media houses need to develop and implement gender-specific guidelines and training that incorporate anti-harassment policies. Women journalists should feel comfortable raising concerns about abuse and newsrooms should take responsibility for ensuring they feel safe and supported.

“Laws need to be updated and implemented to address this problem. Criminal justice systems should be providing support and redress to victims and punishing perpetrators. Justice being done, and being seen to be done, is important both for the individual and because consequences can act as a deterrent for others.

“There also needs to be better awareness and understanding amongst law enforcement agencies and social media companies, along with the adoption of zero-tolerance policies that involve duty bearers taking swift and appropriate action against perpetrators.”

*Thalif Deen, Senior Editor at the UN Bureau of Inter Press Service (IPS) news agency, is the author of a newly-released book on the United Nations titled “No Comment and Don’t Quote Me on That” available on Amazon. The link to Amazon via the author’s website follows: https://www.rodericgrigson.com/no-comment-by-thalif-deen/