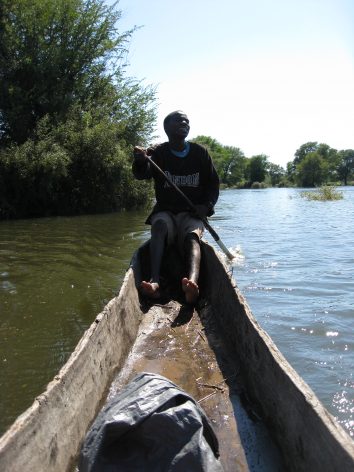 A large part of the oil exploration areas in both Botswana and Namibia falls within the Okavango River Basin which flows into the Okavango Delta, a UNESCO World Heritage Site. Fracking is banned in some countries and has been blamed for serious water pollution, among others, and threats to the regional water supply are among environmentalists’ biggest concerns.Credit: Servaas van den Bosch/IPS

BRATISLAVA, Jul 8 2021 (IPS) - Wildlife and environmental campaigners have called for international action as concerns grow over a project to create a massive oilfield in one of Africa’s last wildernesses.

ReconAfrica, a Canadian oil and gas company, has licensed drilling areas in over 34,000sq km of land in parts of northern Namibia and Botswana that overlap with Africa’s Kavango-Zambezi Trans-frontier Conservation Area (KAZA), which includes land in Angola, Botswana, Namibia, Zambia, and Zimbabwe.

A large part of the exploration areas in both Botswana and Namibia falls within the Okavango River Basin which flows into the Okavango Delta, a UNESCO World Heritage Site which supports the world’s largest remaining population of endangered savanna elephants, as well as dozens of other endangered or vulnerable species such as rhinos, wild dogs, and pangolins. It is also home to 200,000 people.

Campaigners fear the project could do untold damage to the delta’s ecosystem, threatening already endangered wildlife, the environment, and the livelihoods of the hundreds of thousands of people who live on the land.

But as international media attention on the project has also grown, some foreign politicians are raising concerns too.

Last month US Senator Patrick Leahy and Congressman Jeff Fortenberry urged senior officials to launch a government investigation of the project under the Defending Economic Livelihoods and Threatened Animals (DELTA) Act, which is designed to protect areas like the Okavango Delta.

And groups working to raise awareness of the project and its potential effects say international co-operation is needed and pressure from outside Africa must be brought to bear to stop the project going ahead for the good of not just the Delta, but the entire globe.

Ina-Maria Shikongo, an activist from Fridays for Future – Windhoek, which has led a public campaign against the project, told IPS: “We have no choice but to get this stopped. Local and international co-operation is needed because this does not affect just us here, but everyone, everywhere.

“ReconAfrica says there is the potential to extract 120 billion barrels of oil from this field. Can you imagine what all the build-up of toxins, from that, the emissions, everything, is going to do to already rising global temperatures?

“Even though we in the global south are feeling the effects of projects like these most, the global north is feeling them now too, with heatwaves. Everything is connected, all over the world. There is only one global carbon budget, and this project will use up a lot of it.”

ReconAfrica began drilling test wells in Namibia at the end of last year and if the tests are successful, hundreds of wells are expected to be drilled in the area.

The company’s own reports have suggested that the oilfield could potentially generate up to 120 billion barrels of oil, making it one of the largest oil finds for decades.

Although the licences were granted in 2015, criticism of the project has  grown sharply over the last 18 months as details of it have emerged, especially suggestions in company promotions to investors that fracking, which involves blasting liquid at high pressure into subterranean rocks to extract oil and gas, could be used.

Fracking is banned in some countries and has been blamed for serious water pollution, among others, and threats to the regional water supply are among environmentalists’ biggest concerns.

Shikongo explained: “The big problem is our water. We have a very fragile ecosystem, we rely on the water that is underground. If that water gets poisoned, what is going to happen?

“Wildlife, local people, they all rely completely on our water, and if it is poisoned then you could destroy the local food system.”

Rosemary Alles, co-founder of the Global March for Elephants and Rhinos conservation campaign group, told IPS: “ReconAfrica has continued to deny that fracking is in the works; however, there is no inevitability that the company will not frack, despite its rhetoric du jour. The concern is legitimate. If fracking takes place, the immediate potential impacts in the context of waterways and air pollution will be devastating.”

Meanwhile, there are serious concerns about the impact operations could have on local wild animals, especially some of the 130,000 elephants which the Okavango Delta supports.

Conservationists point out that vibrations used in the exploratory work for the field, including in seismic surveys, can disturb elephants, while the inevitable rise in construction, road-building, and accompanying traffic in the area could push the animals away from established migratory routes and closer to villages and agricultural areas, creating easier access to hitherto inaccessible elephant habitat for poaching and a potential exacerbation of already growing human-elephant conflict.

One expert at a conservation group in the area, who asked not to be named, told IPS: “If this company is allowed to start drilling for oil in the Delta it will be a major environmental crime with inevitably devastating impacts on the natural world. In terms of what it will mean for elephants: until we know the scale of the operation it’s hard to estimate exactly, but history shows that oil extraction always means environmental disaster and this is right in the middle of the last wilderness in the elephants’ last stronghold: the KAZA.”

The project will also impact local communities and farmers, and there are concerns that these groups have not been engaged properly in consultations over the project.

UK-based Environmental Investigation Agency (EIA) has pointed out that there are hundreds of working farms within ReconAfrica’s drilling area. But in a recent press release, the group said that it was “far from transparent how, or indeed if, these communities are being consulted”.

It pointed out that the public consultations on the oilfield project have been either online or in person, and the vast majority of those living in ReconAfrica’s license area have limited or no access to the internet and the COVID-19 pandemic has severely restricted travel and public meetings. The meetings are also regularly conducted in English, which is not the first language for many locals.

“It is unclear whether their voices are being heard,” EIA said.

ReconAfrica has sought to allay all these fears. It has said it has currently been granted licences for exploratory work which do not allow fracking, and its officials have repeatedly said they are only interested in conventional extraction.

It has also issued official statements saying it believes the regional energy industry can be “developed in an environmentally and socially responsible manner that is accountable and supports the development and delivery of much-needed economic and social benefits….” and has pledged to take measures to address potential issues with noise and vibration affecting local wildlife when doing work.

Critics have questioned the validity and integrity of the Environmental Impact Assessments conducted for the project, but the company has rejected this criticism and any suggestions it is not meeting full legal requirements for the project.

In official statements it has stressed that it is “committed to continuing to work closely with, and under the direct oversight of, the governments in both countries, as well as their regional and traditional authorities, to ensure we continue to comply with relevant laws and regulations throughout all the stages of our operation”.

And it has claimed that its public consultations have been well-attended and welcomed by locals – although this is strongly disputed by many who went to them.

ReconAfrica has also highlighted the local economic benefits of the project, saying it will bring jobs and growth to the region – something government officials have also stressed.

Tom Alweendo, Namibia’s Minister of Mines and Energy, said in an interview with international media earlier this year: “Any volume of oil that is commercially viable will mean a lot to our economy. Not only in terms of employment, but income that would come into the treasury.”

However, environmentalists have questioned both the scale of the claimed local economic benefits and the thinking behind such a project given that only weeks ago the International Energy Agency said no new oil and gas fields must be exploited from this year on to ensure global energy-related carbon dioxide (CO2) emissions were brought down to net zero by 2050 and keep global heating within safe limits.

Shikongo, whose Fridays For Future – Windhoek has dubbed the oilfield a “carbon gigabomb”, said: “This project will only generate an income for a very few, but it will take away the livelihoods of millions of people. The oil needs to be kept in the ground.”

She re-iterated calls for global co-operation to stop this, and similar projects, and said there needs to be a move away from the “neo-colonialism” behind such projects.

“We need to stamp out this neo-colonialist system – Africa cannot continue to be treated simply as a resource for the global north. The global south and global north need to work together on this, because it affects us all. We’re all humans,” she said.

Alles added: “All western governments must apply pressure, particularly the USA and Canada. The DELTA Act could prove to be a means to an end. The possibility of bailing out the Namibian government must be on the front burner – it must be a point of conversation.”