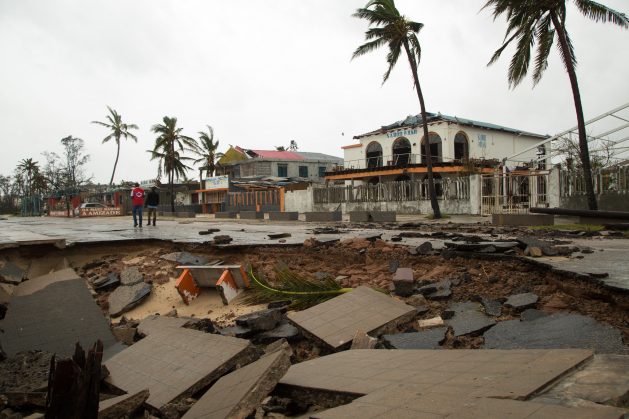 The Southern African region is particularly vulnerable to climate change while only being responsible for a fraction of emissions. It is hoped that COP26 will deliver tangible benefits to the area which has already suffered severe impacts of climate change like the effects of Cyclone Idai, Mozambique, in March 2019. Credit: Denis Onyodi: IFRC/DRK/Climate Centre

Johannesburg, Oct 26 2021 (IPS) - COP26 is almost upon us, and dire warnings abound that it’s boom or bust for a greener future. Meanwhile, everybody boasts about what they will do to cool down our planet, but there is a disjuncture between talk and action. Even Queen Elizabeth II of the host country, the United Kingdom, has grumbled publicly that not enough action is taking place on climate change.

In the Southern Africa region, the SADC’s member countries are clear that the developed countries must stump up the money to help them deliver their promises to reduce carbon emissions and carry out a raft of measures to combat global warming. All the SADC countries are signatories to the Paris Agreement.

The region has joined the cry of other African countries that the continent suffers most from climate change but hardly contributes to the causes of the phenomenon – emitting less than 4% of the world’s greenhouse gasses.
According to research undertaken on behalf of the UN, climate change adaptation needs for Africa were estimated to be $715 billion ($0.715 trillion) between 2020 and 2030.

In southern Africa, each country has its own Nationally Developed Contribution plan for dealing with climate change, including costs. Of course, funding will be needed to achieve these goals. Developing countries have pledged a $100bn annual target to help the developing world tackle climate change. All the Southern African countries will need a slice of this funding. The Green Climate Fund was established under the Cancun Agreements in 2010 as a dedicated financing vehicle for developing countries.

In the lead up to COP26, the fund is under scrutiny. Tanguy Gahouma, chair of the African Group of Negotiators at COP26, has said: “African countries want a new system to track funding from wealthy nations that are failing to meet the $100bn annual target.”

The Organisation for Economic Co-operation and Development (OECD) estimates this funding stood at $79.6bn in 2019. OECD data reveals that from 2016-19 Africa only got 26 percent of the funding.

Gahouma said a more detailed shared system was needed that would keep tabs on each country’s contribution and where it went on the ground.

“They say they achieved maybe 70 percent of the target, but we cannot see that,” Gahouma said.
“We need to have a clear road map how they will put on the table the $100bn per year, how we can track (it),” he said. “We don’t have time to lose, and Africa is one of the most vulnerable regions of the world.”

Amar Bhattacharya, from the Brookings Institution, says about the fund, “Some progress has been made – but a lot more needs to be done.”

Denmark’s development coordination minister Flemming Møller Mortensen has warned that only a quarter of international climate finance for developing countries goes to adaptation.

COP26 may turn into a squabble over money and perhaps an attack on developed countries as they are blamed for creating the problems of climate change in the first place by using fossil fuels for the last two centuries. G20 countries account for almost 80% of global greenhouse gas emissions.

Again, it is all about the money. Many developed countries do not want to change; their economies (and their rich elites) are wedded to fossil fuels. There are also problems with paying for adaptation. Will the rich countries fund the developing countries to green themselves up? 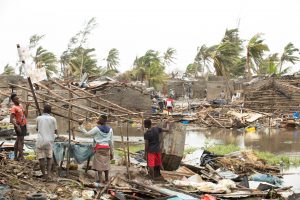 Southern Africa will need to deal pragmatically with the outcomes of COP26 as it becomes crucial to deal with climate change impacts – like the vulnerability to intense storms like Cyclone Idai, which hit Mozambique in March 2019. Credit: Denis Onyodi: IFRC/DRK/Climate Centre

Professor Bruce Hewitson, the SARCHI Research Chair in Climate Change Climate System Analysis Group, Dept Environmental & Geographical Sciences at the University of Cape Town, told IPS: “The well-cited meme that Africa is the continent most vulnerable to climate change impacts is true, as is the common response that Africa needs external aid to implement adaptation and development pathways compatible to climate mitigation. However, such messages hide a myriad of political realities about the difference between what is ideal and what is likely.”

Hewitson argues that what emerges from COP26 is an exercise in hope and belief.

“It’s a tightrope walk trying to balance competing demands and self-interests. At the end of the day, Africa will need to pragmatically deal with a compromised outcome and face the climate challenges as best possible under limited resources,” he says.

If Africa goes to COP26 with a begging bowl attitude, it could face the risk of dancing to the strings of the powerful and rich nations.

“Climate change impacts Africa in a multiplicity of ways, but at the root is when the local climate change exceeds the viability threshold of our infrastructural and ecological systems. Hence, arguably the largest challenge to responding to climate change is to expand and enable the regional capacity of the science and decision-makers to responsibly steer our actions in an informed and cohesive way; Africa needs to lead the design of Africa’s solutions,” says Hewitson.

While he argues that some of the best innovation is happening in Africa, it requires resources, and the COVID-19 pandemic has decreased international funding.

“Each community has unique needs and unique challenges, needing unique local solutions that are context-sensitive and context-relevant, and this will inevitably include the pain of some socio-economic and political compromise.”
The southern African region’s climate woes chime with the problems faced by a legion of developing countries. We have Mauritius’s threatened Indian Ocean islands, Seychelles, Madagascar, Comoros and those offshore of Tanzania and Mozambique, plus many thousands of miles of coastline. We have inland waterways. We have jungles, forests, vast plains and deserts. All prey to the viciousness of global warming.

The SADC’s climate change report quotes an academic paper by Rahab and Proudhomme that from 2002 “there has been a rise in temperatures at twice the global average.”

According to the SADC, a Climate Change Strategy is in place to guide the implementation of the Climate Change Programme over a Fifteen-year period (2015 – 2030). The plan is innovative in terms of food security, preserving and expanding carbon sinks (which play a major role in stabilising the global climate) and tackling problems in urban areas that cause global warming like high energy consumption, poor waste management systems and inefficient transport networks.

Out of the region’s fifteen member countries, South Africa is the biggest culprit when it comes to greenhouse gas emissions.

South African President Cyril Ramaphosa recently said, “We need to act with urgency and ambition to reduce our greenhouse gas emissions and undertake a transition to a low-carbon economy.”

This is a big ask for the region’s economic powerhouse with entrenched mining interests, an abundance of coal and a huge fleet of coal-fired power stations.

Recently, Mining and Energy Minister Gwede Mantashe said South Africa must systematically manage its transition away from coal-fired power generation and not rush a switch to renewable energy sources.

“I am not saying coal forever… I am saying let’s manage our transition step by step rather than being emotional. We are not a developed economy, we don’t have all alternative sources.”

Angola has some of the most ambitious targets for transition to low-carbon development in Africa. The country committed to reducing up to 14% of its greenhouse gas emissions – commentators have met this with scepticism.
Mozambique, not – as yet – a significant carbon emitter, has potential, through its vast natural gas resources, to provide the wherewithal to heat the planet in a big way.

The Democratic Republic of the Congo – a least-developed country, has committed to a 17% reduction by 2030 in emissions. The DRC has the world’s second-largest tropical rainforest – a major carbon sink.

Other SADC countries that suffer from climate change but do very little to cause it are Lesotho, Swaziland, Botswana, Madagascar, which is currently suffering from a climate-induced famine; Malawi, Tanzania, Namibia and Zambia.

While talking up the need to cut emissions, Zambia’s neighbour Zimbabwe said it would increase electricity and coal supply to the iron and steel sectors, thus adding to emissions.

Mauritius, Seychelles and Comoros are all vulnerable Island economies and have a lot in common with the many other island states throughout the world and are very low carbon emitters but extremely vulnerable to climate change especially rising sea levels.

Despite all the problems emerging in the lead up to COP 26, we need to take to heart the fact that scientists and commentators worldwide are warning that COP26 must deliver a way forward that works for our planet and our people. Southern Africa and the African continent as a whole can contribute with innovation and enthusiasm by tapping into the vast potential of our youthful population.